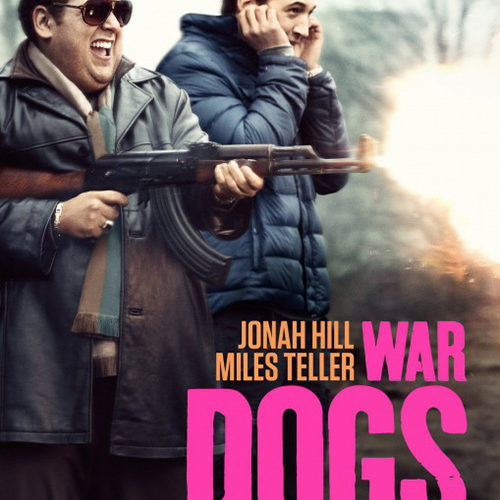 War Dogs, not unlike The Big Short, attempts to make entertainment out of outrageous, behind-the-scenes sausage-making that ultimately had an impact on the American economy. While Todd Phillips‘ film is not as insightful as Adam McKay’s picture, it’s a good time, even if it remains somewhat politically neutral. The boys get rich off of a war they oppose while praising Dick Cheney’s America for making it happen.

Miles Teller stars as David Packouz, a massage therapist living in Miami with pregnant finance Iz (Ana de Armas). At a funeral he crosses paths with his middle school pal Efraim Diveroli (Jonah Hill), a shape-shifter who is whomever you want him to be while he’s standing right in front of you. Fighting for small crumbs on a government bidding site designed to even the playing field, David and Efraim make small arms deals until one appears they can’t resist. The logistics of the deal prove to be an issue until Efraim solves it by suggesting they use Jordan; David thinks he’s referring to another childhood friend.

When the deal goes south, the only option to deliver is to head to Jordan (the country) and smuggle weapons through to Helmand Provence and the “Triangle of Death.” This results in an absurdly cartoonish sequence that ends with the boys carrying suitcases of cash back to the United States. That sequence was, as you’d imagine, a construction of screenwriters Phillips, Stephen Chin, and Jason Smilovic, loosely adapting Guy Lawson’s Rolling Stone article and later book, Arms and the Dudes.

The adventures are fun and the laughs are big, which makes for — depending on the audience — either an entertaining frat-boy comedy with a dose of political commentary or a less-successful political film with some irksome frat-boy humor. Phillips litters the comedy with the usual weed jokes you’d expect, including an intimate sequence involving night vision goggles, which is mildly refreshing for a change. On a structural side, Phillips knows what he’s doing, breaking the film into chapters (each inspired by a line of dialogue) that foreshadow what’s to come. By the time we get to “we’re not talking about crumbs, we’re talking about the whole pie,” we know the duo’s downfall will be swift and abrupt.

Often playing like The Wolf of Wall Street-lite, Phillips occasionally panders to his audience, embracing the worst of the worst in the arms trade. This occurs most notably with Hangover alum Bradley Cooper, who appears as a composite character hanging in the shadows of a Las Vegas arms trade show. He offers guidance and suggests the boys can pull off the biggest deal of their career, arming the Afghan forces during an ammo shortage by way of a Soviet era stockpile rusting away in Albania. There’s also a good deal of fun to be had as Efraim and David’s operation grows, funded by local dry cleaner magnate Ralph Slutzky (Kevin Pollak), a silent partner who believes Efraim’s business ultimately is securing Israel.

Speed reading Lawson’s original story, it sounds as if there’s more to it than what Phillips reveals; more globe-trotting and shady players. Ultimately, Phillips’ comedy lacks the sense of outrage felt by McKay’s The Big Short or the damning ludicrousness of The Wolf of Wall Street. Here, the duo gets away with everything, offering a deal too good to be true, and we all know how that ends. Despite feeling too familiar, as far as late-summer comedies go, it’s hard to deny War Dogs is entertaining and skillfully crafted, playing fast and loose with the actual story, while remaining politically middle of the road.