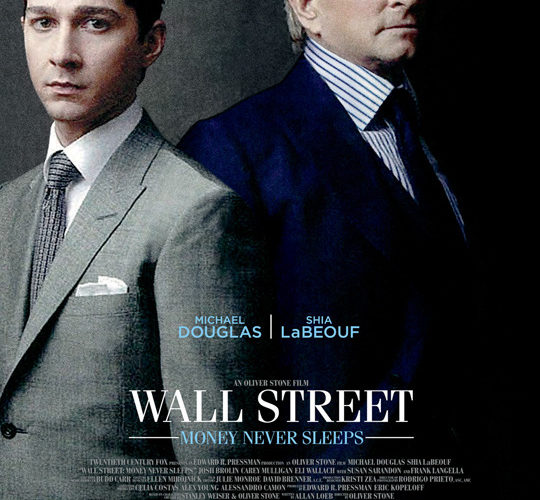 It’s been 23 years since we last saw Gordon Gekko, the amoral stockbroker titan, played by Michael Douglas, in Oliver Stone‘s 1987 Wall Street. Now, we meet him again as he leaves prison in 2001 after an eight-year sentence, having been convicted for a whole host of financial crimes, with the now almost-quaint sin of insider trading just the tip of the iceberg.

Seven years later, Gekko hovers on the outskirts of the Wall Street world he once dominated, hawking his book Is Greed Good? to the masses. It’s a reference to his famous stockholder’s speech in the first film: “The point is, ladies and gentleman, that greed, for lack of a better word, is good. Greed is right, greed works. Greed clarifies, cuts through, and captures the essence of the evolutionary spirit. Greed, in all of its forms; greed for life, for money, for love, knowledge has marked the upward surge of mankind.”

The first Wall Street is now considered a defining film of the go-go Eighties: live fast, spend hard, worry about the consequences later – if at all. Meant to be a cautionary tale, with the cold-blooded Gordon Gekko based on several real-life stockbrokers (Oliver Stone’s father Louis Stone among them), Wall Street has become a touchstone of a whole generation’s worth of greedy capitalists, such as the crooked stockbrokers in Boiler Room, who sit around watching the film endlesslym reciting it’s dialogue by heart.

Stone’s sequel (his first, as a matter of fact) is at its best when negotiating the often bewildering jungle of the modern financial sphere. This ain’t 1987 – hundreds of billions of dollars are at stake every trading day. And even when the language of primes and sub-primes becomes fairly incomprehensible to anyone in the audience without an investment portfolio, Stone tracks the rampant, unchecked greed with the same urgency as the original film.

The core of the first Wall Street was the relationship between father-and-son Bud and Carl Fox (played by Charlie and Martin Sheen), the ambitious Bud allowing Gekko’s influence to seep into every facet of his life, including his father’s airplane company. When Stone tries to insert a beating heart into Money Never Sleeps, Gordon Gekko becomes a reformed ghost of his former self who wants his daughter back… sort of. The family drama is rubbery and unconvincing, even with the excellent Carey Mulligan underplaying her role as the estranged daughter, still so appalled at being related to this man. LaBeouf does well by his role as ambition personified – he’s a hustler with big dreams, a patron of a fusion-energy experiment sucking up cash out in California. His character is neatly conned by James, who, of course, is the real villain of the film.

SEMI-SPOILER AHEAD: Wall Street: Money Never Sleeps opts for a blandly happy ending. I suppose it’s meant to make us lowly consumers feel hopeful about the future of our economy, rather than face the fact that this harrowing uphill battle is really just the beginning. Still, it’s worth seeing, if only to trace our current mess to the cold, bitter hearts of the money-hungry capitalists responsible.