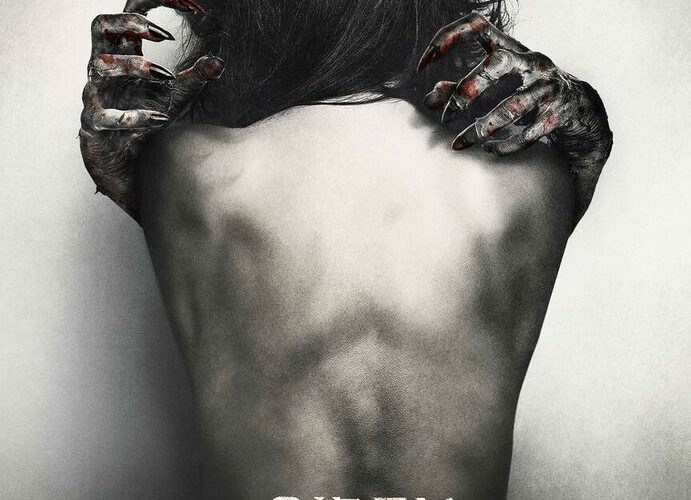 Adapted from the segment “Amateur Night” from anthology film V/H/S, Gregg Bishop‘s SiREN intrigued me mainly because he didn’t create the original. That’s how impactful producers felt this vignette proved, enough to spark interest for an expansion beyond its creative team. David Bruckner — the source material’s director and co-writer with Nicholas Tecosky — stayed on as an executive producer while working second unit, ultimately passing the baton to Bishop in order to focus on his own feature Southbound. In that respect this project could be labeled as a full-fledged remake with screenwriters Ben Collins and Luke Piotrowski crafting an entirely new mythology. They saw Lily (Hannah Fierman) as more than a succubus wreaking havoc upon co-eds. They saw a feral siren desperate to escape from underneath an entrepreneurial occultist’s thumb. I’d argue that the enigmatic Mr. Nyx (Justin Welbron) steals the spotlight from Lily entirely as his business is more than just ensnaring one ancient supernatural being. She might be the catalyst for the chaos that occurs (captivating the attention of Chase Williamson‘s groom-to-be Jonah enough to free her from her chains and unleash Hell during his bachelor party), but Nyx is the one pulling strings in the background to augment the world Bishop brings to life. Because while Lily can push thoughts of pleasure into the minds of those within earshot, rendering them helpless and prone for her vicious attacks, Nyx and his associate Ash (Brittany S. Hall) excise memories to use them later on customers. Collins and Piotrowski utilize this little parlor trick perfectly.

Nyx therefore lets SiREN become more than another monster film where Jonah, his brother Mac (Michael Aaron Milligan), and best friends Rand (Hayes Mercure) and Elliott (Randy McDowell) must run for their lives yet possess the mettle to stop it. Lily is in effect a harbinger of death looming above the story rather than its driving point of conflict. She’s not shy about killing, but she isn’t the enemy. Credit the filmmakers and Fierman for finding this balance between fear and sympathy because it does shine through. She’s the prize — the genie outside the bottle. Jonah wants to go home and Nyx wants his cash cow. They’re the two locking horns. Will Jonah simply play ball for self-preservation or will he help this creature’s quest for freedom? I’ll admit the film starts out a bit shaky in its introduction to the stag party’s participants. After a suitably creepy prologue wherein Mr. Nyx is called upon to clean up a sloppy satanic ritual turned massacre only to discover Lily in the darkness, we are whisked away to Mr. Perfect and his bride-to-be Eva (Lindsay Garrett). Their awkwardness at expanding sexual horizons provides a precursor to the chastity we can expect when the boys hit the road; Mac’s inevitable lecherous lack of restraint supplying the juxtaposition all buddy comedies rely upon. We can guess Mr. Clean will end up enjoying some hedonism and Mr. Unclean will find his dormant soul. It’s all pretty straightforward cliché until a stranger (William Mark McCullough) arrives with an invitation to nightmare.

Once we enter Nyx’s establishment, the way the rules had been utilized is more or less thrown out. It isn’t long before the boys realize things aren’t quite as they appear, but it’s subtle enough to impact us watching. A throwaway line in the background as McCullough carries something through the hallway makes us cognizant of this place’s power and the level of addiction its “drug” manifests. A brief look of confusion and discomfort from Mercure’s Rand peering into a room clarifies Nyx’s commodity of choice. There’s kinky and violent things occurring behind closed doors, but some of it is cathartic and sweet enough to be empathetic. No matter the evil forces at work, good is also being achieved. I can think of no more unsettling a revelation. So while the “monster horror” from Lily is effective in the gory ways with which she kills — as well as the disturbing, comical notion of her blood drenched face smiling razor sharp teeth at the man she’s imprinted upon — the bigger picture grabs us. Bishop captures it with an edge of danger that even sporadically shifts point-of-view to first-person in homage to “Amateur Night’s” format while Collins and Piotrowski continue using memory in imaginative ways (how it’s integrated into a scene of torture and ransom is genius). The filmmakers take special care to ensure that every showcased death has purpose too. Some victims relay a message in their actions or appearance, some lose their lives in service of plot point discovery, and others are allowed purity via sacrifice.

The main quartet of men does their job portraying every-man hubris and fear, each reacting as they’ve been drawn to react. It’s therefore those surrounding them that ultimately excel with complexity and mystery. Fierman embraces Lily’s wide-eyed, naked mix of menace and curiosity to cute/creepy results; Hall’s Ash wonderfully merges an excitement to watch people fall prey to that which they don’t understand and frustration at having to put in overtime to do so; and Welborn relishes Mr. Nyx’s penchant for pontification and his yearning for control. Their trio provides SiREN‘s appeal as self-serving purveyors of enlightenment and destruction in equal measure. Besides an unnecessarily indulgent epilogue, the film’s good versus evil dynamic is successful at extricating itself from any mainstream trappings while also nicely serving its audience.