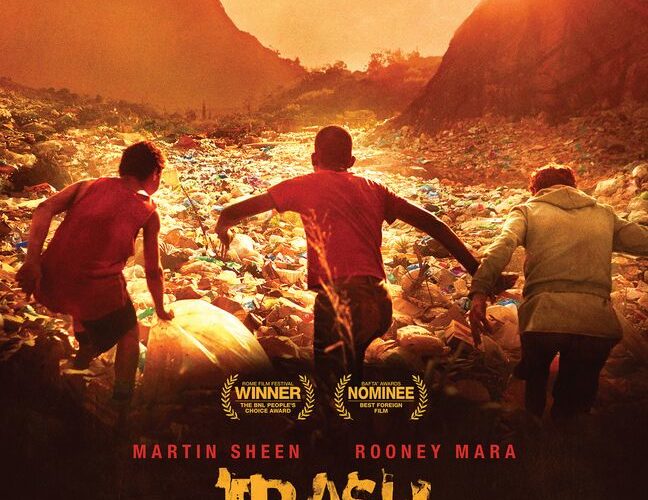 It’s not every day that a three-time Oscar nominee for directing decides on a foreign language film to be his next project, but that’s exactly what Stephen Daldry of Billy Elliot, The Hours, and The Reader fame has done. Following in the footsteps of fellow Brit Danny Boyle—whose journey to India for Slumdog Millionaire earned his sole nomination and subsequently an Oscar win—Daldry takes on the novel Trash written by Andy Mulligan about three impoverished boys working as garbage pickers who find something in their nameless city’s landfill that sparks a police manhunt with grave political stakes. Adapted by Richard Curtis and situated in Brazil with corruption regarding its looming Olympics, this effectively tense adventure also delivers the heart and heroism audiences love.

Will it spell the same success as Boyle’s phenomenon? I doubt it. Not only is Portuguese used so prevalently that this could be considered a Foreign Language contender, but it has a tendency to get somewhat preachy as well—two things mainstream moviegoers don’t have the patience to overlook when standing at the box office. The former is great because I can see many other filmmakers and studios deciding to tell this very Brazilian story in English and therefore take it out of its element before we even sit down. The latter, however, is a bit distracting. Believable in that the boys spend most of their time with Father Juilliard (Martin Sheen) and Olivia (Rooney Mara) learning English and morality, but Sheen’s character can go overboard. That’s not to say Juilliard and Olivia don’t play integral roles in Raphael (Rickson Tevez), Gardo (Eduardo Luis), and Rat’s (Gabriel Weinstein) actions. Their parts are actually larger than I anticipated, believing them to be cameos purely for name recognition. Instead they help ground the boys’ compassion and show that courage does exist despite the rampant police brutality and racism shaping their country. One could say they instill the kindness and strength necessary to keep the boys moving forward with the mission they unwittingly find themselves embroiled in. Most kids—especially poor ones who know turning in the wallet they found would net them one thousand reals—would run at the first sign of danger. These three become more emboldened, acknowledging how important what they possess is.

The details of this reveal themselves slowly through clues and codes needing deciphering, but the stakes arrive as soon as the story begins. This doesn’t just mean a glimpse at the future of Raphael weighing right from wrong with a gun in his hand pointed at an unknown victim’s head either. I mean watching José Angelo (Wagner Moura) whipping through his apartment after visiting the grave of a loved one. He meticulously puts as yet innocuous objects into his zippered wallet, speeding around in hopes of evading the police he knows are coming. It’s his wherewithal to throw the accessory onto a passing garbage truck that makes everything afterwards possible, the first clue towards its importance that Frederico’s (Selton Mello) scare tactics as the officer in charge corroborates. Its truth is hardly unique—the means to take down a mayoral candidate who glad-hands in public while making life unlivable for anyone too poor to assist him (Stepan Nercessian‘s Santos)—but the journey is. Not because Raphael, Gardo, and Rat’s quest comes with unparalleled intellect or impossible physical prowess either. The reason is that they’re only fourteen year olds. Juilliard and Olivia aren’t surprised at their gumption and pride for nothing, these boys are doing things adults with the means to enact change wouldn’t. This is the spirit born from a life knowing the wrong side of the eight ball, of being seen as second-class citizens with no latitude to escape the label. This is their opportunity to break free and possibly help their community follow suit.

Their adventure takes them into some dark places. I’m talking an overcrowded prison teeming with criminals on both sides of the bars, the trunk of a police cruiser for the means of torture, and a rooftop chase with guns drawn—their age of no consequence to men in the pocket of a powerful gangster. This means Daldry and cinematographer Adriano Goldman can have some fun with kinetic camerawork moving through the chaos of Brazil’s city streets. Rat becomes a guide for the other two through less savory places outside the population’s sight while strangers possess a willingness to help their fellow man in solidarity against the cops blindly oppressing them. Even though it’s this trio’s fight, Trash quickly reveals everyone is itching to rise up. Credit Daldry, Goldman, and Curtis too for telling the tale with intrigue and not just a linear A-to-B narrative. Interspersed with the action are short vignettes of the boys giving a sort of deposition, telling their tale without embellishment even if some humor gets added for extra impact. The camera also becomes a supplier of clues with its focus on Angelo’s belongings—each one crucial to carrying on his legacy—and odd vantage points revealing characters hidden from view. With children as the stars, it’s easy to find yourself in positions and places your usual detectives cannot go. The film achieves another level of entertainment as a result because we can’t guess what they’ll do next. Normal rules aren’t in play.

The boys deliver truly engrossing performances full of drama and inexplicably the same amount of optimism despite it. Weinstein’s Rat is the comic relief, but also the farthest down the food chain—a child you can’t help feel sorry for with a heart that inspires. Luis’ Gardo is selfless and hopeful, joyous until reality sets in to render him emotionally resonate beyond his years. And Tevez’s Raphael provides the strength as default leader to endure physical duress while never forgetting the mission. Some luck is necessary for their continued survival, but they make their own by refusing to back down from what’s right. Their courage and smiles opposite Mello’s unfazed brutality let a light in. Each one proving the capacity to instill change is within us all.

Trash is now in limited release and available on VOD.