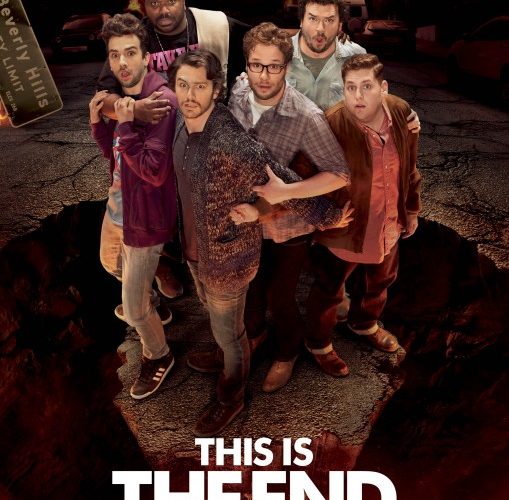 [Review] This Is The End

You’ve got to hand it to the Apatow tribe; they’ve all gotten together playing themselves in a movie about the Christian end-of-days and not a soul is spared from the fires of a self-inflicted  comedy roasting. Cries of ‘vanity project’ may apply, but the gang, which includes Seth Rogen, Jonah Hill, Jay Baruchel, Danny McBride, James Franco and Craig Robinson, are so merciless in their own lampooning that even jaded haters would have a hard time conjuring barbs as stinging as some of those launched here.

Not content to be just an hour and a half of in-jokes aimed at Evan Goldberg and Seth Rogen’s other work, This is the End makes good on its premise of a darkly-humorous celebrity apocalypse. This sometime grim, sometimes goofy miasma comes complete with horrific overtones, quasi-poignant soul searching, gleeful raunchiness and a sincere male bonding that rings truer than many of Apatow’s own films. Sure, it’s messy and scatter-shot in places, but This is the End delivers enough laughs to qualify it as this season’s most successful mainstream comedy to date.

Goldberg and Rogen, who have extrapolated the concept from the short Jay and Seth vs. The Apocalypse, leap right in with an unforced sense of camaraderie that relaxes expectations of overt self-awareness. Rogen is picking up Jay Baruchel at the airport in the opening scene, and while we hear people in the crowd calling them by name what registers is the sense of them both as friends, who in the movie’s universe have grown apart due to distance and new social circles. Jay misses his buddy and the good ol’ days but for Rogen he characterizes that oddball world of Canadian comedy the latter migrated from, while Rogen’s own status amongst his L.A. friends–Hill, Franco, Robinson—is off-putting and fraying to Baruchel’s perception of their friendship. When all of them end up at a big party thrown at Franco’s absurdly decorated mansion (furnished with an enormous, art-deco penis) the whole group find themselves trapped during an apocalyptic event that sees half the population beamed up to heaven, while several very recognizable faces are sucked into a sinkhole that opens on the brimstone of perdition.

There’s a shocking sense of fun to the cameos here, and even if we are expecting to see Michael Cera and Emma Watson, there’s a go-for-broke energy to their skewered public images that will charm even the skeptical. Baruchel, who wanders around hilariously gripping a King James bible, is the first to key into what’s happening; those blue beams jetting people into the sky are part of The Rapture, and those infernal demons clambering over the burned-out husk of Hell-A are emissaries of Lucifer himself. It’s refreshing really that the writers avoid jokes at the expense of Christianity, but this doesn’t mean Goldberg and company won’t stoop to opening a scene with the title card ‘The Exorcism of [insert extremely accommodating actor here].’ What works in the film’s favor is how Goldberg and Rogen handle their end-of-days mythology; the scenario itself is played almost as seriously as if this were an actual horror film, sci-fi picture or –gasp!—faith-based thriller. That’s not to suggest that the movie is in anyway reverent or respectful — that’s a big no — but the script provides consequences and stakes when the forces of darkness encroach, with Rogen, Baruchel and Robinson wondering what sorry state their souls must be in to have been left behind with the likes of McBride’s rabid asshole. There are even some juicy opportunities to  riff on horror classics like Rosemary’s Baby and The Exorcist, a late-in-the game sequence existing somewhere between The Warriors, The Road and that cheesy eighties cartoon The Inhumanoids. As the frat pack try and find loopholes for why they haven’t migrated to fairer climes—the Hollywood Hills are literally on fire–  Michael Amasio’s demonic creations start infringing on the boys’ attempt to wait out Armageddon. These beasts are cleverly constructed to reflect medieval hell-fire hysteria and monstrous, B-movie parentage, with a few maturity-deficient touches that play like a graffiti artist defacing a Heironymus Bosch.

The films’ direction is a bit more haphazard than its production design, and often things spiral out into a predictably hot mess with the actors riffing in some contained improv while the pacing is stretched by jokes that often carry on so long they infringe upon the set pieces. Still, this is unlikely to be much of a problem for fans of these guys or for those who enjoy a black comedy with some real bite. What works best, of course, are Rogen and the rest of the gang sending themselves up while trying to make some sort of meaningful sense out of this previous decade of their lives. There’s something close to real heartfelt affection for these friends who have to deal with the ways in which they have drifted apart, all of them having undeniable fun with their perceived foibles and how those foibles contribute to this group as its own living thing. That previously mentioned self awareness is, of course, still here in spades; references are made to Your Highness, how bad Seth was in The Green Hornet, and Danny McBride is painted as a socially deformed beast that would literally eat his East Bound and Down character for breakfast. Not all of the touches are as self-serving or obvious though, and whenever Goldberg and Rogen twist the playbook, they get something interesting for their efforts. Robinson has always played a lovable rascal, and he takes that big, amiable lug and sets him on a consistently funny pilgrim’s progress that eventually has him whooping it up with a massive, winged hell spawn. Jonah Hill’s character gets much mileage from the Oscar-nominated actor’s emotionally ambiguous façade; is he a really pleasant guy, or a secret hater that wants to drown everyone with his own faux magnanimity? There’s very little that Franco seems unwilling to try, and his character goes some of the most bizarre places, including a strange production of Pineapple Express 2 that becomes the movie’s most meta moment.

‘Human sacrifice, cats and dogs living together…mass hysteria! ’ That’s the way the looming doomsday was described in Ivan Reitman’s Ghostbusters, and certainly the makers of This is the End have taken that sense of nutty madness to heart, bringing eschatological nightmares to life with a prankster’s diligence. When compared to the self-effacing and boundless imagination of Reitman and his cast, This is the End feels like a minor bit of multiplex mayhem, but don’t let that get you down. How many comedies—including most of what Reitman did after—ever come close to even evoking that Aykroyd, Murray, Ramis classic? That one can even favorably mention This is the End in the same breath is a testament to how much Rogen and Goldberg get right.

This is the End opens in wide release on Wednesday, June 12th.