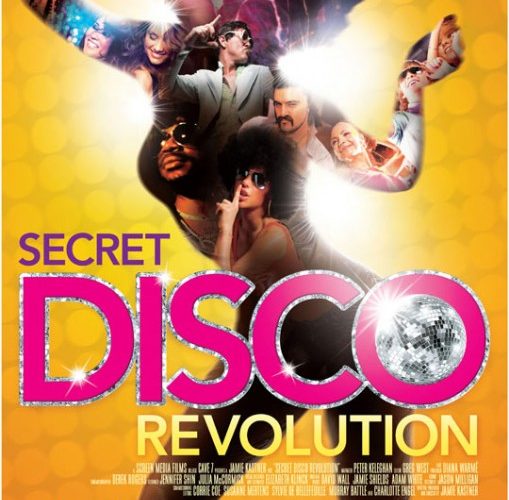 More snarky than academic, Jamie Kastner’s Secret Disco Revolution begins with the thesis that disco was an underground movement orchestrated by the shadowy powers that be to liberate blacks, gays and women. Inspired by Alice Echols’ Hot Stuff: Disco and the Remaking of American Culture, Kastner attempts to unpack the mysteries of the movement via a lively soundtrack and interviews with those on the front lines including cultural critics like Echols and Michael Musto, performers (including The Village People, Evelyn King, and Maxine Nightingale), and those working at disco’s most iconic palace Studio 54. Studio 54, a curiated, anything goes party, akin to roman orgies signaled the end — a club where a husband may abandon his wife who wasn’t hip enough for entry: disco is presented ironically as a liberation movement with restricts.

Kastner has fun with the costumes, rituals and the movement, chronicling the movement from inception to the point where it ultimately jumps the shark (including the Cookie Monster channeling John Travolta’s iconic performance in Saturday Night Fever). It successfully achieved, or at least advanced the mainstream sexual liberation for women (including music exploring previous off limits topics like orgasms), gays (both Diana Ross’ “I’m Coming Out” to the cruising anthem “YMCA” by the Village People), and blacks (“Le Freak” by Chic we learn is a protest song delivered in a perfect package). The Village People especially have a very funny thread as they debate (through the magic of editing) the creation of a song like “YMCA” and “In The Navy” with their producer Henri Belolo. In no uncertain terms they say Belolo and his writing partner were unable to craft a single entendre let alone a double entendre. The Village People, modest icons of the disco and gay liberation movements treat their contributions to society as less impressive than Kastner paints them: artists are rarely academic about their contributions to society, that’s for sociologists like Echols to unpack.

The film’s strongest moments are in its case for what brought down disco including its broad expansion via radio. The theory is, disco requires performance: it’s meant to be played in a club or danced to. As rock stations changed formats disco failed to find support amongst disk jockeys would just didn’t get it. The movement had its time and its place, advancing the liberation of gays, blacks and women via quasi-mainstream domination (the point is made “YMCA” and “It’s Raining Men” are played at pretty much every wedding). I suppose, like Bernie in Whit Stillman’s The Last Days of Disco, you could blame those yuppies in the advertising for killing urban disco – there’s an element you don’t want in the club.

The film’s tone works, it’s lively although at times it veers into the kind of territory a VH1 Behind the Music documentary may travel. The academic theories are very interesting but at times Kastner side steps some truly interesting material instead focusing on great performances. The music, as you might imagine is excellent – the revolution is never dull but at times you feel it may be scratching the surface, which leads me to believe I should read Echols’ Hot Stuff. The Secret Disco Revolution answers a few questions and provides an apt, if slightly lighthearted commentary on an important cultural movement – including a spirited defense one of cinema’s miracles, Saturday Night Fever.

The Secret Disco Revolution is currently on VOD and will be released in select theaters on June 28th.