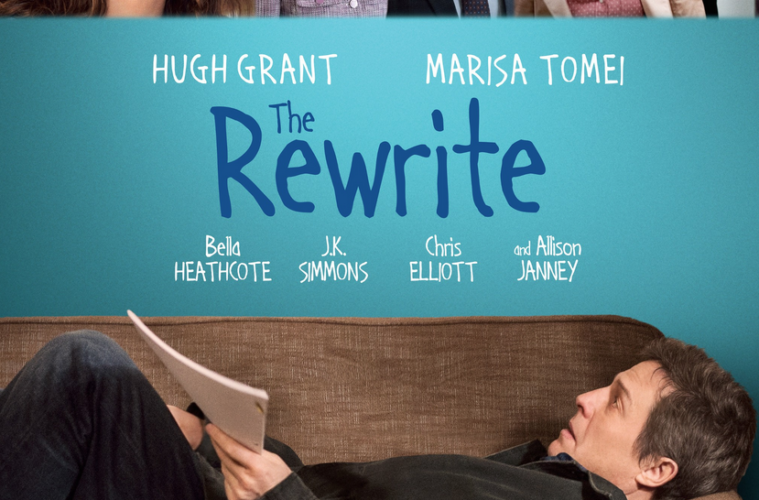 In the breezy rom-com The Rewrite, Hugh Grant plays Keith Michaels, an Oscar-winning screenwriter who’s rundown and washed-up enough to take a teaching job in upstate New York, much to his dismay. A bit of a fish out of water, the sub-genre’s perennial first son spends 90 light minutes learning the same kind of things his characters have learned since the early 90s: though he’s a bit of a cad not without his charms, our hero soon realizes this high-concept conflict is just what he needs to start his life over again.

The setting is Binghamton University, presented here as a dreary, dull but impressive New York public college that Michaels has trouble taking seriously (at first, of course). In fact, his first move after moving to the small college town is to sleep with Karen (Bella Heathcote) one of his young students, an act that will haunt him for the rest of the film. Marisa Tomei shows up as Holly, a later-in-life student who talks her way into his class as well. She serves as the one-note voice of reason throughout, essentially waiting for Keith to grow up so the two can fall in love. Tomei, a real-life Oscar winner, certainly deserves better than a role like this but elevates the material. The Rewrite is written and directed by Marc Lawrence, who actually graduated from Binghamton University in 1981. The film is a clear ode to his alma mater, featuring more than a few scenes that accent certain eccentricities of the area. It’s a nice touch that works to accent the world Keith has entered as compared to the “Hollywood” he’s escaped.

At 54 years of age, Grant’s been around for 30 years and never really blossomed into a great actor, though he’s teased at it here (About a Boy) and there (Cloud Atlas). Still, the man can carry a movie like this better than most, especially with a pro like Tomei by his side. Even as things get more and more convoluted in a very sweet third act, the cast proves well worth the time. J.K. Simmons, Chris Elliott, and Allison Janney put in solid work as Binghamton colleagues, doing a lot with a little.

A few years ago, this film would have gotten a wide release and would have most likely been a hit. In fact, this film did come out eight years ago and was a hit. It was called Music and Lyrics, directed by Lawrence and starring Grant. Thirteen years ago this film was an even bigger hit, called Two Weeks Notice, directed by Lawrence and starring Grant. Six years ago, it was called Did You Hear About The Morgans? and it didn’t do very well. Now, it’s barely getting released. And it’s a bit of a shame, because this is Hugh Grant’s most enjoyable film in some time.

The Rewrite opens on VOD and in theaters on February 13th.