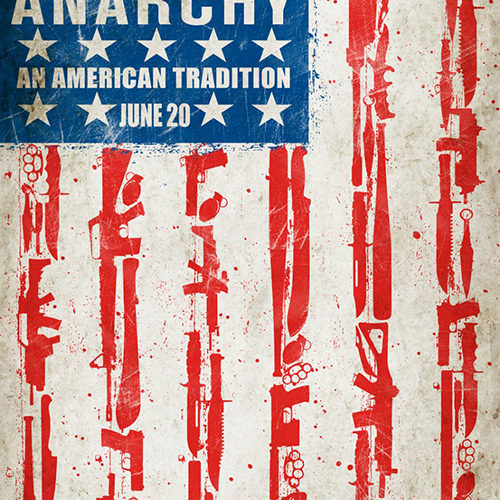 I mostly enjoyed last year’s suspense horror The Purge, despite high expectations for the premise actually going where it needed to prove more than another generic home invasion flick. Writer/director James DeMonaco gave us the graphic brutality its conceit promised through its claustrophobically bottled skirmish between malicious debutantes and an (not so) innocent family trying to survive while also lending the social commentary at its back a voice. I use the parentheses because it just so happened that the Sandin’s patriarch was implicitly involved in the titular cleansing, making money off of the fear so many “true” innocents felt. To survive the government mandated 12-hour carte blanche crime spree you need protection and luck. DeMonaco showed that impenetrable bunkers can’t always save their inhabitants; his sequel presents how it’s even worse for those with nowhere to go. For The Purge: Anarchy to deliver on its predecessor’s success, its creator knew he had to do one thing: throw in the kitchen sink. Since we only received brief glimpses of the havoc wreaked on the streets through media coverage and aural assaults off-screen, DeMonaco does what any screenwriter should given the chance to expand a world he created. Rather than stick with the same periphery tale and grow stale as a result, he digs deeper into the mythology presented about the New Founding Fathers of America who enacted this carnal law that on paper allows our nation the unfettered opportunity to let off steam. He gives a face to the moral questions posed in The Purge by specifically revolving his new plot around today’s growing wealth disparity just as underground leaders amidst those victimized rise to fight back.

It’s a big task that demands a larger cast of characters to truly invest. We related to the Sandin family because we saw ourselves in them: regular middle-class folk who know their place, spend enough for protection, and remain indoors to increase the odds of seeing the sun rise again. But what happens if we didn’t make it home before the siren blared? What if security measures that have worked for years can no longer stop violent intruders roaming as closely to us as next door? And if tragedy befell us in the interim, wouldn’t we have to at least consider suiting up and going out to achieve revenge? Well, those questions and more are answered as DeMonaco takes us into the streets to understand how inhumane this law—enforced to protect humanity—really is. When such a sprawling cast inherently necessitates a manufactured trajectory of fate to push everyone together for greater impact, you can forgive most contrivances thanks to the full-throttle action and continuously changing locales. There’s also the keenly insightful satire of our own reality’s growing unrest between classes to sink our teeth into rather than get caught up in calculating the odds that our principal players would show up on the same corner at the perfect moment for compassionate clarity. Ultimately the film is less about young couple Shane (Zach Gilford) and Liz (Kiele Sanchez) escaping their masked assailants, Eva (Carmen Ejogo) and daughter Cali (Zoë Soul) running from a well-organized army of purgers, or the blood-lusting vigilante (Frank Grillo) who helps them and more about the politics behind their circumstances.

That’s not an easy dynamic to uphold in a Hollywood-produced horror film where box office returns generally come from giving audiences mindless killing to jump or laugh at. But DeMonaco seems to have a good grasp on playing both sides—infusing the gore and gratuity of lawlessness to placate those who’d rather not think at the movies while also providing us who do some philosophical questions to break down and talk about. That’s what makes good horror, though. These films are supposed to speak about the world in which we live, to show what our future holds if we continue down a path of government interference and a plummeting dollar. Watch July 14th’s episode of Last Week Tonight with John Oliver and tell me you can’t envision our own Purge is a mere decade or two away. Beyond the commentary, though, you have to give the filmmakers credit for also delivering an exhilarating cat and mouse chase. There is genuine dread befalling every scene when Keith Stanfield‘s ghoul-faced predator arrives with his cronies to take stray civilians caught alone on the pavement. There is a strange delight in watching Jack Conley‘s mysterious “Big Daddy” standing inside his semi’s cargo container with armor-piercing rounds, mowing down anyone who crosses his path. And on the opposite coin is the palpable fear dripping from Eva, Shane, and Liz’s eyes; the fire in Cali’s as she becomes increasing more vocal and militant thanks to the viral call-to-arms of Founding Fathers hater Carmelo (Michael K. Williams); and the pain in Grillo’s as he reconciles his desire to save lives on his way to take one.

Grillo becomes the heart and soul because of his antihero struggle as a good man with a dark side. It’s convenient that he crosses paths with the others and that he’s ex-military with Jack Bauer moves to confidently walk into a room populated by multiple armed guards and prove victorious, but if not for his protection we’d never experience the intriguing details DeMonaco has added to give his America depth. Despite the genius of the business district being a ghost town, the wealthy’s auctioned-off killing grounds to mow down the poor, or the Purge’s own evolution to now possess armored invasion parties targeting specific communities to pick off like fish in a barrel, the real takeaway is how humanity is slowly creeping back in. Revolution has officially begun and I’m up for one more sequel to bring it to fruition.