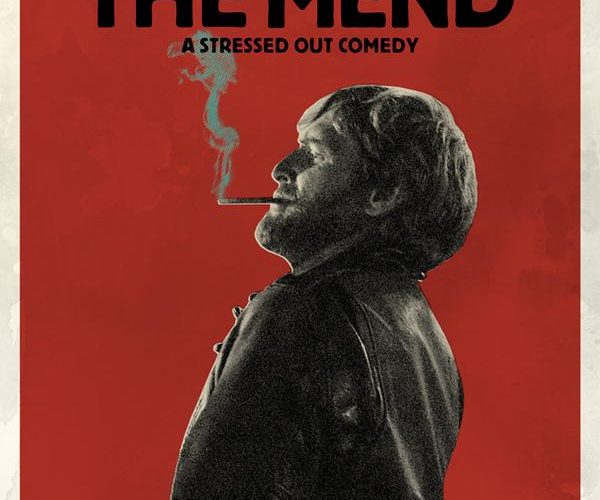 While watching The Mend, the debut feature from writer-director John Magary, I was often reminded of a favorite point from Roger Ebert’s review of Pulp Fiction. Here’s that line, published on October 14, 1994: “The screenplay, by Tarantino and Roger Avary, is so well-written in a scruffy, fanzine way that you want to rub noses in it – the noses of those zombie writers who take ‘screenwriting’ classes that teach them the formulas for ‘hit films.’” On its surface, this new feature has many marks of a final project in just such a class, from its basic premise — he isn’t just your main character; he’s also a prick! — to the handsome lead star to the New York City setting, all the way down to its premiere at South By Southwest, a festival that’s cultivated a certain audience by selling titles with that same misanthropic “edge.”

Against all odds, The Mend is not that sort of film; then again, it’s not really any sort of film. At one turn a comedy centered on two brothers, Mat (Josh Lucas, never more worn-looking) and Alan (Stephen Plunkett), and the dynamics their familiar character molds naturally create — the former’s a degenerate with glimmers of kindness and a hopeful existence; the latter’s an upper-class career man who’s seeing the most important piece of his life fall away, mostly because he’s no less an asshole than his brother, but merely a bit nicer in being so — it also earns the right to be called an existentialist drama for relying as much on, say, the moods a room’s lighting might create throughout a given day as it does the forces of language. It’s a consistently wonderful, occasionally astonishing, deservedly moving piece of film craft layered on top of a screamingly funny screenplay, one that seems to have (rightfully) been designed for the sake of fitting around the muscularity of Magary’s formal expression. (Or vice-versa, perhaps; the dichotomy’s tight enough to make that relationship ambitious.) More than that, though, The Mend is possibly the finest, most significant American film that 2015 has offered thus far, and certainly one of the year’s great pictures, full stop. This is said with full knowledge that this dedication towards these people, however accomplished in presentation, will offset some people’s appreciation. Like any great film, The Mend teaches us to watch it from the entirely unexpected opening iris onward. Over the first few minutes we see a breakdown of Mat’s latest failed relationship through three increasingly dispiriting encounters between his girlfriend, Andrea (Lucy Owen) and her son, Ronnie (Cory Nichols). It then briefly follows him through a horrifying day in New York — sleeping in a cafe, crawling over dirty floors of a Harlem subway stop, throwing a beer on a friend who’s done some undisclosed thing (do details matter?) to anger him — that leads into the apartment of a displeased couple, the male side of which we’ll off-handedly learn is his sibling.

As if this (all set to the nerve-shaking tune of LiLiPUT’s “Split”) weren’t enough, there’s essentially no respite between here and the apartment’s party of dilettantes, faux-intellectual artists, and a man who’d already be a singularly unpleasant presence if it wasn’t for his inquiry about foreign labels applied to 9/11. For as many laughs as he and the performers earn over this nearly 25-minute staging, Magary’s examination of party dynamics is founded upon a style and intelligence that’s almost anthropological: there’s an attention to the careful, conscious shifts in language that a single topic will inspire if it’s discussed between acquaintances or strangers, and these person-to-person dynamics depend entirely on whatever marks a tool — slow motion, montage, the rhythm of cutting, the volume of music — is expected to leave. Its cumulative effect is thus ultimately found in pacing and duration, and what’s most impressive about this sequence is the effect to which it doesn’t overstay a welcome.

When his brother and potential sister-in-law embark on their trip, Mat takes root in the abandoned apartment, standing front and center even as Andrea and Ronnie rejoin him. Yet his role as the central figure is somewhat short-lived: when Alan returns, romantically defeated and at wit’s end, a three-pronged dynamic begins taking root and granting privilege to other voices. Whether it’s through a simple decision to have the camera focus on Andrea and Alan’s interactions while Mat is otherwise present or, in a nice subversion of the now-common text-bubble gimmick that’s become increasingly popular, use voiceover to briefly situate us inside their heads during correspondences with loved ones, this splintering of interests — running concurrent to a retention of tone and atmosphere — is itself an act of great empathy. These are not people who’ve broken each other; instead they’re at so low a point as to make their relentless dispensing of zings — “Watch you be useful… it’s like a parody of usefulness” — a masking tool, a conduit of something that’s best understood in middle-distance gazes and what they do when no one’s around to berate.

The closest thing that The Mend has to a traditional dramatic conflict, an unceasing power outage in Alan’s apartment, would in most films find its use as a reminder that what we’re watching is indeed a character piece — that this remarked-upon, not-unnoticeable issue is bringing two bitter men and one put-upon woman closer together. If anything, the strength of Magary’s profiles and the lucidity of each performer’s interpretation render this linchpin slack. Save for feeding into a recurring joke about Mat seeking power outlets, the outage should yield some greater effect. Other than not allowing people to charge their computers (especially when cell phones seem to work fine) — and in spite of the door it opens for a great line mocking electric can openers, along with a good shock cue when electricity returns — the people are still the people, and little about my memory of why it’s all so great relates to this portion.

But The Mend‘s virtues, however intrinsic to the central flaw they may or may not be, shouldn’t be taken for granted during this time. Most impressive is that nothing previously present fades or slows down. Editor Joseph Kring‘s eye for on-a-dime cuts and grace in handling genuinely musical interludes, the kind most movies wouldn’t dare take up — not while essentially surrendering these beautiful images to the gentle, lilting classical music layered over them — tend to capture so much that they could’ve served as the only resource for this understanding. Emerging is the rare misanthrope who doesn’t grow tired and familiar the further they’re exposed to a world that angers them this deeply.

So if the final, largest lunges towards pathos are a bit pat and, with respect to the father issues at hand, even a tad rote, it’s nevertheless in service of someone who has themselves already burrowed their way into the willing viewer’s consciousness, not at all unlike the way a deer tick burrows into its host. Days later, these accumulated sounds, images, gestures, and turns of events sit, unlikely to disappear. Here’s a picture that will be discovered and talked about for years to come, eventually standing tall above the zombie products and formula-driven, ephemeral hits of today.

The Mend will enter a limited theatrical release on Friday, August 21.