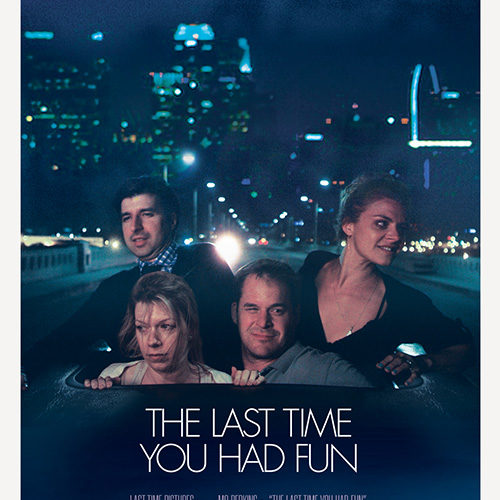 [Review] The Last Time You Had Fun

After watching the trailer and reading the synopsis, it’s hard not to see The Last Time You Had Fun in a sort of “been there, done that” light. We’ve seen it before countless times—that meet-cute of thirty-somethings at known and unknown crossroads in their lives letting loose and facing the consequences. The fact that Hal Haberman‘s script goes to generically broad places as far as why each of his foursome is caught in the doldrums that they are should make you feel as though there’s nothing worthwhile that hasn’t already been said, yet he finds a way to get at certain universal truths you can’t help but understand. Possessing a talented, naturalistic cast of familiar faces only enhances this authenticity because none overplay their roles. They are very familiar and the decisions they make are exactly like yours. Equally depressing in the reality of where all are left by the end of this impromptu night on the town as it is empowering to know none of us are alone in our troubles/worries/inadequacies, director Mo Perkins allows Haberman’s story to unfold at a smooth pace of sarcasm and measured escape. There is always an air of sex floating above each scene and interaction, but this isn’t a CW show where the anticipation of that inevitability is desired. Besides some conveniently placed revelations and an out-of-nowhere set-piece of debauchery that somehow evolves into a thoughtful discussion about identity from a place of surprising heart underneath the over-the-top comedy a guy like Jimmi Simpson brings to the table, we believe that this night is genuinely about alcohol-induced catharsis devoid of simplistic cliché.

That’s not saying everyone remains chaste by the credits, but the result is an honest one regardless. The filmmakers aren’t after salaciousness because the premise is built around the concept that this quartet is far-removed from the sexual exploits of youth. They’ve all been married, two have children, and a third is expecting—this is why they meet at a low-key wine bar rather than the strip club teased at the start. Half would like to be in bed by ten o’clock, but the similarities shared and easygoing nature of candid conversation injects the kind of momentum to push them past routine and into a realm of excitement. After a couple drinks they realize it’s exactly what they need. Anything more would be a mistake, but one that allows an irrevocable change they’re too afraid to make. The premise is as follows: Clark (Kyle Bornheimer), a father-of-two, just finalized his divorce. Former Best Man Will (Demetri Martin) arrives at his home with a limo and plans for drunken chaos in the aftermath. Wearing sweatpants and not in the mood for gyrating women taking off their clothes or a loud bar littered with kids much younger than him, Clark calls an audible towards quiet and a bottle of red. While there they meet sisters Alison (Mary Elizabeth Ellis) and Ida (Eliza Coupe), a mother with a husband who can’t be bothered and a former party girl who’s separated from her beau because he cheated on her respectively. The four are thrust together thanks to barbed preconceptions leading to potentially harmless friendship and the discovery of their bizarre symmetry cannot be denied. So off they go.

In the pursuit for marijuana and the sense of comfortable joy only narcotics can provide in lieu of the depressing weight of life crushing their every thought, loose lips eventually share embarrassing facts until they’re all on even footing for the adventure. Things go awry with the aforementioned journey into the bowels of Jimmi Simpson’s “cool” (his Jake is Ida’s hubby), but the harsh realities and serious tones taken as a result only add to their characters’ resonance. Masks start to come down, easy assumptions are thrown away, and the hidden thoughts and desires of each slowly bubble to the surface. Stereotype runs rampant, but never in a way that takes you out of the film because none are used solely for jest. Jokes do arrive, but so too does that yearning to break free of convenience. There are a few nice comedic interjections thanks to a wonderfully dry Charlyne Yi as the limo driver, hilarious straight man antics from Todd Berger, and Simpson’s ability to toe the line between disgust and idolism. They are included as ways to bring the four leads closer to each other, digging deeper due to a mutual appreciation for missteps and over-reactions. While the humor is infectious and a huge part of the film’s success, however, it arrives as a result of dialogue and real performances rather than blatant attempts for laughter that have nothing to do with the plot. Perkins and Haberman are keenly aware that what they have is a funny situation experienced by charmingly witty people willing to go outside their comfort zone. They don’t have to try for the comedy since it’s inherently present.

Because of this, both can spend more time on character and story. They can bring out the relatable relationship drama and push their creations into corners to learn something new about themselves. This is key: while Alison opens her eyes to the fact Ida’s idle threats aren’t so idle, she also sees that what Ida says with rolled eyes about her own life might be true. The same goes with Will and Clark realizing they’re current existences don’t fit who they are anymore. It’s through watching their mirrored selves—boys opposite girls—that they acknowledge personal faults. Bornheimer and Coupe standout because they’re the more pronounced pair, but Martin and Ellis do the heavy lifting to make it all worthwhile. Where they end up might not surprise, but it might be exactly where they’ve needed to go.