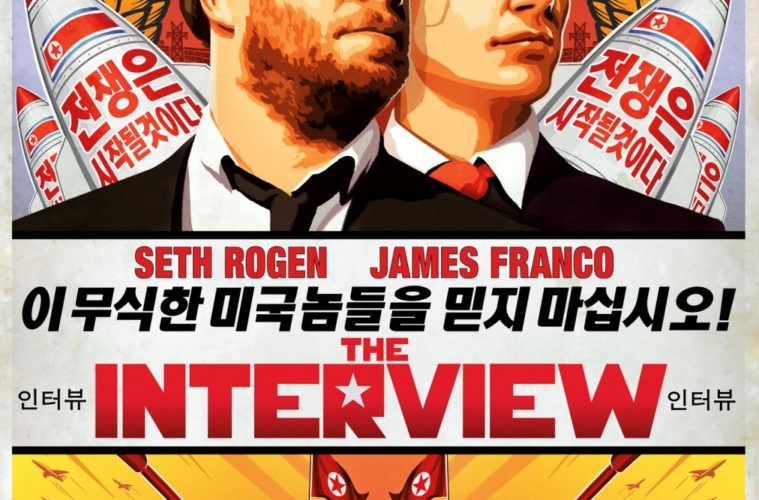 Who would’ve thought a movie complete with Katy Perry and fecal jokes could cause so much brouhaha? The Interview did just that by royally pissing off North Korea. The story surrounding Seth Rogen and Evan Goldberg‘s film almost makes this high-concept comedy funnier, but it’s already got enough laughs, so it doesn’t need any help from North Korea’s unfortunate threats or cyber attacks. Following the duo’s successful directorial debut, This is the End, they’ve delivered a superior sophomore effort with this rousing bro comedy.

The two buddies at the forefront of the film are Dave Skylark (James Franco), a famous celebrity-focused entertainment journalist, and his producer Aaron Rapoport (Seth Rogen). After 1,000 episodes and 10 years of working with his best friend, Rapoport has grown tired and embarrassed of the kind of content they’re putting out in the world. “Skylark Tonight” is the kind of show that features Joseph Gordon-Levitt playing with puppies, which, for some reason, isn’t good enough for Rapoport.

In fear of losing his producer and friend, Skylark comes up with a good idea: land an interview with Kim Jong-un (Randall Park). The dictator is a big fan of “Skylark Tonight,” so they decide to give it a shot. Lo and behold, the North Korean leader agrees to do a one-hour interview on live television. After this news break, the CIA sends Agent Lacey (Lizzy Caplan) to convince the two to “take out” Kim Jong-un. Perhaps a little too quickly and unconvincingly, they agree to go along with the plan. The problem is, Skylark isn’t exactly the sharpest tool in the shed, and his loyalty to America is tested when his bond with Kim Jong-un tightens. Anyone hoping for some deep commentary from this set-up needs to look elsewhere, because this certainly isn’t that movie, nor does it ever try to be. It’s purely an R-rated buddy comedy that does exactly what it sets out to do, and exceedingly well. Packed with great set-ups and payoffs, screenwriter Dan Sterling‘s finest jokes will always see some kind of continuation, making the laughs progressively grow. The Interview doesn’t lose steam over its 112-minute running time, which can’t be said for most comedies over 90 minutes. Even Rogen and Goldberg’s previous film This is the End, by the third act, couldn’t sustain its slightly shorter runtime.

Avoiding plenty of potential pitfalls, when the film becomes more action-heavy towards the end, it’s never at a loss for laughs, in part thanks to some wonderfully executed, unexpected brutality. Set in North Korea, one can predict there’s going to be some bloodshed, but Rogen and Goldberg should seriously consider directing a full on action-comedy one day — they know how to milk fights and gunshots for laughs, effectively balancing varying tones. The action, especially when a tank and helicopter face-off, is also far more polished than most action-comedies we see these days. The film also doesn’t waver when Rapoport and Skylark are apart from one another. Rogen and Franco are, unsurprisingly, terrific together. The co-director is one of the few actors around capable of making the straight man role as fun as the oddball, who, in this case, is Franco. Not a single joke that comes out of Franco’s mouth falls flat. Even if a joke goes on for too long — “hate us because they anus” — he makes it work with plenty of goofy charm. Not only on display with Rogen, Franco’s chemistry with Randall Park is also a highlight. By this point, Rogen and Goldberg are old hands at making buddy pictures, which is essentially what the majority of their films — on a producing, directors, and acting side — boil down to. From the very start, Rapoport and Skylark are convincing best friends. They’re lovable, even while making plenty of dumb decisions. Skylark is like a little kid in need of constant supervision, and it’s hilariously endearing.

A few jokes may go on too long, and it’s a shame Lizzy Caplan doesn’t have a lot to do, but the slightly overlong riffing hardly halts the narrative. Rogen and Goldberg’s sophomore effort is briskly paced, efficiently structured, gleefully violent, and contains plenty of substantial laughs and clever touches. It’s a simultaneously dark and sweet comedy, and never is the movie at odds with itself. From start to finish, The Interview is simply a joy to watch.

The Interview is now in limited release and available on VOD.