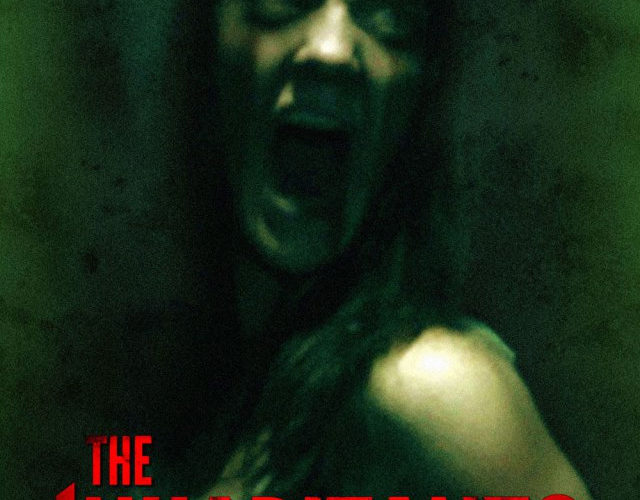 When you’re setting your New England ghost story against the backdrop of a Salem Witch Trial past, it’s quite the coup to secure a locale as famous as the Noyes-Parris House built in 1669. Now owned by author Glenn Cooper (who serves as executive producer), its historical resonance as the home of Reverend Samuel Parris is felt. It was his daughter Betty and niece Abigail Williams who made the first accusations to begin the tragic true-life events that unfolded. It should be no surprise then that Michael and Shawn Rasmussen would decide to let the spectral ghouls of their film The Inhabitants be children led by the spirit of a woman hung for witchcraft (India Pearl‘s Lydia) after a flu epidemic hit the community’s youth centuries earlier. The Noyes-Parris House is transformed into the fictional March Carriage House—a quaint little bed and breakfast with a well-documented and haunted past. Current owner Rose (Judith Chaffee) is too old to continue on as caretaker now that her husband Norman has passed, so her niece puts it on the market. Jessica (Elise Couture) and Dan’s (Michael Reed) young couple enters, believing it the perfect semi-fixer upper to settle down in while fulfilling the former’s dream of running a B&B. They are enthusiastic, driven, and ready to make it their own until certain revelations plant seeds of doubt. First it’s Jess and her inability to shake Rose’s prophetic parting words: “Take care of the children.” Then, once she’s inexplicably rendered cold and distant, Dan seeks to discover why.

Shot on a shoestring budget with a handful of friends, The Inhabitants‘ journey was obviously an arduous labor of love. The financial constraints (their post-production Indiegogo campaign sadly failed) can be seen via some melodramatic acting and the too crisp text of supposedly vintage library books illuminated to highlight their content and unfortunately their lack of aging too. That’s about it, though, thanks to a carefully measured mood and pacing utilizing their authentic on-location set to full effect. It’s like the house was built especially for this story with creepy crawl spaces throughout the walls, an expansive attic for a secretive VHS surveillance set-up, and thick forest seclusion. Night allows the pitch-black sky to permeate the structure, shrouding the figures roaming about in search of blood within.

It’s a step up from the Rasmussens’ John Carpenter collaboration The Ward because it isn’t afraid to let its mysteries exist without easy answers. There’s no attempt for twists, just a barebones, atmospherically tense ghost thriller moving at its own pace. It never feels slow either—the filmmakers were able to distill their progression of malice into effective bursts proving as necessary to Jess and Dan’s trajectory as the one before. Where many horror films of this ilk fail is their desire to repeat one scare over and over, forgetting they’re bludgeoning us in the process. Things here escalate—even if slightly—as each day passes. Unwelcome guests innocently hovering are replaced by purposefully inviting doors creaking open. The spirits change from passive to possessive to unapologetically violent.

Why these beings remain in the house isn’t forced upon us either by some sage or deceptively manipulative figure welcoming them to town. It appears this might occur with the entrance of three delinquents led by Vasilios Asimakos‘ Dylan, but their inclusion is for more passive reasons. Even if we aren’t paying attention to the lore that Jess learns from her books, the movie still succeeds in its scares. The origins of the surveillance system are similar. Did Norman install it so he could lecherously voyeur on the young women undressing in supposed privacy or to capture the ghouls threatening to devour them? This ultimately proves inconsequential. We merely need its presence to provide Dan a way to look at his wife’s gradual devolution from afar. The whole is claustrophobic as a result with scares shot from in close, barely discernable from the darkness, and its few kills quick and minimal. The Rasmussens aren’t looking to disgust with gore. They’re after a subtler terror by transposing faces together (Jess and Lydia becoming one) and supplying intense visual stimuli of bone, metal, and dead eyes screaming. Its lore is steeped in witchcraft with mention of the “witch’s teat” taken as literal as possible with the children’s spirits (which we nicely only see a handful of times) beholden to their master for sustenance. If they need to kill anyone, it is for survival. There’s purpose to every action rather than some petty desire to drive away newcomers. Lydia instead steals physical form to invite them in.

There are a few minor quibbles like the extensive use of transitional fades to and from black rapidly chopping up time and a bit too winking of an epilogue, but for the most part The Inhabitants delivers on its promise for supernatural suspense. Couture and Reed play their roles well especially when the stress of the unknown weighs down upon them. Their relationship is overly joyous at the start—cartoonish in some respects but also a necessity to prove to the audience how different there interactions become once Jess finds the source of the house’s evil. This is but one more example of how things that seem superfluous eventually prove integral to the plotting, story, and character development. The surprising lack of excess is refreshing.