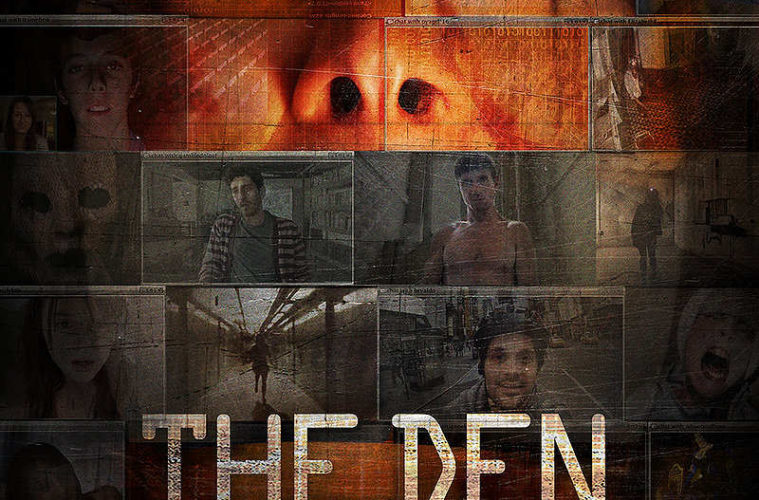 To keep things interesting, the trend has, over time, implemented a wider array of lenses. Anthologies like V/H/S and its sequel play with a variety of phone cameras, hidden spy cams, GoPros and, in one instance, a surgically implanted eyeball cam to demonstrate the versatility and ubiquitous nature of the equipment. The most relevant, however, is the web cam, which reflects society’s growing dependence on internet-connected devices as a means to satisfy relational and voyeuristic desires. Much of The Den was shot via this tool, but instead of feeling progressive, its lack of mobility hints at the more regressive aspects of found footage films. The feature debut from Zach Donohue, who co-wrote the script with Lauren Thompson, isn’t the first web cam-based film, but its concept makes the technology central to the plot. Its main character Elizabeth Benton (Melanie Papalia) receives a grant to study a Chat Roulette-type site called The Den. In the process of interacting with its many exhibitionist, deviant, and, in rare instances, friendly inhabitants, she witnesses what looks like the grisly murder of a young girl. She reports the incident to the police, but they dismiss it as a hoax. Convinced that what she saw was real, Elizabeth begins an investigation of her own, but as she delves deeper into the case, she and her loved ones, including her boyfriend (David Schlachtenhaufen) and pregnant sister (Anna Margaret Hollyman), become the targets of a sadistic group of murderers with superior hacking skills.

The setup provides plenty of room to explore the net’s numerous roles, as it’s simultaneously depicted here as a distraction, a necessary means of communication, and as a haven for rampant misogyny and sociopathic predators. The latter results in some vile, all-too familiar moments, including one where Elizabeth scrolls through a number of racist and sexist comments beneath a photo she posted of the victim. As she becomes increasingly tethered to her laptop, the film also mirrors the way our screen-focused culture views the world. Throughout the film, a constant barrage of instant messages, email notifications, and chat windows vie for her attention, and present avenues through which the oft unseen villains are able to infiltrate her life. What begins as a potentially rich commentary on the dangers of living online soon wanders into some frustrating territory when the film struggles with its found footage aesthetic. As the anonymous baddies slowly destroy Elizabeth’s life – first by sabotaging her work, then by terrorizing or killing those closest to her – fear gives way to confusion over how or why certain situations are being shot. While much of the action takes place in front of the web cam, camera phones and surveillance footage emerge to move the story beyond the computer desk, but their presence only adds more questions. By the second act, total immersion seems impossible as The Den demands belief in a world where people are either unwilling or unable to shut their laptops, or visit a friend without documenting the trip. The rising body count, sloppy killings, and unoriginal plot twist (think Hostel streaming service) also made me wonder just how the culprits were able to evade the law, an issue the film conveniently sidesteps by portraying its police force as completely incompetent and ineffective.

While The Den strives to present a cautionary internet tale, it’s the web camera that ultimately defines its meaning. The static, single view lends a snuff-like, exploitative quality that may have worked if it didn’t aggressively wink at and, therefore, weaken the surprise conclusion. It also exists to mirror and implicate the viewer as an inactive, morally questionable participant who can’t resist a peek at all the human suffering. However, the catch is that we can look away, because the film is neither compelling or innovative enough to justify sitting through its torture porn-y moments. Funnily enough, this reaction is echoed perfectly during one scene when, after clicking through a few of the titular site’s unsavory users, Elizabeth’s friend exclaims, “These people are terrible! Can we just watch the cute cat videos?” Amen, sister.

The Den hits VOD and theaters on Friday, March 14th.