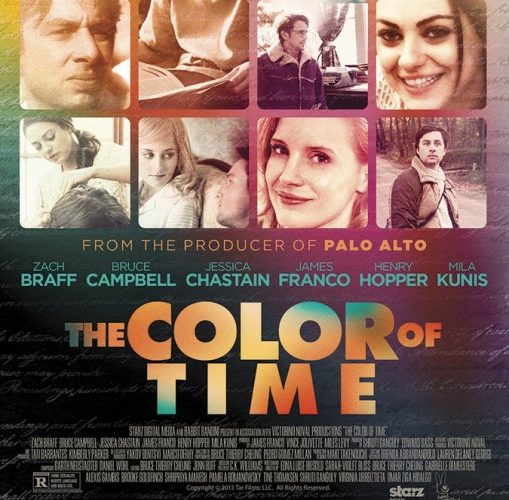 [Review] The Color of Time

I wonder if James Franco showed his NYU class Terrence Malick’s The Tree of Life because it appears the twelve students he handpicked to write and direct what became the C.K. Williams biography The Color of Time saw it and sought to remake it. Instead of musings on the world with one boy/man serving as a metaphor for the whole of existence, however, they’ve centered their love for elegiac interludes of the mundane on a series of poems serving as a metaphor for one single man in autobiographical fabrication. They bring physical life to Williams’ words as they emanate from his celebrity vessel (Franco himself) against 73 minutes of laborious pacing, beautifully shot, yet empty second unit sequences, and visual collages depicting his stanzas’ literal meaning that only serve to confuse and blur the line between fact and fiction. The idea of students collaborating with a stable of famous actors (most of whom were on break from filming Oz The Great and Powerful together) is a wonderful story in itself, but to then treat the culmination of the exercise as more than a student thesis film does it a disservice. I wouldn’t be surprised to hear that their work is a fitting companion to the poetry itself—a successful adaptation to be seen after one has read, dissected, and learned to love the source material. For someone going in blind, however, its slow journey through time made me alternately dizzy and bored.

Lets look at an instance towards the end (spoilers) where the words spoken by Franco—his Williams is conducting a public reading which the filmmakers are then projecting memories upon—concern the need to say goodbye to an old friend. Enter Zach Braff as Albert, a new character to the mix—and the only male figure seen as an equal to C.K. after a steady stream of feminine muses along the way—who has a mean cough for us to of course believe it’s he who dies from some terminal illness all involved already know about. Lo and behold, however, Albert’s final phlegm-throwing fit ends with him stating how he must have ate something that didn’t agree with his stomach. Cut to a few minutes later and we watch the tearful death of Williams’ beloved horse. Was this an intentional bit of misdirection? If so why such effort for a five to ten minute sequence? Add the whole poetry angle and I start to wonder if I saw Albert’s death through the horse in some grand personification trick of emotional grief my literal mind can’t wrap itself around. It’s either this or these NYU students read the poem of a horse dying as a metaphor for his friend and then somehow botched the translation by showing us the horse instead of Albert. I’m just rambling at this point, but the fact this tiny bit of film has me so confounded and frustrated proves how troubling the whole turns out. A poem about death and future generations hubristically playing God meets the same fate as we’re shown Three-Mile Island footage rather than interpretations of their import.

There are also a ton of tonal disparities that may be the result of so many inexperienced cooks in the kitchen. For the poem “Mother’s Lips,” the proceedings are tinged in an almost sensual light. Mom (Jessica Chastain) is glowing in the oversaturated light caused by the old-timey aesthetic utilized throughout (not just in flashbacks), smiling at her boy (7-year old C.K. as played by Zachary Unger) while romantic memories of teenage lust and adult marriage crosscut in between. I was waiting for the meaning of the poem’s title to arrive in some sort of sexual abuse only to find it spoke to the way she used to mouth the words he spoke a second after him. Here are all these representations of lost love, promiscuous escapades, and homosexual urges (maybe?) and then voila: Mom. Splicing in actual footage of Williams himself reading doesn’t help straighten things out since they augment the artifice on display elsewhere. What if anything is more than hypothetical fantasy? Possibly nothing. Facts may be present even if they aren’t obvious, (Were the scenes with Franco and Mila Kunis as his wife Catherine supposed to be in Paris? And if so was a throwaway line at a gas station attendant about him residing there supposed to prove it true?), but the constant starts and stops become so disjointed and incongruent that I ceased to care. I thought Franco, Henry Hopper portraying C.K. as a young adult, and Kunis are very good. I just wonder what it is they all add up to considering I might know less about Williams now than I did before.

If we’re judging purely on attractiveness, however, I’ll give these kids credit. I liked the hint of nostalgia seeping out of every frame and the Malick-esque moments are pretty. The problem they present is that each brief reprieve away from Franco, et al. comes as more distraction/filler than profound additions to the story. We jump to and fro so often and repetitively that it isn’t as though these moments set the scene or prepare us. We begin to expect a time change every five minutes or so very early on. The idea of it being visual poetry to accompany Williams’ text is a nice thought, but that again means The Color of Time is for enthusiasts of the poet and few others. To me its only real success is giving twelve students unforgettable experience in the field.

The Color of Time is now on VOD and hits limited theaters December 12th.