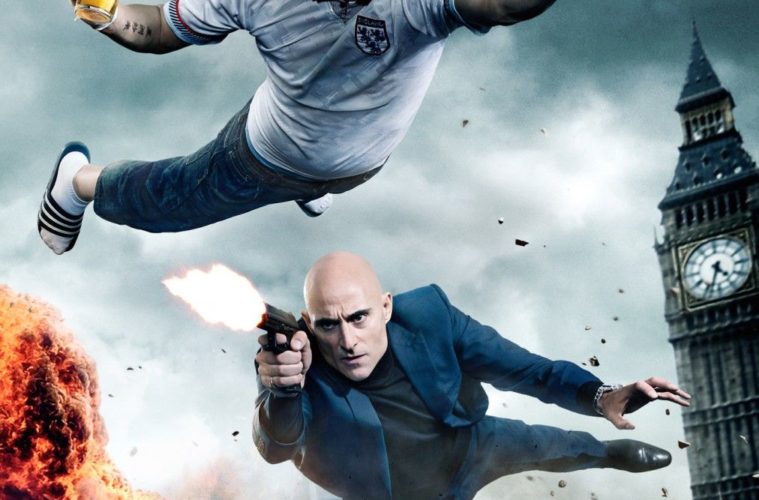 Crude, cruel, and uncalled-for in the best possible way, The Brothers Grimsby, like The Dictator, marks another evolution away from the guerilla theater that put Sacha Baron Cohen on the map as a sharp critic, provocateur, and button-pusher. His latest feature balances action and comedy, and, as one might expect, there’s a certain inherent cruelty that comes from the stunts. (One sequence involves bad gunshots leading to HIV infections.) While not everything lands — including a joke involving a certain Republican presidential front-runner — there are some gags one won’t be able to unsee for some time, making for a film that mostly delivers — even if you may not be proud of yourself for laughing.

Baron Cohen stars as Nobby Butcher, a nitwit from Grimsby in Northern England and the kind of soccer hooligan Andrea Arnold’s early work cautions against getting involved with. The father of eleven children, yet none with his current partner Dawn (Rebel Wilson), Nobby is a deadbeat who always has cash for a new tattoo and a pint.

The older brother of the long lost Sebastian (Mark Strong), Nobby has carefully preserved items from Sebastian’s childhood in hopes he’ll return to Grimsby. No such luck, and, through a tip from a local, Nobby tracks Sebastian down just as he’s about to go to work — as a top agent for MI6. Fingered for both an assassination attempt and the HIV infection of Daniel Radcliffe, Sebastian is forced to prove his innocence.

Globe-trotting wackiness ensues with appearances by Isla Fisher and Penélope Cruz and an awkward, unexpected cameo by Gabourey Sidibe. Nobby never leaves Sebastian’s side as the brothers reconnect, forcing Nobby to take on the role of protector as they recall their painful separation at a Grimsby orphanage.

Tightly compacted into a brief 83 minutes, The Brothers Grimsby never has the time to overstay its welcome; while certain gags bomb, the ones that succeed do so with big laughs and all kinds of bodily fluids. A product of their unique upbringing, Nobby’s values seem unapologetically out of lockstep with cultural norms, right down to a seduction that might even make Borat and Ali G blush.

At the helm is an unlikely choice: action director Louis Leterrier (The Transporter, The Incredible Hulk), who’s making his debut in all-out comedy. Gone are Baron Cohen’s performative-documentary antics designed to test the tolerance of those who encounter his personas in the wild. However, the tolerance level here is shifted somewhat less effectively towards a mainstream multiplex audience. It’s as if the joke is on us rather than providing us with a screening mechanism to laugh at the reactions of so-called liberals and so-called conservatives.

As far as straightforward crude comedies go, The Brothers Grimsby succeeds at times, even if the confines of narrative cinema restrict just how wild Sacha Baron Cohen can be. Perhaps there’s a limited shelf life to guerilla theater once it crosses a certain million-dollar box-office figure. It’s a shame that there are only a few places in the world where Borat, Brüno, and Ali G can go where they would not be recognized — although I’m sure North Korea and ISIL strongholds are a bridge too far, even for Baron Cohen.