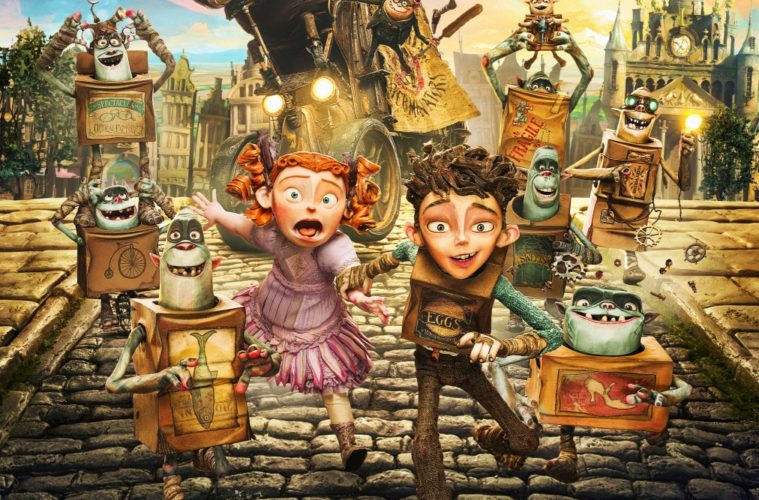 Although their features thus far come from different minds (both on the page and when it comes to the execution), the Oregon-based stop-motion studio Laika clearly has specific, shared preferences. Darker, more daring, and perhaps more meticulously crafted than the average studio animation, following Coraline and ParaNorman, their latest feature feels like a natural next step for the company.

Based on Alan Snow‘s 2005 novel Here Be Monsters, The Boxtrolls is set in the secluded town of Cheesebridge, an isolated, dairy-obsessed place occupied by the false notion that little creatures (think Minions with more personality) located in the sewers live only to terrorize the citizens. The only one that doesn’t believe this nonsense is a boy raised by the Boxtrolls themselves, Eggs, who is named after the origins of the obligatory box outfitted to his body, and voiced by Game of Thrones‘ Isaac Hempstead Wright. In order to get into the inner circle of authority in the town (aka the White Hats), the evil psychopath Archibald Snatcher (Ben Kingsley), currently a Red Hat, has been hired by mayor Lord Portley-Rind (Jared Harris) to perpetuate this myth of the nefarious Boxtrolls and wipe them out of existence. Living a life of fear, the dwindling group of creatures must survive amongst themselves in a perfectly-orchestrated community, only coming out a night to scavenge for scraps. From old record players to electrifying gadgets, these findings build out their world, a wonderfully realized environment reminiscent of Jean-Pierre Jeunet‘s work.

As one might expect from their previous work, Laika’s technical implementation is exquisite, in what is their most complex undertaking yet. How they execute an elegant ballroom dance is nearly incomprehensible with its numerous moving parts, along with thrilling chases through the Victorian-meets-steampunk setting. The most minuscule of details are rendered with idyllic artistry and rather than having a dull clean sheen, the world is explicitly tattered and downtrodden, giving a tangible reality to the larger-than-life characters.

Dealing with themes of acceptance, family, and identity (one specific aspect being much more forward-thinking than the standard family animation), The Boxtrolls is a familiar story adequately told. With influences clearly occupying the realm of Charles Dickens, one wishes a bit more inventiveness was employed to match the exemplary craft on display. A disappointingly evident arc laid out for each character from the get-go means much of the film is spent waiting on the inevitable to click into place, and despite how ravishing it is to see the events progress, the central story comes up lacking. Egg’s journey eventually ends up merging with that of Lord Portley-Rind’s daughter Winnie (Elle Fanning), but the finest supporting characters are Snatcher’s stooges, including Mr. Gristle (Tracy Morgan), and most notably, Mr. Pickles (Richard Ayoade) and Mr. Trout (Nick Frost). By far the best moments of the animation deal with their contemplative exchanges suffering an existential crisis if they are indeed on the honorable side of this story. (The directors clearly know this too, involving them in one of the best end credits sequences as of late.)

Despite how laborious the process is, The Boxtrolls is a testament that the corporeal stop-motion approach (while partial CG and hand-drawn is also employed) is one that shouldn’t be neglected in today’s world. Laika may not break any new storytelling boundaries with their latest feature, but their virtuous, universal message of fitting in regardless of circumstances and lavish, ornate design makes for an enlightening ride. Just like their peculiar title characters co-exist perfectly together, Laika’s fantastical worlds are an imperative component to the craft of animation.

The Boxtrolls opens on September 26th.