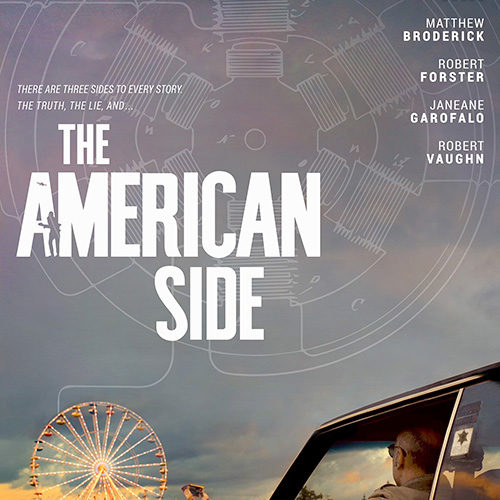 [Review] The American Side

When a film shot in Buffalo, NY co-written and starring a native of the city comes across you’re desk you look upon it with a certain level of skepticism. I’ve lived here almost my entire life and I’m still guilty of seeing my hometown as a B-level sector in comparison to New York City or Hollywood. This year has changed that thought-process for locals and the industry with two effective genre works exiting the Queen City with aspirations for the big time. Against all odds I have to admit they both deserve every accolade bestowed upon them. Horror flick Emelie came out of the gate first with success and now The American Side hits theaters with a chance at earning more. This hard-boiled noir is the real deal.

Written by lead actor Greg Stuhr and director Jenna Ricker, this adventure of a yokel private investigator is full of MacGuffins and shady characters. It centers on the long-lost notebook of Nicola Tesla being sought by luminaries in the science world, government agencies like the FBI and DARPA, and the under-appreciated inventor’s native land of Serbia, but we don’t even hear about it until a third of the way through. This isn’t a misstep — it’s actually the aspect of the film I loved the most. Charlie Paczynski (Stuhr) has never even heard of Tesla nor harbors any interest in learning. He’s merely a PI calling the law’s gray area home that uses a stripper friend (Kelsey Siepser‘s Kat) to scam his extra-marital affair clients into paying double.

Charlie is far from a hero, but he is loyal and guilty enough to realize when he screws up. This is one of those times as a rudimentary job taking photos of Tom Soberin (Harris Yulin) with Kat under the neon glow of a Ferris wheel gets abruptly ended with a gunshot. What Charlie never knew — and how could he — was that Soberin wasn’t just some old philanderer. No, he was a mechanical engineer who worked for the prestigious firm of Chase and Whitmore on a secret project with unknown implications. By searching to discover where he is in order to learn what happened to Kat, Charlie becomes embroiled in a case of international espionage boiling down to a theoretical invention with the potential to change the world.

The players are as follows: Soberin’s duplicitous lover Emily (Camilla Belle), Chase and Whitmore principals Borden Chase (Matthew Broderick) and Sterling Whitmore (Robert Forster), DARPA Agent Barry (Janeane Garofalo), Serbian spooks led by Joe Grifasi, and a young, desperate scientist on the run named Nikki Meeker (Alicja Bachleda). They’re all looking for a missing page of Tesla’s book, a priceless artifact detailing the creation of something that can either save mankind or destroy it if not both. Men in suits are employed by one if not all, one or more players is lying through his/her teeth, and Charlie is simply too stubborn and too kind-hearted to walk away despite his own shady exploits predicting he just might. The rabbit hole opens and consumes us along with him.

There’s a lot happening simultaneously so we never catch wind of what’s truly important just as characters come and go but never prove inconsequential to the whole. Charlie gleans more and more details the deeper and deeper he falls, each revelation causing him to believe one of his new acquaintances is the bad guy before the next steers him in the opposite direction. But nothing feels convoluted because he doesn’t know anyone involved in this conspiracy. He isn’t shaking down leads with folks he’s worked with or squeezed before. He’s in the dark and therefore can only act upon the information he possesses at any given time. Stuhr and Ricker make sure it’s only enough to advance the film at the pace they have purposefully set.

Don’t take that as meaning the pacing is anything less than swift and engrossing, however. Just because he hits more than a few dead-ends courtesy of everyone’s misdirection doesn’t mean we get bored. There isn’t a sense of repetition or manipulation mostly because the characters are so much fun to engage. The noir aesthetic — Charlie is called Philip Marlowe but he prefers Mike Hammer — helps in this by lending pulpiness for laughs and dramatic flair for tension. Paczynski is always ready with a dryly-delivered retort to any flack thrown his way and we’re practically introduced to his world by a client’s nebbish tears (Grant Shaud made a career at this on Murphy Brown) and an unwitting informant’s hilarious eccentricity (the great Robert Vaughn steals the show).

Belle is a perfect femme fatale with Broderick smarming things up as Forster provides cryptic, quasi-fatherly advice. They’re all friends and foes at one time or another so credit the writing for letting Charlie keep everyone at arm’s length as a rule. The only trustworthy one is Nikki because there’s no denying she’s at the center of the conspiracy and in the most danger. Bachleda plays the role nicely with a vulnerability that never belies her strength as a key figure in what’s happening. It’s an eclectic cast with many recognizable faces, but no one sticks out or goes too over-the-top to trump an already stylized tone. And as a Buffalonian I must mention the great, under-utilized Stephen McKinley Henderson in a small role. He makes everything better.

The city itself is also beautifully rendered in daylight despite being noir. Its architecture is highlighted via interiors and exteriors purposefully chosen and Silo City and Niagara Falls’ Cave of the Winds provide locales for kinetic chases with personality. Watching the same city double for so many others gets boring after a while so it’s nice to see a truly unique environment (though the constant lingering atop signs is mainly for locals’ benefit). It’s good to see a film that’s unique as well because even though the genre is tried and true, The American Side constantly remains fresh. There are just enough characters to keep you guessing and Stuhr is just surly enough to keep his Boy Scout nature at bay. His Charlie is someone I’d watch again.

The American Side opens in Buffalo, NY on Friday, April 22nd before hitting New York City on April 29th.