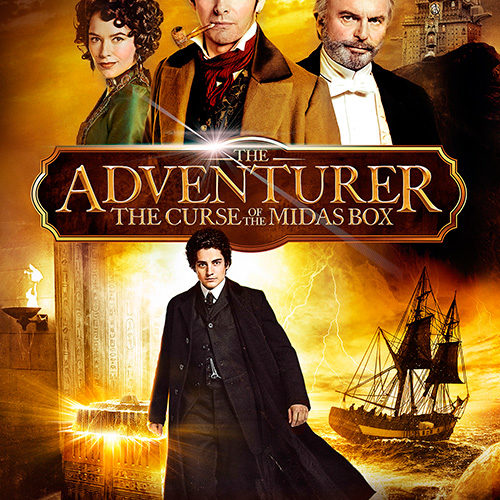 [Review] The Adventurer: The Curse of the Midas Box

There will never be a lack of literary fantasy adventures for ages 12 and up to transfer from page to screen. The question becomes whether the property is given access to a wealthy studio’s clout or one more reliant on word-of-mouth and existing fanbase to ease the transition. For Entertainment Motion Pictures, their grab at franchise caliber fiction comes courtesy of a trilogy written by British author G.P. Taylor that unfortunately secures little of those things. It appears the author’s first novel Shadowmancer is the one that serves as his claim to fame (currently being adapted into a television miniseries) and independent distributor Film Arcade can only do so much with a limited release preceded by VOD. Don’t therefore be surprised if Mariah Mundi’s cinematic introduction The Adventurer: The Curse of the Midas Box is also his last. This is the name of the game, though. You only have to ask The Golden Compass about surefire fantasy hits to understand the economic nature of the business that sadly has nothing to do with the quality of what’s actually put onscreen. In fact, screenwriters Christian Taylor and Matthew Huffman along with director Jonathan Newman do a pretty good job with the source material here, recruiting a few recognizable faces and finding themselves with a modest enough budget to render some nice special effects. The story itself doesn’t do too much to set it apart from what we’ve already seen from the genre, but that shouldn’t diminish any success it deserves on its own merits. From its Victorian England costuming to Sam Neill‘s scenery-chewing villainy, Midas Box could easily be confused for something financed by Hollywood.

Beginning with voiceover narration about the not yet understood mystery of the titular Golden Emperor’s namesake, Newman sets up his adventure by pitting the evil Otto Luger (Neill) against the heroic Captain Charity (Michael Sheen) as the former acquires a long-lost map and the latter an amulet key. Fast-forward to the British history museum run by Charles Mundi (Ioan Gruffudd) and we meet the boy at the center of this tale: Mariah (Aneurin Barnard), a teen looking after his younger brother Felix (Xavier Atkins) when stumbling upon the intriguing Will Charity in the room adjacent to where his father is giving a lecture. Quick with a jovially sarcastic wit, this strange newcomer reveals an injury and requests Mariah get his father before passing out. The boy’s curiosity is piqued, readying him for what transpires after men invade his home later that night. We soon discover Charity and the Mundis (Keeley Hawes plays the missus) secretly work for a government agency known as the Bureau of Antiquities. Tasked with ensuring ancient artifacts are kept safe and out of harm’s way, Charles and Catherine are happy to remain scholars at home while Will enters the field for action and danger. This is how Charity comes to possess the fractured amulet key needed to activate the legendary Midas Box (in which anything enclosed within turns to gold), a bauble he gives to Mrs. Mundi who in turn puts one half into each of her sons’ pockets. She and Charles disappear, Felix is kidnapped, and only Will and Mariah are left to save them and stop Luger before he unearths the box from deep beneath his newly purchased Prince Regent Hotel.

This is where the film’s majority takes place as Mariah sneaks in to work as a porter for hotel manager Miss Monica (Lena Headey), enlist the help of a chambermaid named Sacha (Mella Carron), and unwittingly assist an incognito Will disguised as Luger’s hired magician, the Great Bizmillah. While Mariah doesn’t realize this man is his parent’s friend, however, you’d have to be blind not to know. It’s a contentious point I’m cautious to speak about due to spoilers, but where it may have been a surprise in text form it surely isn’t onscreen (intentionally or not). What follows becomes a sort of kiddie Indiana Jones with a child-snatching beast lurking in the darkness, hidden dungeon corridors, and water with mysterious healing properties after coming into contact with the Midas Box they’re all desperately searching to find. Despite the PG rating, it’s nice to see that Taylor et al don’t pull any punches when it comes to killing bad people or letting good ones die. While it centers on a mystical box with impossible attributes and includes a scene with flying tarot-like cards to discover Felix’s location, the filmmakers try their best to keep everything steeped in reality as much as possible. Luger and Charity may go over-the-top to entertaining effect for their contrasting sides, but Barnard and Carron stay even-keeled as teens in over their heads with enough courage to sustain their insecurities and remain relatable to the target audience. Some romantic tension is introduced as well, but it thankfully doesn’t go all Twilight on us by instead staying chaste until an inevitably well-earned kiss at the end.

The twists and turns are about as transparent as Sheen’s Bizmillah disguise and the writing isn’t Harry Potter, but The Curse of the Midas Box never overreaches to fool itself into thinking it is. As a Part One it effectively disseminates exposition with enough adventure to keep our attention on these characters coming into their own (Mariah/Sacha) or revealing their talents (Charity). Headey is sadly wasted; Sule Rimi and Tristan Gemmill play characters primed for evolution in subsequent stories; and Barnard earns our trust with a steely resolve to reunite his family. Sheen shows he’ll utilize the same energy he puts into awards-season fare with every job and Neill seems to be having a blast. All should feel proud of the accomplishment despite its unavoidable up-hill climb, but I’m just not sure it’ll be enough to keep Mariah’s journey going.

Just in case, stick around until after the credits. Whether this epilogue’s revelation leads nicely into a cinematic adaptation of Mariah Mundi and the Ghost Diamonds, however, unfortunately remains to be seen.

The Adventurer: The Curse of the Midas Box opens in limited release of Friday, January 10th.