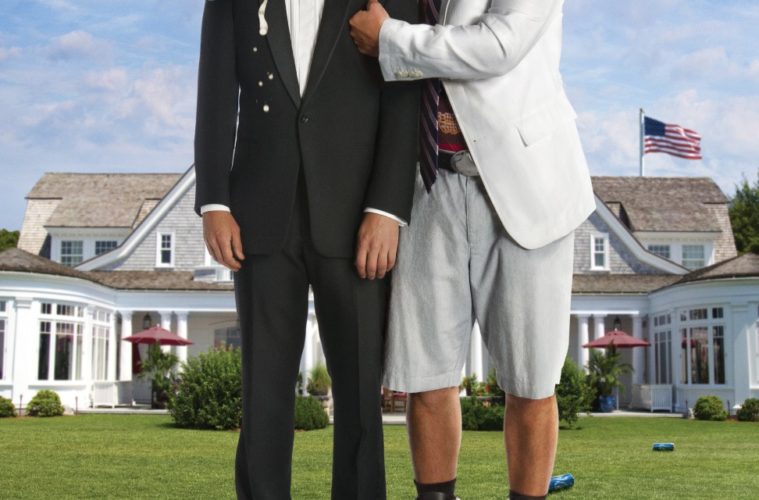 Just when you thought Adam Sandler had hit bottom and could only improve upon a lackluster string of films that make you question the quality of his earlier gems, he proves it can always get worse. From Sean Anders (the director of Sex Drive) and David Caspe (creator of Happy Endings) comes one of the most unoriginal comedies in years. Recycling the ‘disastrous wedding’ trope that I’m sad to say was actually done better in Meet the Parents – a film I also abhor – we’re made to watch a bunch of despicable people be despicable while a slew of Sandler’s real-life friends join the fun so you can laugh at their inclusion rather than at the stale, raunchy jokes coming from their mouths. That’s My Boy‘s only redeeming feature becomes the guessing game of who may show up next. Considering the almost universal vitriol towards Little Nicky, Zohan and Jack and Jill, let’s call it the curse of the “voice.” Taking place in Boston for no other reason than enlisting current New York Jets coach Rex Ryan for some uninspired Bill Belichick love – the relevancy of which disappears if/when he joins another team after failing in the playoffs – Sandler sounds like a parody of Ben Affleck from Good Will Hunting. So far into caricature, it only sounds worse when he leaves the Bacon & Leggs strip club to enter the posh, rarified air of investment banking his son abandoned him to join. Formerly known as Han Solo Berger, Todd Peterson (Andy Samberg) is thus introduced as the polar opposite of his brashly obnoxious father Donny (Sandler). Nerdy, self-hating and a complete pushover, Todd feigns happiness because he’s finally escaped the freak show he was born into.

While Todd was more than justified in leaving a father barely thirteen years older than he, escape from the tabloid fame of the Donny Berger story is impossible. All it takes is fiancé Jamie’s (Leighton Meester) wedding announcement to begin the chain of events Donny hopes will keep him out of jail from failing to pay taxes. With Todd’s mother already serving a thirty-year sentence for statutory rape – Eva Amurri Martino‘s Mary McGarricle was her love’s middle school teacher – the idea of a reunion piques a salacious Geraldo-type, played by ESPN’s Dan Patrick, into agreeing to fork over fifty thousand dollars for the story. If Donny rekindles his relationship with the son he hasn’t heard from in years and gets him to the prison, freedom to waste life in front of stripper Champale’s (Luenell) mammoth, pasty-covered breasts would be his.

Somehow this premise not only sounded good to Hollywood, but also a huge cast of “SNL” alum, acting has-beens and one Vanilla Ice. Ana Gasteyer and Colin Quinn arrive as though transplanted from a rejected skit; Will Forte and Rachel Dratch attempt to infuse inside the main plot as out-of-touch prudes for Sandler’s Donny to harass and Alan Thicke and Ian Ziering show they’re game to accept a two-minute cameo in a crappy film. In fact, amongst the large cast of recognizable faces, it’s Vanilla Ice who shows them all up. Working the fryer at an ice skating rink, the former rapper gets to relive his “Rollin’ in my 5.0” music video days and show some nice comedic – albeit absurd – chops to off-balance his horrible background reactions during the key wedding scene. The requisite paint-by-numbers senile yet ‘hip’ grandma is here (Peggy Stewart) as well as smarmy boss (Tony Orlando), mildly retarded friend (Nick Swardson) and aging legitimate actor hopefully making you forget the stupidity (James Caan). But rather than have witty dialogue or intelligently-written plot progression, the film devolves into a steady stream of vomit, concussions, fake erections and topless women. At one point Sandler even spits a glass of water into a spa employee’s face and expects us to eat it up like it’s the funniest thing in the world. It alongside his penchant for bashing heads with bottles and never spilling his beer is not even remotely funny, yet the audience was on the floor. Maybe I’m completely out of touch or maybe the world is so depressing that the masses need dick jokes to get through the day. I don’t know.

Despite everything I read about That’s My Boy pushing it’s R-rating into grotesquely hilarious territory, it’s really just childishly asinine. And this is coming from a long-time Sandler apologist who still champions Billy Madison as the greatest piece of cinematic idiocy ever created. Either the comedian’s schtik has simply become stale or I have with a couple extra decades gone since. There are still laughs, though, and I do think Samberg effectively portrays both the shy loser who relinquished his manhood years ago and the out-of-control Berger he’s hid from the world, embarrassing back tattoo included. I just can’t condone a couple laughs amidst a poorly rehashed plot I’ve seen too many times to count. At best sitcom-level humor with the cursing and nudity, such a thing sadly seems to be exactly what America wants.

All attempts to instill a sense of personal growth or emotional connection fail. This wouldn’t be a bad thing if the film didn’t continuously seem to want such evolution. I can’t believe I’m saying it, but I think the filmmakers needed to go even crazier. Remove all semblance of story and let these characters loose like during a depraved bachelor after party, a scene earning the biggest laughs because it’s devoid of rhyme and reason. They try so hard to beat us over the head with how Donny is actually more fun to be around then Todd that the clichéd culture clash loses all interest very early. If you want to be stupid, don’t pretend you’re something more. Let your actors go for broke like Milo Ventimiglia does and listen to the ensuing laughter. I can’t complain about plot if you stop pretending there is one.

That’s My Boy is now in theaters.