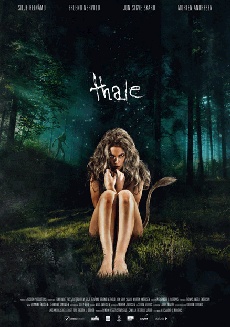 The modern monster movie has recently received inspiration from an unlikely source; the mist-shrouded depths of Scandinavian folklore.

Whether it’s a fearsome Laplandic Santa Claus in Rare Exports, the titular menace of Troll Hunter, or the young vampires of Let the Right One In, Nordic dark fantasy has found itself an international niche. Enter Aleksander Nordaas’ Thale, which introduces the ‘Huldra’, a race of wild faery-folk who sometimes look like a deranged Mr. Tumnus and sometimes like lovely—and mostly naked–Silje Reinamo. Reinamo plays the titular character, a lost girl who finds herself allied with a couple of clueless mortals against forces both fantastical and mundane.

At first glance, it would seem that Nordaas has designs on a grim and gruesome horror story, complete with psychologically sinister set dressing and pseudo-torture underpinnings. Stoic Leo (Jon Sigve Skard) and his nervy partner Elvis (Erlend Nervold) are crime scene cleaners (their company is called No Shit Cleaning) who take on a viscera soaked cabin in the woods where an old man’s mauled corpse was found. While tidying up they discover a feral, naked woman, locked up in the dead man’s cellar. How did she get here? Who was her captor? Why was she sleeping in a bathtub of milk?

Once Thale introduces us to its lithe and entrancing central figure, the nature of the film changes and what appeared to be ghastly becomes mysterious and intriguing, offset by a welcome dose of substantive humor. As Elvis and Leo interact with Thale, whose name and origins are revealed by the dead man’s ancient tape player, she too shifts in the audience’s perceptions, moving from helpless victim to formidable seductress and finally to something a bit more alien, wounded, and wonderful. Nordaas undermines our expectations here, playing coyly with the absurd image of a nubile girl leaned back on callipygian haunches, prehensile tail wagging back and forth. He ultimately subverts the lurid in favor of the relationship between his three main players and their individual concepts of nurture.

Reinamo, whose physicality is altered and exploited to give Thale moments of both grace and ghoulish animal nature, does a creditable job with a role that feels not insubstantial as much as phantasmal. She’s a projection of mythic undertones and latent yearnings, wrapped up in frail human hotness. Her ability to stand above her slender back story, passed on via mind meld instead of properly dramatized, helps Nordaas retain the stark sense of mystery. Nervold and Skard balance the drama with characters decidedly ordinary, and whether it’s Leo’s unwavering complacence or Elvis’ spastic chivalry it is they, not Thale, that ground the film in humanity.

It is hard not to admire what Thale does in its first two-thirds, or feel compelled by the gathering secrets at the edge of the film. The clumsy interaction between Thale and her charges is silly enough to remind us of Tom Hanks’ Splash or Starman, where supernatural contact amounts to misunderstood gestures and bemused reaction shots. I enjoyed the way that Reinamo and Nervold essentially conduct a silent-era romance within the folds of the often bleak setting. It’s also invigorating to watch Nordass cash-in on his balancing act with scenes of Thale’s long-lost clan gradually revealing themselves in the forest and along empty, lonesome roads. If the burgeoning theme of parental instinct feels a bit tacked on, with Elvis and Thale bonding over their own ruptured families, Nordass allows the thread to achieve a degree of plausible intimacy. You can sense a but coming right? Well there’s one here, and it’s sadly lacking a swishy donkey tail attached to the end. If Thale is absorbing enough in its initial 40 some minutes, consider that it runs for a brief twenty-two minutes more than that, wrapping up in a special effects finale that strains the budget to breaking and leaves so much of the emotional effect lying in bloody pieces on the cabin floor. A Romero-esque jaunt into militaristic intrusion and a Spielbergian climax with bizarre creatures traipsing about a storybook wilderness evaporate the magic conjured by the earlier scenes. Thale has avoided easy sentiment and toothless action for most of its running time, and it’s a real disappointment when Nordaas settles for convention instead of carrying his odd premise over the finish line.

Like its spiritual sibling, the Guillermo Del Toro produced Mama, Thale absorbs a great deal of folksy energy and crafts some excellent and foreboding imagery before getting as lost in the woods as its characters. Still, Nordaas proves to be a talented and creative filmmaker even if his ideas weren’t fully formed before leaping into production. There’s an undeniable draw to primal terrors lurking amidst a cold, unforgiving natural landscape with real folk facing them down. Not hard to see why either; when most fantasy reinforces the concept of escape and illusion the Scandinavian brand uses its myths and monsters to remind us that pain and isolation are real, and that what we can count on in the frosty darkness is each other.

Thale is currently in limited release and available on VOD.