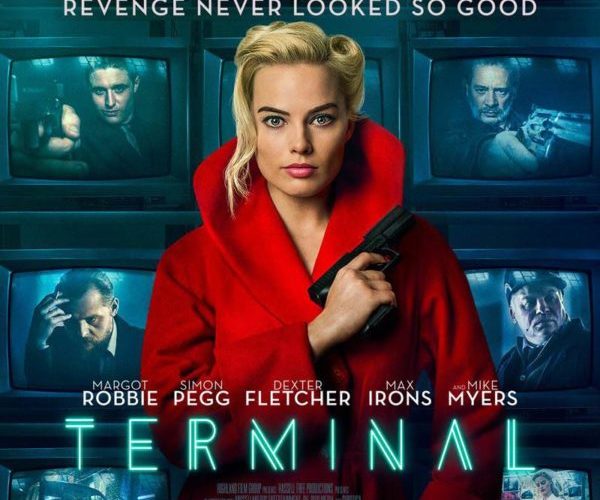 When the seemingly interminable (ahem) Terminal draws to close, it is hard to fight the feeling that there might not be a bigger cinematic misstep this year. And yet Terminal is so wrong-headed that it borders on the laughably enjoyable. Featuring a rather stellar cast led by Margot Robbie, Simon Pegg, Max Irons, Dexter Fletcher, and Mike Myers (!), this noir-action film set in not-too-distant future is powered by some stellar visual and stylistic concepts. It’s a bold, confident film that goes for broke. Yes, it fails, but the effort involved must be acknowledged. There is talent and ingenuity here. It’s a shame, however, that none of it pays off. This is especially disappointing because it wastes another memorable performance from Robbie. Fresh off one of her best performances in I, Tonya, the actress is Terminal‘s stand-out, but any time in which she’s off screen, the movie grinds to a halt.

Robbie plays Annie, a steely-eyed charmer who, as director Vaughn Stein’s film begins, is negotiating to take over the empire of a mysterious, unseen employer. She is, seemingly, an assassin, but one with many different disguises. Robbie clearly relishes the part, and is offered the chance to open the proceedings with lines from Lewis Carroll’s Alice in Wonderland: “There is a place like no other on earth … A land full of wonder, mystery, and danger. Some say to survive it, you need to be as mad as a hatter. Which luckily … I am.” The reasoning behind the Wonderland reference does not arrive until much, much later.

Featuring a borderline incomprehensible collision of characters, the start of Terminal is structured around a series of introductions to the film’s mostly unlikable cast, starting with Robbie’s femme fatale. Her character’s initial backstory is unknown; like the Wonderland reference, the payoff comes with just a few minutes to go. It’s easier to discern the details of the two squabbling hitmen played by Fletcher and Irons. The same is true of Pegg’s wheezing traveler, and the strange train station janitor played by one Mike Myers.

The appearance of the latter is noteworthy, if for the wrong reasons. It arrives about eight minutes into the film, and it is here that the already rickety Terminal goes off the rails. This is Myers in hideous, Kruschev-like makeup and a cockney accent so fake that it makes Dick Van Dyke sound as convincing as Ray Winstone. There are plot reasons for all of this, but they are hard to take seriously thanks to the absurdist casting of the Austin Powers star. It’s a strange return, to be sure.

All of these folks come into contact with Robbie, either as a waitress (Pegg, Irons), a seductress (Irons again), or something in between. Pegg, Irons and Fletcher, and Myers have some connection to each other, and all have an unknown — to them — link to Annie. There are long stretches here that range from the dull to the absurd, and it all culminates in a laughable, Alice in Wonderland-aping finale. It’s the worst thing in an already bad film.

There is a Blade Runner 2049 vibe to some of the design, but whereas 2049 felt like it existed in a full, lived-in universe, Terminal feels like a few sets in Hungary. There is no sense of a world beyond these locations; it’s merely empty-headed stylization. It’s the Thirteenth Floor to Blade Runner 2049’s Dark City, then, feeling oddly dated, like the kind of weak-kneed sci-fi flicks that popped up post-Matrix. Terminal lacks even the memorability of failed future-set efforts like 2017’s Ghost in the Shell or 2005’s Aeon Flux. Director Stein cannot be faulted on his visual sensibilities, but let’s hope his next film is a drastic step forward in the storytelling department.

Terminal is destined to be forgotten. However, if the cast, the look, and the wacky storyline intrigue, it might be worth a viewing. While it’s far from the so-bad-its-good category, the few oddities contained within may delight a few curious audience members.

Terminal opens on May 11.