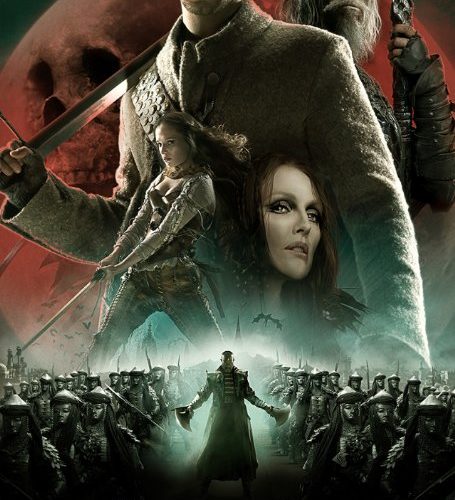 It was a genuinely refreshing surprise to see Jeff Bridges pop up in the commercials during this past week’s Super Bowl, sitting bedside to a sleeping couple, ensconced in a Lebowski-esque aura, humming and chanting like some exotic guru. Although he’s specialized lately in a series of grumpy old codgers on the big screen, this brief and baffling glimpse reminded of the serene, kooky charm Bridges comes regularly stocked with. Sadly, the actor’s newest film, long delayed fantasy actioner Seventh Son, is a far more effective trip to slumber land than Bridges appealingly quirky ‘sleep tapes.’

Sporting a formidable price-tag of $95 million, and marking the first reunion of Bridges and Julianne Moore since The Big Lebowski, Son sounds intriguing on paper; who wouldn’t want to see those two waltz across the frame of a fantasy epic with the right amount of cash to realize its visions? Despite the presence of skilled Russian director Sergei Bodrov at the helm and a script co-written by Locke’s Steven Knight, the film ends up being a pretty but uninvolving disaster that wastes both its leads and the sprawling fantasy universe they inhabit.

Good fantasy fiction, on the page or screen, specializes in plausible characters and world-building details that take the unthinkable and give it a whiff of the possible. Sure, the genre’s shabby reputation usually conjures images of warring barbarians, fey elves or over-designed dragons, but when the right creative minds can wrestle that potential to the ground, a Lord of the Rings or Game of Thrones can emerge from the muddle. In Seventh Son’s case, there’s nothing here but muddle, as the script takes Joseph Delaney’s novel The Spook’s Apprentice and turns it into amateur night at your local LARP. I’ve not recently seen a picture advertising the fantastic be so committed to following every mundane cliché to its final, gasping conclusion. Monsters, shape-shifters, ghosts and witches roam the canvas of the film, all of them searching for a fresh angle or something original to do.

The basic premise has been barely dusted off from the sword-and-sorcery heyday of the 1980’s, with Bridges playing crusty, persevering knight Master Gregory, once a prestigious Falcon knight who now travels the land putting down evil with a series of typically short-lived apprentices, all of them bearing the dubious requirement of being ‘the seventh son of a seventh son.’ Son is full of odd and mysterious motifs like that, but very few of them are properly explored beyond a quick, arcane sound bite.

For instance, Gregory’s new charge, a farm-hand named Tom (played by Ben Barnes as if he never shrugged off Prince Caspian), carries with him a magical stone that the evil Mother Malkin (Moore’s deliciously smirky witch) requires for world annihilation. That stone and Malkin’s ambitions (she’s mostly pissed that her once-love Gregory threw her under the metaphorical bus to save humanity) have no clear emphasis or justification, other than the fact they feel like necessary tropes. Malkin’s army of fiends, some of which include creepy ghosts, a transforming grizzly, and a multi-armed warrior ripped right from a Harryhausen film, also feel like half-realized window dressing. Without a fairly complex storyline, Seventh Son could have easily been a brisk and enjoyable monster mash, but even that’s squandered because the critters have no character and Bodrov never quite knows how to showcase them within his marauding frame.

At a passing glance, Seventh Son at least looks gorgeous in regards to its medieval scenery and the way Bodrov weaves his camera through its craggy wild wildernesses and creaky, desolate castles. The special effects are less successful, mostly because they feel so routine; an occasional design or conceit will catch our interest—Malkin’s return to her ghost-infested headquarters, or the witch’s own transformation into a dragon featuring her fiery tresses—but tired fight sequences suck out most of the energy. Barnes as the titular Son is irredeemably bland and his intended love affair with lusty witch Alice (Alicia Vikander) is a non-starter that eats screen-time.

As for Bridges and Moore, they mine just enough juice from the characters to prevent Seventh Son from being completely excruciating, but it’s also a crushing shame to see them so wasted on a project like this one. Moore probably comes off the best, relishing her time as villainess, but she’s sparsely used and frequently shuffled out for CGI. Bridges is the most compelling aspect of Son, though, drawing his face up in a contorted drawstring, and forcing out words that sound like Sean Connery gargling with cookie dough. It’s a been a few years since he played Bad Blake and Rooster Cogburn, but his Master Gregory still retains that cocky, idiosyncratic hillbilly flair; there are certain angles where the actor looks like the perfect, insane hybrid of Johnny Cash and Willie Nelson.

For all of that, though, the performance lacks charm and exuberance, which are two trademarks that have always set Bridges apart both on and off the screen. The entire film suffers from a similar extraction of spirit, and so it stumbles to and fro like a wayward corpse. The stars may briefly reanimate it, but it’s still gonna stink up the theater.