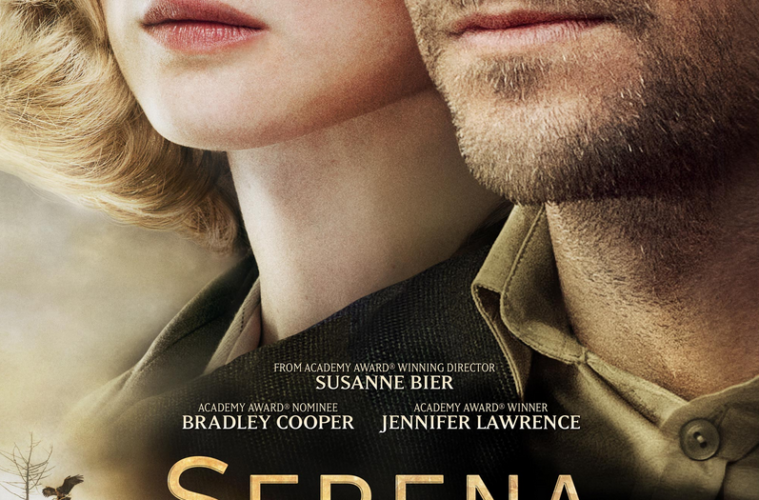 Academy Award-winning director Susanne Bier isn’t without her misfires, especially when it comes to her American films. The Things We Lost in the Fire is a dry drama saved by Benicio del Toro’s performance, but when it comes to her latest American picture, Serena, it’s an impossible mission for her two stars to make this long-in-development adaptation anything more than a stiff, awkward, and one-note period piece.

Set during the depression, this adaptation of Ron Rash‘s novel follows George Pemberton (Bradley Cooper), an owner of a Timber company. Pemberton faces plenty of obstacles with the current financial landscape: there’s locals who want to preserve the land, unsafe working environments, and the necessity of bribes to those in power to keep his business afloat. Though life seems to pick up for Pemberton when he meets Serena (Jennifer Lawrence). Richard is immediately enchanted by the young woman, to the extent that he pretty much pops the question and marries her after they first meet.

The moral of this story: don’t marry people you know nothing about. Serena ultimately ends up causing more problems for Richard. She’s a leech on his land and personal health. Both Serena and Richard have to make tough decisions, but it’s Serena who’s more than willing to get her hands dirty. While the businessman having to watch the girl of his dreams turn into the girl of his nightmares is an idea full of promising drama, it’s disappointing from start to finish. There’s nothing painful or terribly dramatic about Serena’s transition from a strong, sharp woman to a bloodthirsty nut, because from the start of the film she’s played as more of a fantasy than a real person. Serena isn’t about a tortured or complicated relationship — it’s about caricatures. There’s very little moral complexity to explore here because rarely does Bier’s film feel like it is in step with reality.

Serena is simply an inauthentic period piece. Some actors are just too modern for this kind of film, and that seems to be the case with Bradley Cooper and Jennifer Lawrence. In their defense, they’re hamstrung by Bier and screenwriter Christopher Kyle‘s choices, but neither actor ever comfortably inhabits this style of acting. Cooper’s accent, for example, is wildly inconsistent. As for Lawrence, there’s always something off about her performance. There’s never a sense of internal life to Serena. Kyle’s script and Lawrence’s performance leaves everything on the table. The titular character, despite her hardships, never earns empathy either. As the third act turns Serena into a monster, the film ends up becoming more of a slasher flick than a drama. It’s a bizarre and almost admirable turn of events, but it’s more engaging as a tonal failure than as a risky and challenging narrative choice. One of the few bright spots of the third act is that we get more of Rhys Ifans, playing a character more fascinating than the two leads.

Ifans has a striking look, and it’s obvious cinematographer Morten Søborg simply reveled in his alluring and mysterious presence. There’s a handful of beautiful and atmospheric shots that, sadly, service a weak story. Bier’s film is far from being the disaster some early buzz suggested, but it is a major disappointment considering all the talent involved.

Serena is now available on VOD and hits theaters on March 27th.