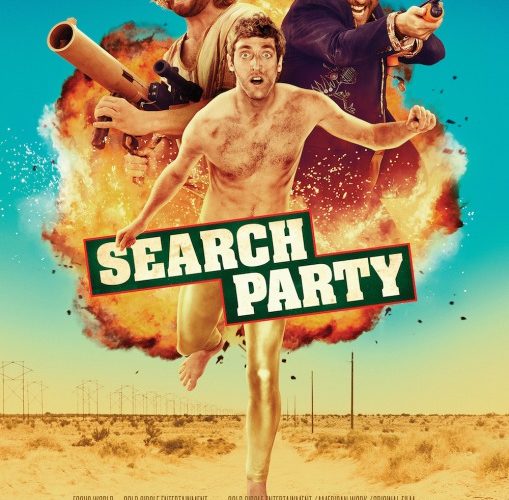 Scot Armstrong’s Search Party, which is packed to the gils with comedic talent — most of whom, thankfully, have found work that’s more tailored to their abilities — is mostly just a terrible movie. But while it’s a deeply unpleasant experience, dragging down even the most potentially funny scenes by ramming in tone-deaf jokes or indifferent rhythms, it’s also instructive in demonstrating how not to make incredibly funny people humiliate themselves for 90 minutes.

The plot of Search Party has been repeated ad nauseam so many times in the years since Todd Phillips’ irritatingly influential fratty touchstone The Hangover that not even the movie feels particularly invested in mapping out the geography or progression of its narrative. Search Party is set in motion within the opening minutes as as Nardo (Thomas Middlemitch) passes around a joint in a hotboxed van with his two life-long friends, Evan (Adam Pally) and Jason (T.J. Miller), lamenting his impending wedding. Comparing the forthcoming nuptials to suicide, his friends begin to question whether Nardo’s worries are more than just cold feet. And, inevitably, Jason — spurred by Evan’s mutual questioning of the wedding, as well as his own belief that anything said while high is true — stages an intervention and trashes any possibility of them getting married. Miller has had nearly a decade in the tank as the obnoxious-but-lovable best friend in movies, yet his actions here reach past fallible idiot and into pure sociopathy. It’s telling that his most enterprising moment comes when he converts a juicer into a vaporizer.

Plunging into a depressive spiral, Nardo soon attempts to win back Tracy (Shannon Woodward) by finding her in Mexico where she’s staying by herself in their honeymoon suite. Wacky incoherence ensues on the way, and Nardo is soon naked in Mexico, entangled in the exploits of cocaine dealers who have no time for the bizarre sequence of events that led to Nardo’s appearance. In these sequences, Middlemitch brings an admirable lunacy to his performance, launching his string-bean physique into the physical comedy and interspersing his rambling lines with lizard-tongue frenzy.

Luckily, before Nardo was ensnared, he managed to call Evan and Jason about his predicament. Jason, terrified for his missing friend, carries Evan out of bed the night before his big meeting and drags him along for a cross-country expedition. In numerous sitcoms, Pally has specialized in a placated cool, but here, all too often, he mostly just feels sleepy as he’s forced to fall on his face over and over.

Their adventure may somehow be even more elliptical than the Hangover series, as it seems they’re barely an hour out of L.A. when they’ve met a tough grade-schooler who moonlights as a fake-ID creator, as well as a crossbow-wielding magician who practically fetishizes organ-harvesting. At times undeservedly sweet and equal-part jarringly nasty towards its characters, these scenarios are reflective of the uncontrollable pitch shifts within Search Party.

The cast throughout all these sequences is consistently underutilized or placed into unfunny situations, though some try their best. Jon Glaser excels in brief scenes as a patented dirtbag while Jason Mantzoukas knows his way around even the most shtick-heavy material. Similarly, character actors such as Lance Reddick, Krysten Ritter, and Allison Brie try their best to enliven the surroundings, but it’s all pretty fruitless — they’re saddled with bland stereotypes or as the straight man / woman to chaotic situations.

Every one of these players is just suffocating from the dead air at any given moment as they try to salvage each individual scene. Search Party isn’t always unfunny, but it always grows to be unfunny. The aforementioned set piece involving a 9-year-old who makes fake IDs is ruined minutes in as it powers through with lines that double as child-molestation innuendos, and just keeps going on from there.

This is the type of comedy where the flop sweat is nearly always present as each player tries to lift the comedy, only to tragically belly-flop over and over. No one here is phoning it in, but with material this bad, it would be hard to blame them.

Search Party is now on VOD and in theaters.