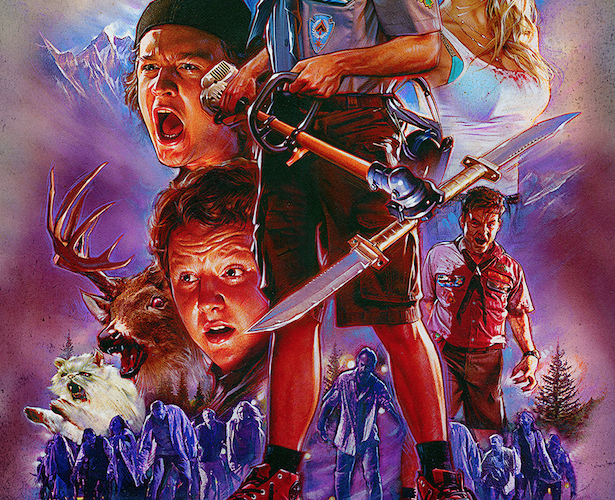 What is there to say about Scouts Guide to the Zombie Apocalypse that its title doesn’t say? At first glance, it seems to be the perfect picture for seventeen-year-olds who have just earned a driver’s license and the freedom to see it without a parent or adult guardian. However, it’s likely most seventeen-year-olds looking for an R-rated comedy have grown out of the brand of humor this one attempts to deliver.

Directed by Christopher Landon (Paranormal Activity: The Marked Ones) from a script by Landon, Lona Williams, Emi Mochizuki and Carrie Lee Wilson, it provides exactly what you’d expect: blood, gore, boobs, and nature hikes. Its sexual politics are only slightly more evolved than those truly weird 80s horror films AGFA and the Alamo Drafthouse are preserving. Here we get a zombie attack by oral sex, zombie boobs, and one silly gag that I admit had me cringing and laughing — perhaps it’s not all bad.

The zombie apocalypse has other plans for our heroes. With the outbreak started by a janitor at a secret research lab in a sequence that gave me hope for what was to come, Scouts Guide to the Zombie Apocalypse is not without occasional wit — I just wish it were a sweeter affair than it is. As far as buddy comedies go, Superbad this is not, despite moments that suggest as much. Also a bit odd is Denise, a kind of bad-ass manic pixie dream girl with a backstory that includes a jerk ex-boyfriend who taught her how to shoot at the gun range. Denise is somewhat more fleshed out than she thankfully would appear to be in our introduction to her, but is too rarely given a chance to step outside of her role. The same stands for our troops, even if they grow up, taking their scouting knowledge to the local hardware store to become DIY Mad Maxes on their local Fury Road.

Scouts Guide to the Zombie Apocalypse is, as far as horror comedies go, kind of fun. It’s a familiar mashup of familiar tropes you’ve seen done better elsewhere from Zombieland to Shaun of the Dead. While never outright dull, some of its gags land big laughs (the moment I hinted at earlier involving a second-floor escape) while others are less effective. While this is by no means a landmark entry into the zombie comedy genre, there have certainly been worse films made from similar parts. The film delivers the kind of entertainment fit for a certain maturity level; your inner seventeen-year-old may enjoy this more than you’d care to admit, and against your better judgement.

Scouts Guide to the Zombie Apocalypse is now playing nationwide.