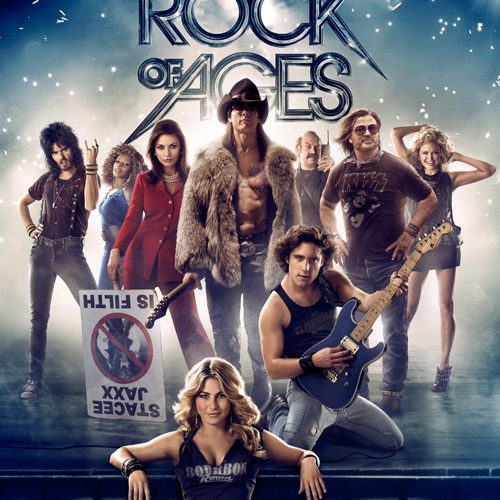 A few years ago Adam Shankman showed he had more in him than what The Pacifier and Cheaper by the Dozen 2 suggested, by wonderfully bringing John Waters‘ Hairspray to the big screen. It was energetic and lively, John Travolta in a fat suit and all. With his adaptation of Rock of Ages, he only captures a little bit of that previous magic on screen.

For the first thirty minutes, Shankman’s film represents the gravest fears the film’s trailers gave off: no story, just a nonstop, meandering celebrity karaoke party. Once the story picks up, it remains somewhat thin, but showering bursts of energy here and there. The two leads, Sherrie Christian (Julianne Hough) and Drew Boley (Diego Boneta), are partially to blame for the lack of a full blown good time. Sherrie has come to the Sunset Strip from Oklahoma to make it as a singer. As she soon learns, almost everyone at the Sunset strip also believes they have what it takes, including her soon to be flame Dew Boley, whom she comes to work with at the Bourbon Room. Run by the burnt out Dennis (Alec Baldwin), he’s joined by the playful Lonny (Russell Brand), who ignited the career of Stacie Jaxx (Tom Cruise), a tired, aging, and flamboyant 80s rocker.

If anyone is the film’s truest weapon, it’s Cruise. The star character actor is committed, giving a performance that’ll make or break the movie for some. The actor isn’t afraid of embarrassing himself, from donning silly tattoos to having a pet baboon named “Hey Man.” The Stacie Jaxx story would make for a fine stand-alone film. There’s an arc, momentum, and liveliness to Cruises’ scenes many of his lead co-stars (and songs) don’t have.

Some of the tunes will leave the viewer scratching their head, wondering what purpose it is serving. Although the most memorable beat not featuring Cruise involves Baldwin and Brand singing “I Can’t Fight This Feeling Anymore,” it unfortunately serves no plot-driven purpose. This is the film’s biggest problem, and it’s most disappointing: every actor, along with Shankman, is obviously having fun, but there needs to be more meat to it all to make it a true blast. With a threadbare story, we’re only given energetic hints at what could have been another Hairspray, ending up as an uneven film which ranges from a joyful to bloated. Rock of Ages is an 90-minute movie (even 80 would suffice) which has been unnecessarily stretched out to two hours, thanks to screenwriters Justin Theroux, Allan Loeb, and Chris D’Arienzo.  There’s so much happening in Shankman’s film, and yet not enough to warrant the running time. Despite being a rather bizarre film, Rock of Ages has an audience, one that’ll most likely find themselves tapping in excitement. If you’re not fully swayed like some audiences will be, well, at least Tom Cruise, Paul Giamatti, Alec Baldwin, and Russell Brand provide enough enthusiasm to make a few of Rock of Ages‘ lesser qualities tolerable.

Rock of Ages is now in wide release.