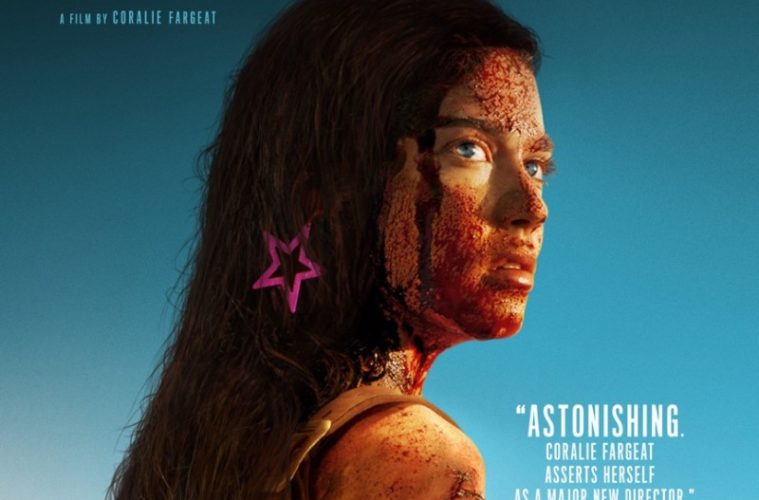 Review: ‘Revenge’ Introduces a Paradise that Devolves into Hell

The front half of Coralie Fargeat’s debut feature Revenge provides audiences the sort of sensory overload that hits like a sledgehammer. You might not think this will be the case considering things start off with a serenely static shot of desert expanse while a helicopter approaches from the center of the frame, but the hard rock riffs kick in soon after with music video style glamour shots of Jen (Matilda Anna Ingrid Lutz) and Richard (Kevin Janssens) starring into the distance. They’re here for a wild weekend of sex and solitude — a welcome combination considering his wife and kids are back at home. Fargeat shoots her introduction with a male gaze towards female objectification, Richard’s fantasies being realized thanks to a very game Jen always ready to please. The close-ups show her waist at the refrigerator, her body a thing to stare at while she saunters carefree through the secluded mansion. But we’re not the only ones ogling. A scream sees Jen drop her apple, the camera eventually panning to the sliding glass door to find Stan (Vincent Colombe) and Dimitri (Guillaume Bouchède) panting with eyes firmly affixed to her chest. They are dressed in hunting equipment, guns slung on their backs. And they are welcome if early, friends of Richard’s who weren’t supposed to arrive until after Jen took the chopper back to civilization. Suddenly the gaze takes a shift into dueling perspectives: the lustful perfection of her and Richard’s fitness opposite the crudely brash appearance of the newcomers. It’s heightened yet also very real.

Fargeat is toying with us, much like Stan and Dimitri believe Jen is with them. She provides a couple more needle drops met with electricity and sexual tension, fun and jealousy stirring feelings in the couple as yearning takes hold in the others. The camera moves from smiling faces and coy glances to slack-jawed desire all while the aforementioned apple browns on the kitchen counter before becoming home to hungry bugs unable to ignore their impulses. The metaphor is hardly subtle, but you should know by now that Fargeat isn’t interested in subtlety. Playfulness is replaced by uncertainty, uncertainty by fear. Views of bare skin are replaced by the gross smacks of teeth chewing into junk food as voyeurism turns to predatory aggression. Paradise quickly devolves into hell. It’s a fast-paced prologue to the violence we’ve bought tickets to see. We know exactly who everyone is and their motivations whether duplicitous or cowardly. The men have everything to lose if Jen is allowed to return home and speak of what occurred. She has just had everything taken from her, so the quest to return the favor is believable. Unfortunately the inevitable cat and mouse game that commences proves much slower than what preceded it. The style remains — deliberate compositions and methodical progressions — but the silence of the desert can be deafening. Where shiny surfaces of materialistic gains and translucent masks of monsters feigning humanity once were comes blood-soaked sand and a hardened, malicious frustration. Polished surfaces hiding nightmarish potential dissolve into graphic bodily mutilation.

This act isn’t without merit where expertly gross-out make-up/special effects are concerned. It even allows for some legitimate surprises regardless of whether their outcomes prove exactly how you’d expect. The addition of peyote and an impossible tattoo (to remind you that style has always trumped substance here) supply additional color and intrigue, dragging out the runtime so that each mini battle to the death lasts twenty-plus minutes. You feel it too as the “hunt” is always less suspenseful than Fargeat appears to believe. At a certain point I just wanted to get to the climax we know everything is working towards because the journey only delivers more gore. For some that will be more than enough. I personally wanted to see if Fargeat had more up her sleeves. Thankfully she does. Right when I was ready to resign myself to the thought that Revenge simply started too strong to maintain itself, Fargeat brought me back from the brink with a tense labyrinthine conclusion making use of its locale and blood as plot propulsion. Finally we arrive at a fight that could go either way because there’s nobody else left to take out. No one said that Jen must prove victorious when all is said and done. It becomes hunter versus hunter, both slipping on slick floors while an infomercial plays on the television. That initial sense of surreal absurdity with a genre culture clash willfully trapping yuppie elites within a western wasteland returns to unironically juxtapose those aesthetics together. We watch façades crumble before our eyes.

Fargeat wants us to underestimate Jen, dismissing her as a helpless mistress plaything. She wants us to overestimate Richard as a potential knight in shining armor and Stan as the embodiment of pure evil calling the shots. But none of it is true. Jen can handle herself, Richard can reveal his sociopathic tendencies, and Stan can be pushed into a corner to be verbally and physically abused by someone in a position of strength who’s as psychologically menacing as he is to those he believes exist to serve him. I only wish the middle third didn’t forget that sense of elaborately layered intrigue for straightforward violent delights. Because if Fargeat can sustain the purposeful visual and narrative complexity of those two bookends throughout her next film, watch out.

Revenge hits limited theaters and VOD on May 11 before streaming on Shudder this fall.