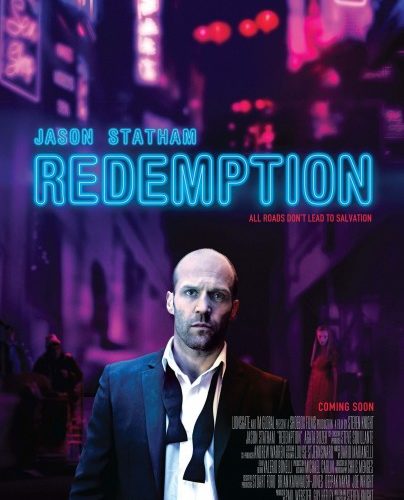 Here it is, ladies and gents, that serious Jason Statham film few were expecting. Once called a more narratively-appropriate Hummingbird, now called a more Jason Statham-y-appropriate Redemption, this film serves as a small indie art-house surprise right square in the middle of the zombie/superhero part of the year. That it stars an action hero who would be easily suited in any one of these tent-poles only adds to the surprise.

Statham plays Joseph Smith, an ex-soldier with severe PTSD. Following a disjointed flashback to a military situation in Afghanistan that Joseph was a part of, we meet our hero on the dirty streets of London amongst a small commune of homeless people. Equipped with wet rags and long, stringy hair, Joseph has little to live for aside from his friend Isabel (Victoria Bewick). Seconds later, a couple of thugs show up and start bullying those in the commune. Isabel pleads with Joseph not to fight back. He acquiesces, and we watch our action hero get mercifully beaten down while his friend is taken away. Joseph is able to escape, finding refuge in a posh, empty apartment in another part of town. Upon learning the owner will not be back until October, Joseph decides to use the place – and all of the clothes and means within it – to turn his life around. What follows is Joseph Smith (now going by the alias Joey Jones) and his transformation into a modern-day Robin Hood-cum-Avenging Angel. The film marks the directorial debut of longtime screenwriter Steven Knight (Dirty Pretty Things, Eastern Promises), who is determined to mesh the physical prowess of his leading man with some untapped dramatic ability. And for the most part, the alchemy works.

Die-hard fans of Statham will surely be disappointed by the severe lack of action set-pieces here, the actor himself admitting in interviews that the film served as a sort of experiment to test his acting chops. And while the man still manages to serve some clean punches and kicks-to-faces throughout, he spends much more time brooding and contemplating on his sins.

Helped by a dynamic score from Dario Marianelli and a solid performance from Agata Buzek as Cristina, a local nun and potential love interest with a dark past, Statham carries this small drama through some troubled pacing and crude character decisions in the second act. Knight appears to be a filmmaker determined to merge genres with his first swing of the bat, and the attempt is certainly admirable, if not entirely successful.

Thankfully, neither director nor leading man pull any punches at the film’s finale, ending on the strongest possible note from a narrative prospective. The result is a somewhat messy, solid piece of storytelling that may very well mark a turning point for Jason Statham, the actor.

Redemption is now on VOD and in limited release.