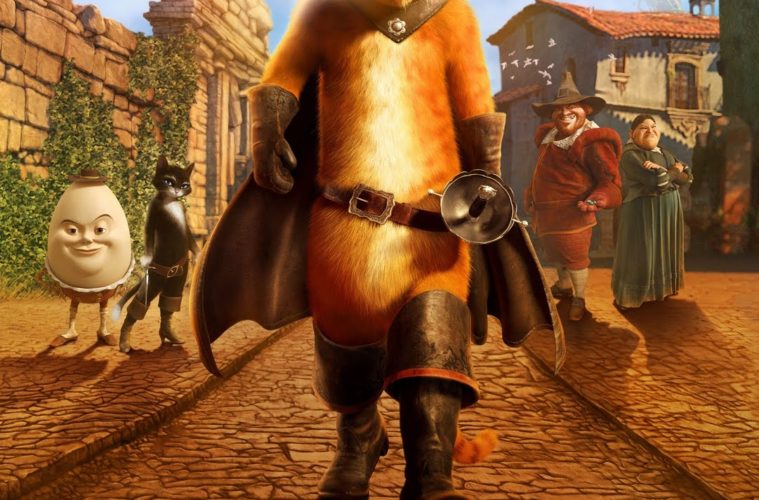 Before Shrek left his swamp to spawn a four-feature franchise I sadly had no real interest in continuing past the original, a Latino kitty cat roamed the lands of Far Far Away. Without a home once San Ricardo turned its back after the public bank was robbed with him left holding the moneybags, Puss in Boots must survive on the fringes of society to woo the ladies and endlessly thieve. Needing a big score for an influx of cash, Puss returns to his adopted city and strong-arms the nefarious bad guys at its local watering hole for information. They reluctantly tell him of the beastly twins Jack and Jill, recent procurers of another famous Jack’s magic beans. Puss recalls the stories of golden eggs at the other end of those legumes’ beanstalk and sets out to steal them for his own, crossing paths with a mysterious cat looking to do the same.

An origin story of sorts, Antonio Banderas returns to voice the titular role of Zorro—I mean Puss in Boots—with his accented confidence and smooth maneuverings. Personified as a womanizing swashbuckler, his feline tendencies aren’t without their own place in the tale. Known to widen his eyes for emotional mind control via their knee-crippling cuteness and lap up his warm milk from a shot glass as though alcoholic beverage, cat lovers will be rolling in the aisles from the playful characteristics on display. Only charmingly funny to someone like me who enjoys watching cats chase after reflected lights on the floor as cruel torture, those scenes are just the beginning of what ultimately is a very enjoyable animated work. Not quite brilliant on levels beyond satisfying fare for the family, fulfilling that genre qualification successfully should never be seen as a detriment to its quality.

Definitely existing in the same canon as Shrek before it, the inclusion of fairy tale legends doesn’t stop with Jack (Billy Bob Thornton) and Jill (Amy Sedaris). Their villainy is uniquely spun to thankfully not relegate them to hills and pails of water, but instead be married and looking to cease their evil ways to start a family of ambiguously gendered monsters. Also involved is the Golden Goose, serving as the spoils of thievery once its eggs prove too heavy to take down the beanstalk, and Humpty Dumpty (Zach Galifianakis), a childhood chum of Puss’s whose own villainous ways have torn their friendship apart. Various references to their fairy tale woes are present, but each is combined seamlessly to that of the main plot. And with a wealth of other Far Far Away inhabitants to either be introduced or recycled from our lovable green ogre’s stories to come in the future, don’t be surprised to see Puss in Boots become its own lucrative franchise.

But whether or not we see more cat-like antics soon, I can’t help admit how much fun his first installment is. First and foremost for the kids—they were eating up the cuteness factor like the popcorn acorned in their cheeks at my screening—Puss in Boots doesn’t deny the adults some action-packed sequences and generation-spanning laughs. The dynamic between Humpty and Puss is well fleshed-out through flashback and the introduction of our hero’s love interest Kitty Softpaws (Salma Hayek) is a nice bit of mysterious wile despite her obvious secrets. The trio’s adventure to get the beans and travel to the sky castle for its riches is a fast-paced thrill ride rife with jokes big, (an enjoyable reveal at the end more funny for its creepy execution than its inventiveness); small, (a Golden Goose who looks like a mildly retarded Easter chick); and surprisingly not obnoxious when it should, (a recurring kitty with eyes like those pendulum cat clocks popping up to cover its mouth and ‘ooo’ when a joke is too scandalous to leave alone).

It all comes full circle with small characters such as Puss and Humpty’s adoptive mother Imelda (Constance Marie) and San Ricardo’s Comandate (Guillermo del Toro) frequently coming and going as well as the truth to why the cat and egg find themselves with a tense air of hatred between them. Kitty Softpaws is a nicely conflicted femme fatale, even if the script never tries too hard to disguise her ultimate role in the charade; Jack and Jill are funny with their gruff demeanors and litter of baby boars; and Humpty himself was endearing enough to make me think it was the sweeter, softer voice of Patton Oswalt rather than the often abrasive Galifianakis. Besides him, however, only Banderas stands out as more than just a voice playing a part. The Spaniard is obviously having a great time voicing this suave feline in leather footwear, his excitement showing through time and again.

And while the story itself never reaches farther than its linear trip for golden eggs and the redemption afforded to its leads, it stays cohesive enough to never appear as though a string of gags meant to fleece parents of their hard-earned cash. Themes like friendship and being good despite adversity are prevalent above the comedy and the gimmick of 3D never becomes a hindrance despite only really adding anything during a couple high-speed camera pushes across desert sands. The animation of Puss’ fur is impeccable and the wispy clouds traversed through the sky are gorgeously realistic. Add details like Humpty disguising himself as a golden egg; the lazy, off-kilter eyes of the Golden Goose; and a well-choreographed dance fight reminding me of American Wedding, and the humor is never forced or absent. Absurdity may run wild and the overall plotline may be much simpler than hoped, but just as its brilliant TV-trailer spoof of Isaiah Mustafa’s Old Spice commercial pleasantly surprised me, I was unwittingly won over by Puss in Boots’ overall charm.