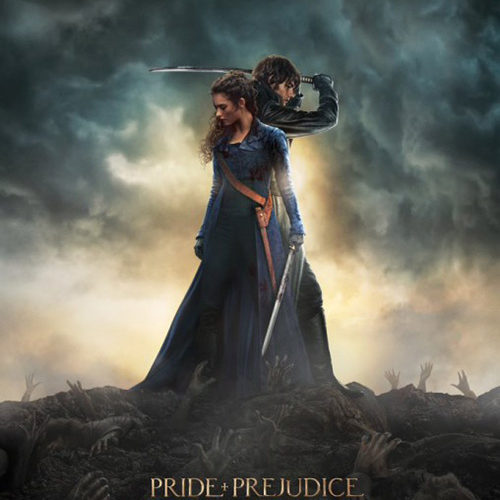 [Review] Pride and Prejudice and Zombies

From the opening moments, Pride and Prejudice and Zombies wears its awkward charm on its sleeve. The self-serious Mr. Darcy (Sam Riley) has crashed a ball in 19th-century Britain looking for a zombie amidst a gathering of the wealthy. With a neat trick up his sleeve, he manages to root out the flesh-eater and dispatches him without much pretense in violent fashion — from the point-of-view of the zombie itself, sparing us gory details. The bystanders are shocked and appalled. In this world, like most that make up the zombie genre, there are people who seem keenly prepared and able to survive the plague of the undead and those who seem distraught no matter how aware they are of the situation. In the world of PPZ, we have socialites that doddle around in corsets and finery with knives tucked into their garters.

Loosely based on the plotting of Jane Austen‘s Pride and Prejudice, the book upon which this film is based, by Seth Grahame-Smith, was a mash-up of genres using public domain titles. A bestseller in 2009 and quickly optioned, it languished in production hell before finally being reanimated into the PG-13 flick it is today. Initially succeeding on its flashy charms, Pride and Prejudice and Zombies gets the look right, but the action eventually wears thins.

After some voiceover flourishes and a brief introduction that cleverly utilizes pop-up-book-style art, we are off to PPZ’s world. There are high production values and plenty of gorgeous sets on display that would feel perfectly at home in any 19th-century feature. Despite all the PG-13 hacking and slashing in dispatching the undead, the entire affair is appropriately silly. Levity and light-hearted charm are the keys to this timid success, which largely rests on the shoulders of Lily James as Elizabeth Bennet.  She is the fourth-oldest of the five Bennet sisters, who all live on an estate near the one where Mr. Darcy’s wealthy friend, Mr. Bingley (Douglas Booth), recently moved in.

While Mr. Bennet (Charles Dance, perfectly cast) wants his daughters married off to save the estate as he has no male heirs, he also wants the best for them overall. Meanwhile, his pushy wife Mrs. Bennet (Sally Phillips) continues to make moves for them to find suitors no matter how well matched they are. So in comes a parade of single men that constantly fight over the eldest — and supposedly prettiest — of the sisters, Jane (Bella Heathcote), who then have to turn their sights on Elizabeth. I will refrain from giving details of the nuances within Austen’s novel that remain mostly intact here. Suffice it to say that while the novel is closely adhered to in terms of the character relationships, there are, considering the undead element, much more dastardly causes and effects at play.

Perhaps the best situation to come of this mash-up is how the zombie addition serves to highlight the themes within Austen’s work. There’s a reason her novels have stood the test of time. Thankfully James and her co-stars are up to the task of bringing the mash-up to life by keeping a streak of romance intact amongst the havoc. An initial weak link in the cast, Matt Smith as Mr. Collins, is over-the-top unbearable at first. Flamboyant and egotistical, it is only later when these qualities become believable that he starts to serve as the reliable comic relief. Everyone else largely plays it straight, as they should, with Darcy never doing much beyond being dour. But it’s his relentless caution that wins one over as we’re well aware that the world they live in is dangerous.

That danger is often fended off by the cast with knives, swords, and muskets — quite well, in fact. It’s clear during one sequence with the Bennet sisters sparring with each other that Steers was keen to have the actresses clearly shown doing their own stunts. Quick cuts are utilized, but each dodge and blow that lands is felt. The key sequence is when Mr. Darcy and Elizabeth let out their anger towards each other in a brawl that is both flirtatious, fun, and brutal. No punches are pulled, but tables are smashed and the sequence lands with just the right balance of tone.

However, this sequence puts to shame everything that has come before and after, showcasing how much more the film could have done to sell its conceit. What we are left with is a period romp that supplies us with a slew of information, overburdening the plot. Sure, some of the changes are clever, but most of it — particularly the last act — feel overly clichéd and tacky. What results is a Jekyll & Hyde monstrosity that does well at establishing humor, then kicks over the bucket and tries to stick the landing.

Despite an initial thought that it may succeed with this concept, Pride and Prejudice and Zombies is a mixed bag. James is effortlessly charming and every scene benefits from her presence — particularly in the first half, as it moves at a bracing clip and showcases the fun one would expect. In trying not to be self-serious, it stubs its own toe. By the dull third act, much of its initial charms begin to feel stale. One can’t help but feel a better film is underneath. In Pride and Prejudice and Zombies, the bones are there, but it only sometimes lets you have a taste.

Pride and Prejudice and Zombies opens in wide release on Friday, February 5.