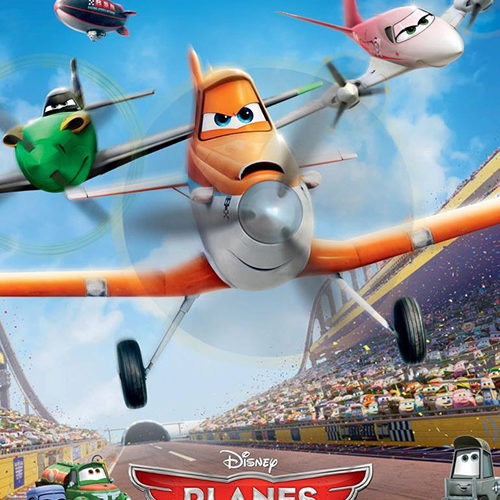 What should be an auspicious occasion for DisneyToons Studios earning its first theatrical release since 2005’s Pooh’s Heffalump Movie, the Cars spin-off Planes sadly does little to affirm the decision. Actually, the fact Disney supposedly decided to upgrade its status because of how impressive early scenes looked only makes things appear more like a cash grab to milk the universe for extra box office dollars. A second read-through of Jeffrey M. Howard‘s script—he of home video Tinker Bell fame—shouldn’t have been necessary as it’s pun-heavy dialogue and racially motivated stereotypes are pretty prevalent on first-blush. It has all the trappings for cheap laughs at the expense of an audience in love with personified vehicles racing around the world like toys rather than a plotline, rendering its stellar animation a non-issue. A perfect example of the disparity between DisneyToons and Pixar, Planes skews too young to warrant its big screen run. Using the original Cars‘ plot as a springboard, the films’ message of being all you can be and dreaming big falls flat without the nuance of character development and empathy cultivated for Lightning McQueen and his cohorts. Dusty Crophopper (Dane Cook) is already a great guy who puts friends first. So, with no evolution necessary to show growth, Howard and director Klay Hall simply play out their underdog tale on the racetrack with action replacing pathos. Add moral support from forgetful dullard, best bud Chug (Brad Garrett); smart female moral support Dottie (Teri Hatcher); and sage veteran Skipper (Stacy Keach) and you get a much too resonate feeling of déjà vu throughout the opening act.

The Cars world has always had its share of racially motivated humor, but it’s never been more token than here. Sinbad appears as a sassy forklift; Carlos Alazraqui is so far into his Latino flavor with El Chupacabra that it seems more parody than respect for lineage; and John Cleese and Priyanka Chopra get involved as Bulldog and Ishani respectively—characters that are merely embodiments of their accents. And I don’t even know why they enlisted Julia Louis-Dreyfus to fake a French Canadian named Rochelle. Val Kilmer and Anthony Edwards’ cameos as Echo and Bravo at least make sense due to their Top Gun history, but it’s not like they’re on screen long enough to realize it. No, it’s all broad shtick from anyone willing to take the paycheck and add an international flavor. To that end it does flesh out the main plotline of Dusty trying to be the first crop duster to fly in the Wings Around the Globe tournament. The racers travel through Mexico with Aztec pyramids serving as hangers; India with tractors grazing in the field—they are this universe’s cows after all so the line from Ishani about Indians believing all planes are recycled into them is cute; and across the Pacific Ocean’s volatile weather. A little taste goes a long way, though, and Planes goes so far overboard that only the youngest viewers can enjoy the performances as goofy rather than offensive. We simply don’t get to know them as more than love-crazed romantics or egotistical bullies to look beyond the surface.

This is ultimately the film’s downfall from connecting with audiences on a level beyond the awe and fun of its main demographic. We honestly don’t even know anything about Dusty and his pals from Propwash Junction either besides his wanting to escape a life of dusting the same patch of land everyday. Chug’s Mater stand-in is all over-exuberance; Dottie’s Sally equivalent is only here for nerd-laughs with scientific lingo needing to be parsed down at every turn; and Keach’s Skipper is far from the father figure Paul Newman created with Doc Hudson. The only reason he even agrees to help Dusty here is because the kid already made the race. And the grand revelation about his history is far from the dramatic shock the filmmakers appear to think it is. Cook does a decent job making the lead underdog likeable and Roger Craig Smith a better one turning Top Dog Ripslinger into a bona fide villain, but everything else is hollow. Obviously created as a way to entertain the kids who ate up Cars and Cars 2, though, Planes exists to expand their world and maintain familiarity and marketability in the process. It serves this purpose nicely too because despite a restless audience of youngsters completely checking out during the multiple instances of military rhetoric and extensive backstories for characters told breathlessly as though an afterthought, many children exclaimed loving the film by its end. Unfortunately for the adults escorting them at ten-plus bucks a pop, the same result could have been achieved at home on DVD while working in the other room.

I did laugh once, though, around a third of the way in when all the cars/forklifts in a bar realize a crop duster has been entered into the race and one verbalizes the thought on everyone’s mind, “He’s going to die”. Leave it to me to laugh at the macabre joke while the rest chuckle at puns like “Lug nut up” or car names inserted for swear words (because parents need kids saying “Oh, Shelby” where “Oh, crap” or it’s stronger sibling would normally be heard). Disney should cut its losses and release the rest of the trilogy as originally intended. Let the kids get excited at the store so Mom and Dad can fork over fifteen bucks for unlimited plays. The sad truth is that it will probably still win its opening weekend anyway.