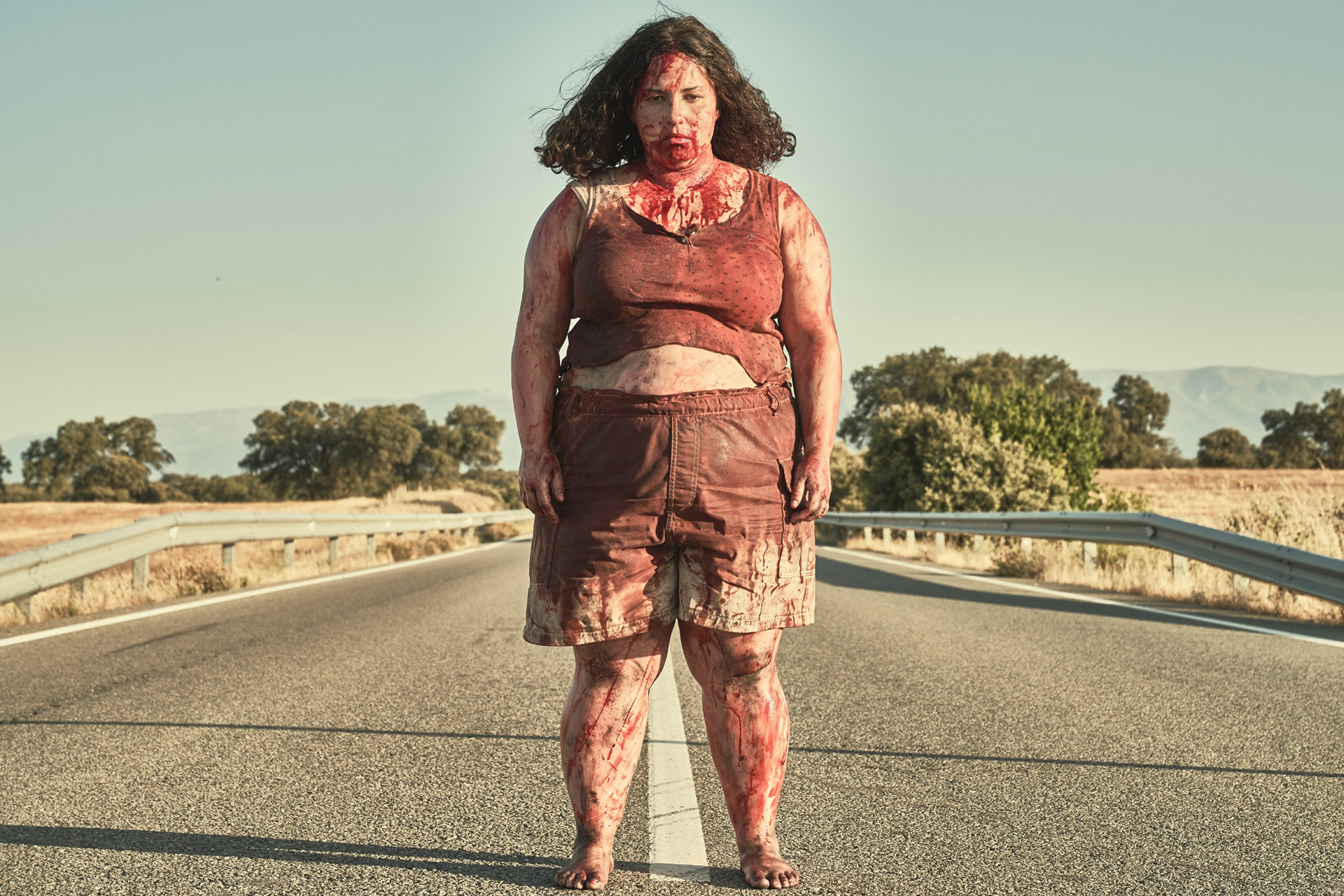 There’s a reason Carlota Pereda films Sara (Laura Galán) urinating through her clothes as an old friend (Irene Ferreiro’s Claudia), who’s drifted away towards the clique that bullies her, puts a bloody hand on the back window of a serial killer’s van while screaming for help. We need to understand her fear. Just because Sara is a teenager who’s been brutally victimized by an entire town of peers doesn’t mean she’s measuring the situation and deciding to let Claudia, Maca (Claudia Salas), and Roci (Camille Aguilar) die. She’s afraid for her own life. What if she tries to save them and the killer (Richard Holmes) watching from the driver’s seat simply throws her in the back? So she freezes. And, to her surprise, he helps her instead.

Therein lies the complexity of Piggy, a feature expansion of Pereda’s short film of the same name. All Sara knows is being bullied. She’s literally structured her daily summer schedule around it. Work at her parents’ (Julián Valcárcel and Carmen Machi) butcher shop during the day to avoid the ridicule outside. Head to the community pool afterwards so that it will be empty for her to take a dip without being call “bacon” or “fat” or any combination / synonym of both. Go home for the night while everyone else does what popular teens do. And since her bullies generally go out of their way to punish her for daring to escape their wrath, an act of kindness—no matter if from a homicidal predator—means something. It earns silence.

That silence serves Sara as much as it does the murderer. She doesn’t want the town to know Maca and the others took things so far that she almost drowned in the pool nor that she had to walk home in just her bathing suit because Claudia (bullied via peer pressure to turn on the friend with whom both still wear matching bracelets) let them take her clothes and towel. And she definitely doesn’t want anyone knowing she stood by doing nothing while those three girls were kidnapped and presumedly chopped into pieces in the woods. Best-case scenario is that the cops suspect Sara of the crime due to a motive of revenge. Worst case is the killer finds out she snitched before coming for her too.

Thus Sara waits. She stews and hides and tries to become as small as possible—despite her physical size making it impossible to truly disappear. Because it’s not just catty teens and misogynistic boys tormenting her. Her mother does too. She forces Sara to hide sweets. She embarrasses her in front of the neighbors and prevents her from being a kid by demanding she study instead. Pereda is pretty much putting Sara into a figurative vice, slowly twisting the handle to see when she’ll pop and just how destructive she’ll become. We’re talking years of emotional and psychological abuse. At a certain point we even hope she snaps and kills everyone just to earn a well-deserved release. While guilty of harming her, however, they don’t deserve to die.

This duality keeps us invested. Does Sara’s conscience get her to tell the authorities what she saw? Or does her pent-up frustrations and the much-needed romantic attention from the killer dissolve whatever guilt she harbored? It’s a tense push-pull marked by an effective strain of dark comedy considering the absurdity of the scenario. Sara has already allowed herself to be complicit to violence, so what’s stopping her from crossing the line herself? None of these people “get” her, after all. He does. Yet there’s more to it than love or payback. There’s also a growing sense of empowerment stemming from the knowledge that she possesses. It only takes one compassionate soul (José Pastor’s Pedro) to genuinely ask for her assistance before she’s reminded of her humanity.

And one more act of aggression or dismissal to remind her humanity is overrated. Don’t expect to know how it’s all going to end; Pereda makes certain to save the blood for the finale. Everything else is mired in the unknown with screams in the night and heated confrontations by impotent adults desperate for answers. One of my favorite parts of the whole is when Sara’s mother physically defends her against Claudia’s mother (out of self-preservation since she’ll ultimately chastise her daughter and demand to hear a truth she’s already conjured in her mind) and the screen cuts to Holmes laughing in the distance. He loves the chaos of supposedly strong people discovering they’re completely helpless. He hopes to mold Sara into a partner facilitating that revelation.

He may do it too depending on whether Pereda skews things towards fantasy or reality. It’s a coming-of-age for Sara in many ways due to a sexual awakening by her “bad boy” admirer and the fact everyone turns their attention towards her to save those who have done nothing to warrant her pity let alone sympathy. Galán fearlessly embodies the character’s conflicting desires, subjecting herself to some extreme torment along the way. (The pool scene with Maca et al. and its aftermath courtesy of a truck of teen boys is tough to stomach due to just how vicious her aggressors are despite her only provocation being overweightness.) Whether joining Holmes or stopping him, our sole wish is that Sara reclaims control of her identity. Blood spills either way.