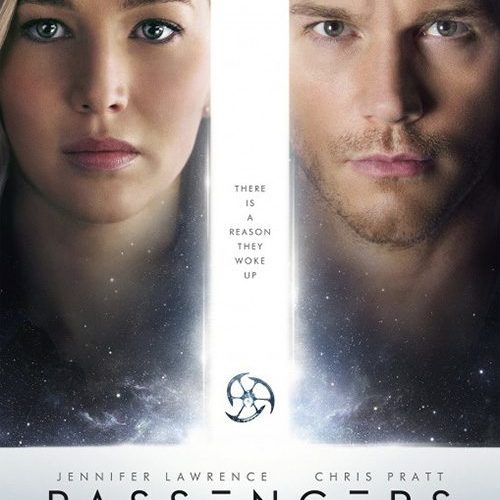 Jim Preston is a creep. There’s no getting around the fact that his actions are detrimental to one’s perception of the character and the film as a whole. The ultimate success — or failure — of Passengers will hinge on how offended one is by the premise, and whether the story ultimately makes up for it. What is on screen is absolutely gorgeous, albeit hollow because the production design is so far ahead of the two leads — Chris Pratt as Jim Preston and Jennifer Lawrence as Aurora Lane — and their chemistry.

In order to discuss Morten Tyldum‘s film in any detail, we’ll have to convey the central premise, which happens inside the first act. Jim is on a massive interstellar spaceship with 5,000 passengers and hundreds of crew, but they are all dead asleep in stasis pods due to the journey between Earth and Homestead II taking 110 years. Everyone is supposed to wake up a few months before they land and get to party it up and mingle before landing and populating the new world. Unfortunately, a particularly pesky asteroid field is not sensed by the incredibly advanced auto-pilot system and one piece gets through the shields and knocks out power temporarily, with Jim as the unfortunate casualty that gets woken up way, way too early — 90 years to be exact. Needless to say, this is the set-up for a last man on earth scenario with all the typical hoops and hurdles.

That is, until he stumbles upon one of the passengers’ pods, the current home of a sleeping Aurora Lane. He’s immediately struck by her beauty and goes on an incredibly stalker-like journey of reading everything she has written and her interviews for the trip she’s embarked on. He’s slowly falling in love with not just her visual features, but her mind and spirit as well. That’s the notion, at least, as if reading words someone writes will provide the entirety of one’s personality. So he has an idea. A terrible idea. Why not wake her up and pretend he doesn’t know why she woke up. Jim, himself an engineer, has already spent a year trying desperately to find out how to re-enter stasis with no luck. He’s stuck, so he decides to clean up the place a bit, shave his crazy man-beard and strand Lane with him as the object of his desire. He does this after agonizing over it, but the deed ultimately is done.

She reacts similarly to him upon waking: complete disbelief. She goes through the same logical questions with the same results. There’s no going back to sleep. The pods are supposed to be fail-safe, yet here they both are. He doesn’t immediately tell her, rather he implores the only friend he has on the ship, the android bartender Arthur (played in charming fashion by Michael Sheen) to let him tell Aurora the truth. The chemistry between Lawrence and Pratt is crucial to pull off a premise like this, yet they seem like they’d be good friends more than lovers. Something as simple as them having similarities in any discernible way is absent, but the script forces them to match up, and that’s that.

The next huge hurdle to overcome is the biggest and most obvious issue: how will she react when he tells her? Of course, drama must be fostered, so he can’t simply break the news to her before they’ve essentially fallen in love amidst the gorgeous backdrop of whirling gizmos and future tech. She instead finds out from Arthur in a convoluted misstep. And she loses it, in one of the film’s more accomplishes scenes. It shouldn’t shock you if I told you the film ends up not sticking to that line of action. We simply get some offhand remarks and some anger.

The beauty of science fiction is that it often provides us with a scenario that allows us to explore it in a meaningful way. Think like procreation in Children of Men, religious zealousness in The Mist, or even the idea of occupation by another race in Battlestar Galactica. These are fully developed and explored topics — not so in Passengers. One may think Jon Spaihts‘ script, which landed on the Black List nearly a decade ago, got drowned out by the lofty budget and its adherence to a PG-13 rating, but having read it, much of it remains intact. The frustration that there isn’t more of a thorough exploration of the “twist” and the resulting human emotions is still here and Tyldum’s audience-friendly tone does the drama no favors.

At least the visuals are often gorgeous, with the film’s fairly substantial budget seen on the screen. One inventive sequence in zero gravity, trapping Lane in a bubble of water that she struggles to escape from, is reminiscent of the rotating hallway sequence in Inception. From the quirky robots to the way the ship is rendered and designed, the entire production design is truly top rate. This feels like a luxury liner, something difficult to achieve for such a sterile environment with cleaning robots always at the ready.

Ultimately, we are left with a film that has a supremely creepy and troubling premise as the central idea. A man is stranded on a ship and falls for a woman and strands her with him. That has the potential for a complex story ripe for discussion, but it’s all strictly set-up, failing to make the journey more meaningful than a gorgeous-looking science fiction romantic drama. It’s a shame that Passengers couldn’t improve on its initial hook. With a distinct lack of chemistry and a director without the know-how to find a deeper meaning in story, the shoddy foundation of the premise quickly collapses.

Passengers is now in nationwide release.