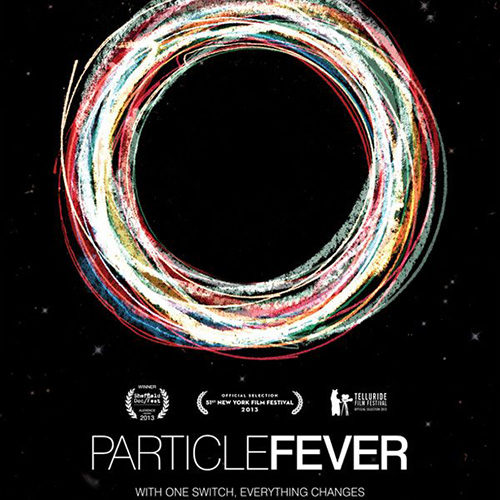 Science! You either see it as the backbone to understanding or you don’t, and everyone who doesn’t, may want to avoid Mark Levinson‘s Particle Fever because it’s first and foremost a document about the subject’s cool factor and importance. If you’re a creationist and everything you hold true about our origin comes from a book written centuries ago by multiple people who potentially had a simultaneous psychotic break to hear voices, all sense of wonder and discovery is nonexistent in the present. What point is there to search for answers when you know death brings salvation? Only in Paradise can you discover something new and real. For scientists, however, the rush of adrenaline uncovering a truth never before seen by humanity is as crucial an experience as a Catholic meeting God. They’re finding miracles. The fact we somehow find ourselves in a universe possessed by the specifically measured particles necessary to exist is perhaps the biggest miracle at all. First there were protons, neutrons, and electrons; then came myriad others swiftly following suit until a standard model could be formed. The theoretical physicists thought up the hypotheses and the experimental physicists put them into motion to prove which were true until their findings led to a missing piece of the puzzle that is the glue holding everything together. Discovering this “God particle,” named after founder Peter Higgs, became the paramount mission of the field, with thousands of physicists all over the world embarking on a twenty-year experiment that could either provide them all the answers they seek or show how it was all just a waste of time.

I know nothing about any of this—those Greek mathematical symbols are gibberish and the words Higgs Boson were meaningless until my girlfriend’s excitement spilled forth about the results in 2012—and yet it’s absolutely captivating. Their search commenced with the genesis of the Large Hadron Collider (LHC) located at CERN in Geneva, Switzerland and the men and women holding their breath in the knowledge physics itself could be completely debunked at the flip of a switch. If their calculations were so wrong that nothing happens once they smash two protons into each other at close to light speed, they’ll have to question and scrutinize the field to understand why. If it does work the Higgs particle could finally validate whether the Supersymmetry or Multiverse ideology reigns supreme. I know it’s all science talk and big words, so much so that Levinson condenses time when Fabiola Gianotti is explaining their Higgs finding, because we have no clue what she’s saying anyway. It’s one of many smart maneuvers on behalf of the director and his subjects to really help the layperson comprehend what’s happening—dumbed-down version or not. To them the possibilities of this experiment is bigger than landing on the moon as they’re literally reproducing the physics present at the time of the Big Bang. And as David Kaplan says, they’re seeking to understand the very basis of nature and what it is that truly gives us form. Some like Monica Dunford only started seeking it less than a decade ago, but others have been searching their entire lives.

So it’s no surprise they’ve perfected a way in which to keep those gravely out of their depth to at least be on close to the same page as those reveling in the chaos onscreen. With animated diagrams and eloquent descriptions, Particle Fever teaches you a rudimentary understanding of the concepts so you may know whether it’s interesting enough to dig deeper and learn more. The surface is barely scratched, but my comprehension was a hundred times better than it was when the film started. And honestly, when it comes time for revelations to be made, the celebratory screams or pale white stares of shocked disappointment are enough to put you in the mix and care about the outcome. You feel the highs and the lows as the experiment begins right before catastrophe threatens to derail everything. We meet eccentric characters with subdued emotional palettes such as Savas Dimopoulos; wunderkind Nima Arkani-Hamed prepares himself in case his ideas that we exist in a Multiverse are true, meaning we’ll never discover anymore particles after the Higgs; and a slew of other highly excitable scientists doing what they can to bring this plan to fruition. Debates are had, backstories are shared, and even the overly-dramatic craze by the public who thought turning on the LHC would create a black hole destroying the world are touched upon. Edited by Oscar winner Walter Murch, the film becomes an extensive look at the four-year culmination of tens of thousands of man-hours for a project no one could ever guarantee would work. He and Levinson have distilled it perfectly for mass consumption while still letting scientific minds enjoy the experience.

Particle Fever is a rousing adventure of invention about something unlike anything since the atom bomb and its documented in full. We see the players in their natural habitat slaving away on what could easily be worthless work, crossing their fingers and salivating at the prospect of making the impossible possible. Schools can use it as a way to explain physics like they haven’t been able to before by portraying the effort that goes into a field so many believe is a waste of time and resources. Kaplan says it best, though, when replying to an economist about the monetary value placed on the LHC endeavor with, “I have no idea.” He reminds us that radio waves initially were simply a different form of radiation so the sky is literally the limit where its potential utilization is concerned.

Particle Fever is now in theaters in New York City and arrives March 7th in Los Angeles before expanding nationwide.