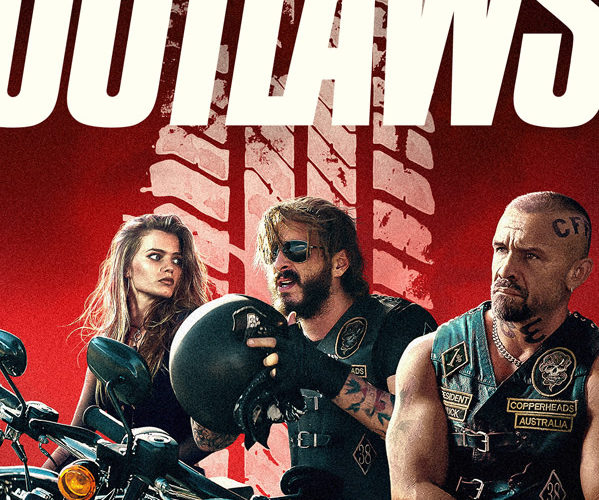 Review: ‘Outlaws’ is a Biker Gang Drama That Reinforces Stereotypes of Masculinity

I told myself not to mention Sons of Anarchy in my review for Outlaws before sitting down to watch. My reasoning came out of a desire to judge Stephen McCallum’s film on its own merits without trying to compare to something as zeitgeist-y as Kurt Sutter’s tragic downfall of a “good” man forced to do bad things in order to achieve salvation. What’s ironic, though, is that you don’t have to get too far into Matt Nable’s script to wonder if he was hoping we’d make the comparison. With his “should-be” leader Paddo (Ryan Corr) trying to take his Copperheads Motorcycle Club legit against Knuck’s (Nable himself) actual president returning from jail with violence and bloodlust in his veins, the underlying core conflict is almost identical.

The television show obviously has an advantage with its expanded breadth to flesh out characters, cement motivations, and set-up the pieces it needs to fall. Ninety minutes simply aren’t enough for the father-son relationship Knuck and Paddo supposedly share via a single throwaway line. The fact this admission only arrives when their ideological fracture is beyond repair makes things worse since it becomes jarring to think these two could have ever liked what the other brought to the table. I guess three years apart is like eons in the rough and tumble life of a biker. They made one angry enough to feel threatened by the man he trusted to protect the castle and the other cognizant of the first’s unrelenting brutality in lieu of any business acumen. While we don’t receive flashbacks portraying their love for one another in the past, we are introduced to the women who very clearly helped push them apart. And here’s where Outlaws falters most when stacked against Sons. Knuck’s wife Hayley (Simone Kessell) isn’t a maternal figure to Paddo and thus conflicted. Paddo’s girlfriend Katrina (Abbey Lee) isn’t an upstanding citizen trying to pry her love away from criminal life. These women are instead completely devoid of compassion, empathy, or promise for a future that doesn’t put them in some semblance of control. Hayley is the one whispering into Knuck’s ear that Paddo can’t be trusted and Katrina is leaning into her devil’s advocate role to guilt her boy-toy into staging a coup on the back of a bullet.

They’re both objectively smart in this maneuvering and quite literally positioned to prove they’ve been pulling the strings since way back. Nable and McCallum even do some things at the end to cement this truth as something they strove to work towards despite failing along the journey to make it believable. Why? Because the filmmakers play too hard with gendered and sexist MC stereotypes to give these women the room to breathe as anything more than cliché. They go out of their way to supply Paddo with a simpleton brother (Josh McConville’s Skink) to not only ignite the hell-storm of old versus new guard that pits President versus VP, but also to act on what these women say while the others waffle in their sudden fits of conscience. There’s no subversion of machismo then — just reinforcement. It’s almost as though Paddo and Knuck stop themselves from crossing a line they don’t actually want to cross with each other because they know it will eat them from the inside out to think they were forced to give up on brotherhood for their lady. So Skink becomes the too-dumb patsy that ultimately puts them onto the path Katrina and Hayley so desperately hoped they’d travel on their own. The one character that literally exists for no reason other than screwing things up for everyone else becomes the lynchpin to everything that happens. Somehow sensitivity gets equated with naiveté through Skink and Noisy (Sam Parsonson), the latter playing a key role in the film’s second example of poor optics.

Because beyond the pervasive misogyny turning Katrina and Hayley into real-world sirens leveraging love for power in ways that hope to have us see two muscle-heads ready to murder with impunity in a more conflicted light lies rampant homophobia. It isn’t a spoiler to say Knuck found a taste for men in prison that wasn’t merely a means to an end. Again, though, rather than let that realization lead the narrative to worthwhile commentary, it merely reinforces the toxicity of men like him rejecting truth for someone else’s notion of masculinity. It does this by not finding a strong enough purpose for the subplot to separate Knuck’s rage from desire. The film allows his affair being with a man to actively be more deplorable than if it weren’t. You can spin that as being accurate to MC culture and these specific characters, but that doesn’t make it less difficult to stomach this day and age. Simply portraying horrible people as being horrible isn’t enough. There’s still that lens of glorification insofar as this lifestyle being worthy of cinematic immortality. You can’t therefore try to show how cool these men and women are for constantly undermining each other to steal control for themselves without also allowing their homophobia to be pushed to the background as a consequence of manhood — especially when you’re also playing up brotherly love by blood via Paddo and Skink and by respect via Paddo and the charter members following him against Knuck. Outlaws conflates homosexuality with betrayal and never sets the record straight.

Is it competent otherwise? Sure. Major events like a tense opening between Paddo and rival club leader Sugar (a scene-stealing Aaron Pedersen) that puts Skink’s head on the chopping block somehow becomes a forgotten thread covered by Copperheads in-fighting, but they’re often enjoyable to experience regardless of waning import. Lee and Kessell are both good in their roles despite neither character being more than two-dimensional fodder for last-minute shock value. Corr and Nable are equally as effective as men at crossroads despite never being able to stand on their own two feet when duty to “colors” is paramount to individual pride. Without that nuance to rip their wounds open, though, it’s tough thinking anyone but hard-drinking criminals already in an MC to crack skulls will find much appeal.