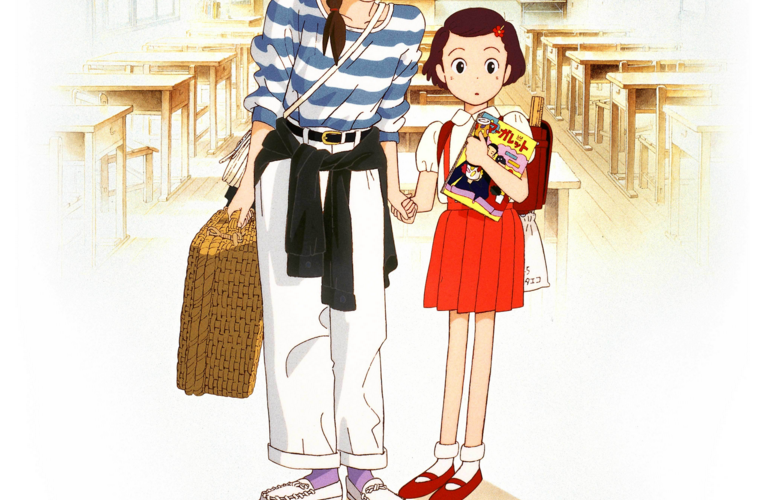 Only Yesterday originally came out more than two decades ago in Japan through Studio Ghibli, but Isao Takahata’s mature, humane slice of life drama couldn’t feel more achingly relevant to the narrative concerns of this decade, and cinema’s renewed interest in the experiences of spiritually adrift young women staking their own path. And even while Only Yesterday is treading familiar emotional terrain, it feels far from programmatic.

Adapted from the manga Omoide Poro Poro, which translates to “memories trickle down,” Only Yesterday, centers on Taeko Okajima, a single, late 20-something who’s lapsed into memories of her fifth grade self in search of what’s missing from her life. Taeko is a self-professed career woman, working in a nondescript but successful job in Tokyo, but she’s not immune to the pressures of getting married, and her societal expectations as a woman. Every conversation with her family is now sprinkled with daggering assumptions about her future as a spinstress,

Takahata thankfully isn’t interested in placing Taeko on a collision course with romance as an end. There is eventually an unexpected romance that creeps into the film through the introduction of a far-flung family friend named Toshio, but it’s a matter of serendipity more than the crux of the film, and the character’s ethos intersects with the larger themes of the film.

Daisy Ridley, Star Wars: The Force Awakens’ meteoric breakout, leads the voice cast of this English dub as Taeko’s adult voice. And while Ridley’s performance in Star Wars was in part so memorable because of her expressive body language, she shows an innate skill for voice acting. As Taeko, she brings a velvet, dynamic warmth to the character whose line readings at any given moment can communicate either mournful nostalgia or earned wisdom.

Dev Patel, as well, manages a tricky balance with the character of Toshio, a romantic interest who’s a gawky goofball, but also has an emergent flintiness when it comes to his passions. For some animation fans, dub has become a dirty word for fear that it dilutes the purity, and while there are a few vocal performances from the child actors that verge on screechy or stilted, this is a vocal cast that mostly enhances more than distracts from the storytelling.

As with latter period Studio Ghibli, the animation is stunning without needing to rely on fantastical imagery. There’s moments of magical realism like a balletic flight through the sky after talking to a crush, or contorting optical illusions in the grass, but they’re clearly moments of visual exaggeration.

Being set in two time periods – the late 60s and 80s – the animation also has its own respective signatures for each. In the past, the animation has a brighter, blinding lightness with a shallow focus, and enshrouded white corners. The characters are drawn with an expressionistic outlining, and there’s a clear contrast between the character designs and the sky.

The backgrounds as well have a transparently 2D quality that almost presents the memories like their own sound stages. The animation in the present tense, meanwhile, relies on a more naturalistic lighting and less elevated color palette. Elements of fantasy aren’t an intrusion into the frame, but an extension of the landscape.

Set in the 60s and the 80s in Tokyo and Yamagata, Only Yesterday is one long dialogue between the past and the present, and a larger looming question of where Taeko belongs. This is a journey of self-actualization, but this isn’t a path along a series of pre-determined points in Taeko’s personal history.

When the time of personal understanding finally arrives, this is the rare film that doesn’t tell the character what the moment means. Whether it’s through the film’s self-awareness of memory, or the character’s ability to view these moments with such inward and outward clarity, there’s an agency here that doesn’t feel pre-ordained or phony.

That’s in part because Takahata creates characters that feels so entirely lived-in. The time period and female perspective are deeply ingrained into the story’s point of view, with large portions of the film dedicated to not only the awkwardness and confusion of a first crush from an adolescent’s perspective, but a compassionate view into how young girls feel the need to hide their period from other classmates.

Takahata has a surprising eye and ear for how kids, and especially women, view and talk about these subjects. He doesn’t shy away from the details in terms of either Taeko’s self-consciousness or the social ecosystem of shame and acceptance. And this snapshot isn’t the set up for a punchline at all, but instead a reminiscence about the strength of the sisterhood Taeko felt with both friends and people she didn’t think she even wanted to know.

With so much of the story being enmeshed in the place between memory and the present, there’s many chances for the film to misstep into belabored sentimentality or forced revelations, but Takahata maintains an assured but light hand in keeping the segmentation of the film balanced, but still colorfully specific.

The film’s gaze is firmly aimed at Taiko’s navel, but these beats of searching rarely feel indulgent as much as a method of filling in the margins of Taiko’s personality. Even a scene that threads in economic disparity through the perspective of an outlier character doesn’t come across as a self-conscious lecture, but as a moment for empathetic reflection about how and why that character wears a social mask. The past bleeds into the present, but there isn’t the sense that the story is just tallying a checklist of past experiences to move the present forward. Rather, there’s a relationship of important and superfluous moments paired together.

Takahata’s cinematic voice brings to mind auteurs as disparate as Oliver Assayas in his personal as political approach or Yasujirô Ozu in his view of the intimate mundane. For instance, one of the most individually satisfying flashbacks comes late as Taeko reminisces about an aborted acting career, but what initially appears to be another jigsaw piece of Taeko’s larger motivations is merely a richly realized tangent.

Ozu’s name is sure to be thrown around regardless considering that Only Yesterday is passionate about some of the most attendant themes of Japanese cinema, namely the karmic relationship inherent in being nature’s stewards. Coming decades before society is consumed by a compulsive fear about the lack of organic materials in our every meal, the film drives home a moral responsibility in respecting the Earth without ever directly referring to this goal.

The country life holds a life force that functions beyond merely a change of scenery for Taeko’s character. Drawn with a twinkling beauty, the pastoral landscapes of Yamagata are presented with a haunted magnetism that evoke Terrence Malick, especially when accompanied by Eastern European choral chanting. All of this visual fawning doesn’t feel like lip service to past masters, but rather a small part of a passionate, deeply personal story about how to let the past recede, and embrace the present.

Due to its unavailability stateside (a sole subtitled showing in 2006 on TCM was an event for animation fans) and especially its focus on a female protagonist and a grounded narrative, Only Yesterday has built a reputation as one of the best and most unique anime films of all time.

That’s a lofty reputation, and one that ensures that it will disappoint some viewers expecting a grandiose masterpiece. Only Yesterday is unabashedly modest, but in its twin dialogues between the past and the present, and the undying lure of the country and the city, it’s a singularly specific story whose message echoes decades later.

Only Yesterday is now playing at NYC’s IFC Center and expands on February 26th.