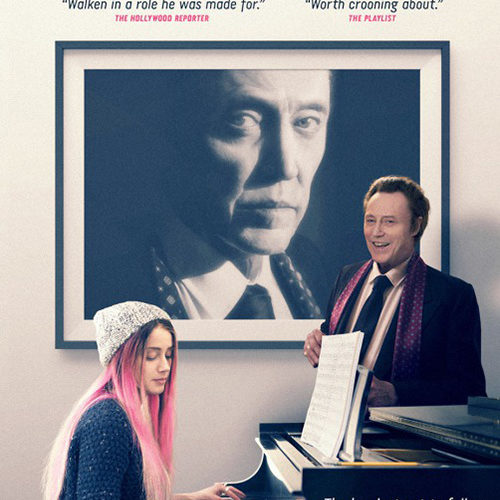 There’s a bothersome element to films about fictional musicians: the quality of the original songs, and the suspension of disbelief required – scratch that, demanded – to buy them as listenable. In the 2010 comedy Get Him to the Greek, it’s impossible to believe that Jonah Hill’s record company rep, a guy whose tastes run from iconic punk to Mars Volta, would ever jam to the hokey, generic drivel produced by Russell Brand’s fading rocker. Then there’s the notorious “Sugar High” finale in Empire Records, the Led Zeppelin knock-offs by the Almost Famous band Stillwater, and Ethan Hawke’s awful grunge snarling in Reality Bites. (Is it me, or was this sin disproportionately committed in the 1990s?)

Added to the roster is One More Time, a dramedy about a struggling New York singer/songwriter, Jude (née Starshadow) Lipman (Amber Heard), who decides to freeload at the estate of her father (Christopher Walken), a washed-up, Bobby Darin-type crooner with the stage name of Paul Lombard. The film doesn’t do itself any favors by pairing the characters’ medleys – both of which were co-written by writer/director Robert Edwards and composer Joe McGinty – with a soundtrack featuring Nina Simone, Neko Case, and other talent who make the song Jude performs at one point sound like scribblings out of a high school girl’s poetry notebook. The comparison appears more glaring when one realizes that 29-year-old Heard, with her ratty pink hair and store-bought punk uniform, looks like the world’s oldest teen.

The ineffective quality of the music composition rubs off onto the script, a dragging narrative occasionally punctuated with workable humor. The lacking quality is mostly due to the reliance on clichés and easily understood visual cues to establish relationships. Is there any denying the tired Cool Sister/Uptight Sister dynamic when, during one scene, a bikini-clad Jude lounges in a jacuzzi while her sib Corinne (Kelli Garner) sits nearby wearing her thickest turtleneck and cardigan set? Admittedly, I’ve always had a soft spot for Heard, and she does an admirable job as the counterpart to Garner, who shines as a woman whose insecurity over being the bourgeois careerist in a clan of creative types often slips past her hard-nosed exterior.

They trade barbs as their father, a womanizing sleaze whose exaggerated stories encourage his rock star myth, prepares for his comeback as the novelty opener for the Flaming Lips. Much of the dysfunction plays out over family dinners in Paul’s home – located in what he describes as “the slums of the Hamptons” – where everybody talks over one another and intimate conversations are lost in the din. With all the incessant blather, it’s interesting to note that the quiet depiction of the setting, and the early spring drear tarnishing the upscale Long Island region’s allure, better communicates the overriding theme of depressing reality clashing with glamorous posturing.

As the days progress, more plot devices surface to turn the characters into paper-thin caricatures. Jude grapples with the daddy issues driving her into dalliances with older men (including, inexplicably, her father’s longtime lawyer, played by Oliver Platt) and into a sibling rivalry with her sister. There’s also the torch she carries for old flame Tim (Hamish Linklater), a milquetoast dope now married to Corinne. When the tepid drama does finally give way to comedy, the jokes that land do so with a feather-light impact. Unfortunately, Edwards squanders his few genuinely amusing bits by stretching them into running gags, including Corinne’s habit of comparing her life to a Mamet play and Paul’s shameless attempts to guilt-trip his kids by declaring “I’ll be dead soon.” The choice does function to portray the Lipmans as being stuck in a rut, spouting the same old bullshit, but it’s too underdeveloped to be read as anything other than the director milking his material for all its worth.

As a comedic supplement, Walken indulges in the same shtick that made him the quote-worthy toast of Saturday Night Live and Joe Dirt. His signature stilted delivery makes it easy to laugh at him, but nearly impossible to take seriously during Paul’s more pathetic moments, such as his constant efforts to embellish his Wikipedia page. Even worse, his distracting presence calls attention to the film’s most egregious flub. When Jude finally confronts her self-absorbed father with, “You’re fucking kitsch, a dancing monkey, a joke,” the statement could easily apply to Walken, who, over the years, has tap danced and hammed his way into irony. Though most likely unintentional, the reflexive moment left me wanting a more centralized story focused on Jude and Paul struggling to recognize and shed their clownish personas. The change in direction would have made for a far more interesting movie than this overstuffed, yet undercooked music-driven indie.

One More Time opens in theaters and on demand from Starz Digital on April 8th.