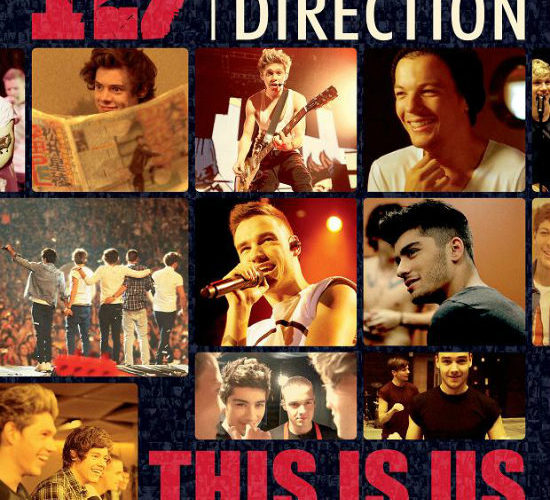 [Review] One Direction: This is Us

I feel as if I learned very little from One Direction: This is Us, a movie that is more of a consumer product or an event than an actual feature film. My guess is much of the content here is controlled by the film’s producer, Simon Cowell; so much so that a disclaimer accompanies the copyright in the credits, reminding us that the interviews in the film were for “entertainment purposes,” as if the Sony corporation would allow anything a smidge controversial in this squeaky clean consumer product.

With that said, there is a director behind this project that initially gave me hope, Morgan Spurlock, whom I admire as a filmmaker, producer and person; often, he brings a genuine sincerity to his work. While it’s not completely missing here, it’s mostly made up of stage performances lensed for 3D and behind-the-scenes travelogue moments. I imagine this is the kind of film Spurlock and his production company Warrior Poets had decided to make in order to finance meaty documentaries like the company’s 2011 film The Other F Word, which unpacks the ironies of being punk rock dads while providing a happy, normal childhood to their kids. Music can save lives and I won’t fault the teen girls that follow One Direction, as the group knows how to connect even when they’re singing someone else’s lyrics (including Blonde’s “One Way,” an obvious choice for a band with this name). For a young, awkward girl being told, “That’s what makes you beautiful” is sweet and One Direction are nothing if not upbeat, rock-infused power pop. Herein lies the problem, as One Direction: This is Us doesn’t give us much to dislike. In fact, I consider Harry, Zayn, Niall, Liam and Louis to be subhuman, all-around squeaky clean kids from middle-class backgrounds who came of age in the public spotlight after they individually auditioned for Cowell’s X-Factor. They play pranks on themselves and their fans, which are mildly amusing, but perhaps the film would be best as a pure concert film. Their stories are similar and admirable, but apparently none of them ever had had a breakdown — another reason to be grateful to Twitter, as we’ll know as soon as they do.

Spurlock achieves virtually nothing but a good time for the fans of One Direction and while I can’t blame a groupie of theirs for loving this movie, it’s entertaining but far from interesting. One Direction aims to peel back the curtain while ultimately leaving questions unanswered. It’s polished, but lacks the interesting backstory of another 3D teen idol film, Justin Bieber: Never Say Never. Perhaps Bieber and One Direction just haven’t lived enough to tell an interesting story about their career like James Moll‘s Foo Fighters: Back and Forth.

The kind of film I’d be interested in seeing is one that observes these tours and the mechanism behind bringing their bold, imaginative performances to life. Michael Jackson: This is It mostly achieved this, but what I’d really love to see is something bold. Is a 3D Ke$ha documentary directed without compromise by Frederick Wiseman really an unachievable dream?

One Direction: This is Us is currently in wide release.