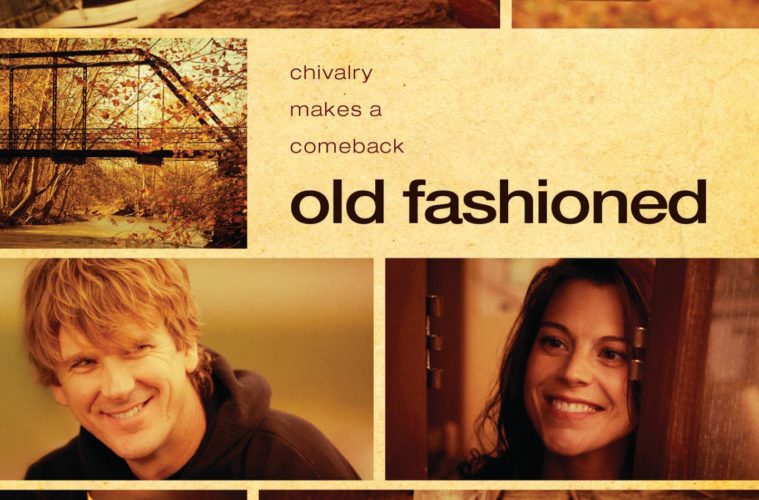 There is conservative and then there is conservative. Old Fashioned, released as a kind of counter-programing to another very creepy picture about contractual monogamy, Fifty Shades of Grey, is a very easy film to be cynical about. It’s too easy to mock old fashioned Clay Walsh (the film’s writer-director Rik Swartzwelder), an antiques dealer who handcrafts replacement parts for family heirlooms and believes he cannot be alone with a women in private until his marriage. While repairing his the kitchen sink of his free-spirited tenant Amber (Elizabeth Ann Roberts), she probes, questions and builds a friendship, even engaging in light stalking at the neighborhood grocery. She pursues Walsh and when he gives in, it’s on his terms. Those terms don’t include dinner and a movie, but do include a “pre-marriage”/  “post-courtship” workbook given to them by their neighborhood priest. Amber and Clay eventually follow each other around, asking about their respective pasts and classifying information according to the book’s schematic of “Red, Yellow, Green.”

On one hand, Old Fashioned is quite useful as a kind of counter-programing. My guess is that it reflects the ideals aspired to in fly-over country of those who may feel alienated by the kinds of films that reflect urban experiences. The bi-sexual Brooklyn hipsters of the recent Appropriate Behavior, also written and directed by its star (Desiree Akhavan), would alienate the Clay Walsh’s of the world and vice-versa. Both portray the other as square, even if both are deeply flawed themselves. Clay’s past includes producing quasi-party porn Girls Gone Wild-style videos during his tenure at the local college. Amber is a run away who essentially drops into town when she runs out of gas and decides to rent from Clay.

While Old Fashioned is insightful about what it knows, its parody of those off the straight and narrow, including Clay’s pal Brad (Tyler Hollinger), a shock jock who goes by Lucky Chucky, is off. The added creep factor for Lucky Chucky is that he’s a shock jock without a crew to bounce his sexiest ideas off of — essentially, like the film, he’s making a one-sided argument lacking nuance. The information we’re given is as offensive intellectually as those that claim someone like Howard Stern is the anti-christ based on a five minute segment broadcast some twenty-years ago. Rik Swartzwelder isn’t playing fair when it comes to the opposition and it does a disservice to the intellect of his viewers. If the dark side, or “dating” as it were, is so seductive and interesting we ought to see why that is the case; luckily, Amber provides some context.

Faith-based cinema has evolved from silly B-rate action pictures to include some truly moving personal dramas. As far as they go, I admire some of Old Fashioned, but it’s one that should have been a tad more accessible. However, like Clay, I imagine its a lack of compromise. A portrait of the working class, it’s rare to see these kinds of people on screen, as Clay considers his work, “Nothing heroic, not very ambitious.” I certainly enjoy their company more than members of the lucky sperm club that have everything handed to them, yet face manufactured conflicts. Clay, though, is too perfect: while those around him are flawed, he remains a rock even during a crisis faced in the third act.

Beautifully shot by David George in muted colors evoking the dust bowl, Old Fashioned is a mixed bag with some uneven performances and thematic material that is too messy. There is a tendency in faith-based cinema to discuss darker elements like drugs, partying, drinking, and sex with too much restraint and not enough insight, which seems to undermine the argument against these vices. It’s a shame considering Old Fashioned has something important to say but lacks the courage and insight to truly explore the world around Walsh and Amber, offering up supporting characters who are half-developed at best. Regardless, this is a step in the right direction for faith-based cinema even if, as Amber and Clay admit right on screen, “it’s too on the nose.”