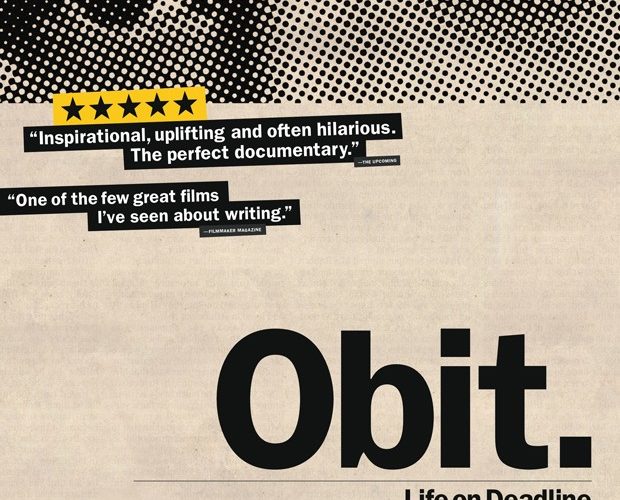 On June 25, 2009, 70s icon Farrah Fawcett passed away after a long battle with cancer. Her obituary in The New York Times recalled her “signature flowing hairstyle” and the red bathing suit poster that first made her a star. It also mentioned her work in Charlie’s Angels and her marriage to Six Million Dollar Man‘s Lee Majors. It was a succinct, tasteful piece that bid farewell to a beloved celebrity whose death was, sadly, not unexpected. But as we learn in Vanessa Gould’s documentary Obit, the sense of calm left in the obituary department in the wake of Fawcett’s demise was quickly dispelled when news arrived that the King of Pop had died. Michael Jackson’s sudden death occurred at a time when the writers were getting ready to go home, and being The New York Times, the staff knew they needed to publish something that very day. Unlike Fawcett’s obituary, which was among the over 700 advance obituaries they usually have ready, Jackson’s had to be put together in a rush.

And yet, the resulting piece is a strangely moving ode to a man who for the most part remained misunderstood. In Brooks Barnes’ sober — but never somber — obituary Jackson is revealed as a man who achieved global success, but was never completely satisfied. “It is impossible to calculate the full effect Mr. Jackson had on the world of music,” writes Barnes, and that sense of how much we’re able to reach others in life captures the essence of Gould’s film. Beyond taking us to the heart of the operation at the Times, and introducing us to the people who make a living writing about people who have died, Obit is interested in celebrating life, and inviting us to take a closer look at the people around us.

How would we describe a loved one if a Times reporter called to collect information for their obituary? Would we know the names of their parents or their spouses? Would we know about their dreams and the things they cherished? For that matter, would the people we think know us best be able to answer those questions about us? Gould chronicles the exhaustive work obit reporters go through as they prepare to write. They often do the work of detectives who must look for clues about a person’s effect in the world after they’re gone. The work seems pleasant for the most part, and judging from the smiles on the faces of the reporters in the film, they often end up doing the job of confessors, counselors, or in the most bittersweet of cases, they discover fraternal soul mates who shared their convictions and ideas, but who they know they will never be able to meet.

As reporter Douglas Martin explains, “I tend to fall in love with the people I write about,” and how could he not? Watching Obit it becomes clear that these are people in the business of life, not death. We see examples of people who left an “accidental” legacy like Enola Gay pilot Paul W. Tibbetts, who was “just a guy” who dropped the bomb that ended WWII and killed thousands of people in Japan, or William P. Wilson, the man who might’ve won JFK the election by helping him in the presidential debates vs. Nixon. Besides falling for their subjects, do the Times obit reporters also think about their own obituaries? Is their legacy and mortality constantly on their mind because of the work they do? Perhaps they have found an antidote to counteract unstoppable existentialism, and if Obit doesn’t dig deeper into that, it’s easy to forgive it for its shortcomings, for rarely does the idea of death elicit the warmth and utter charm as it does in this documentary

Obit is now in limited release.