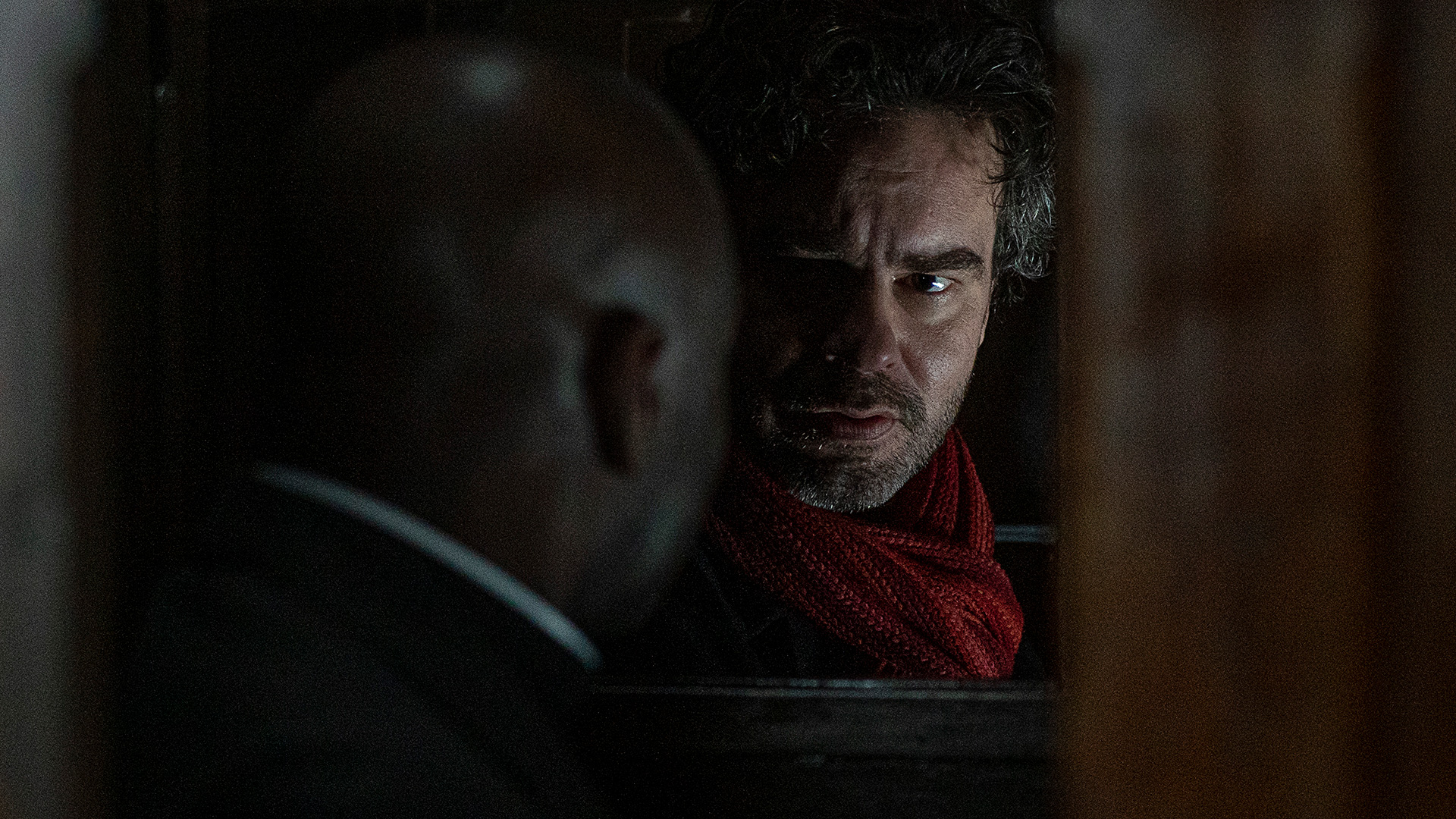 The best way to watch Alex van Warmerdam’s latest Nr. 10 is to go in blind. He practically titled it “number 10” to help with that fact—it being his tenth directorial effort taking the spotlight from anything specific within. It’s also the reason why the first half of the runtime unfolds conventionally. If all you’re watching is an actor (Tom Dewispelaere’s Günter) as his world comes undone after his director (Hans Kesting’s Karl) discovers he’s having an affair with his wife (Anniek Pheifer’s Isabel), you become lulled into a false sense of familiarity. Yes, there are strange men putting their fingerprints all over his life’s sudden implosion to force us into questioning their motivations along the way. But only superficially. At least for now.

Is Günter a good man? Should we care about his plight? Maybe. He seems to have a decent relationship with his daughter Lizzy (Frieda Barnhard)—even if she’s also following him around with duplicity. He and Isabel seem to get along to the point where we wouldn’t be surprised to hear she intends to leave her husband once the play they’re all working on is completed. Does love negate infidelity and betrayal? That’s in the eye of the beholder. As such, no matter what we think, Father Wassinski’s (Dirk Böhling) opinion is the one that truly matters. He’s the one twisting the screws (with the help of Mandela Wee Wee’s Innocence and Gene Bervoets’ Reichenbach) to ensure the volatility in Günther’s life ignites. He wants him broken.

The result is alternatively funny (Karl’s payback with the unwitting assistance of Pierre Bokma’s fellow actor Marius) and suspenseful (the lengths Wassinski goes to achieve his goals are endless, regardless of the cloth). We’re anticipating the moment described in all the synopses—Günther never thought twice about his being found in the forest and raised by a foster family until a man on a bridge (Stijn Van Opstal) whispers a word in his ear—but also the inevitable revelation for why the church cares about this very vocal atheist who’s committing adultery. What do they know? What can Günther provide them? Are they some secret sect pursuing and punishing anyone who dares violate a commandment? Anyone familiar with van Warmerdam’s work knows the answer will probably reside outside the box.

And boy does it. I’m talking the sort of wild disclosure that brings along its own 50/50 chance for eventually being revealed as false itself. That’s the sweet spot for these types of left turns, though: make it so absurd that you find yourself simultaneously inching forward to see how it plays out and settling in with a sense of know-it-all authority that it’s actually a ruse. It’s an intentional device for van Warmerdam to keep us on our toes, questioning everything and believing nothing until the players onscreen can prove it with concrete evidence. Yet we can’t be certain, even then, that they’re being 100% truthful and not taking advantage of impossible truths to sell plausible lies. That’s the fun of it all: complete unpredictability.

Thus our hook is Dewispelaere’s performance. His Günther is a man seemingly long in control and suddenly on the cusp of a freefall. It starts with Lizzy’s discovery of a medical issue he refuses to corroborate by going to a hospital. It continues with Isabel wanting to ease restrictions of their affair only to have him definitively state nobody can know. When the ways in which he reacts to the fallout are darkly comic (and violent), it proves more entertaining to realize no one cares. There’s this leeway wherein people with reason are allowed to cross the line as long as it’s not too far. And the moment we grow skeptical of this fantasy world, Wassinski and company finally bring Günther into their fold to hijack the narrative.

I don’t want to say the entire first 45 minutes are inconsequential—they push Günther where he needs to be, mentally and physically, to continue down his own personal rabbit hole—but the board is wiped clean on most of the characters we spent all that time with in Karl’s play. But because the script needs him to be unencumbered by any connections beyond the one shared with his daughter, we never question the shift as a plot hole. It’s an organic progression from normalcy to crazy—one that only works by severing ties from the former to fully embrace the latter and its potential. What was really keeping him there beyond an idea of happiness, anyway? Maybe this new road will deliver it for real.

The entire cast embraces the conceit’s eccentricities with earnestness. The things Karl does out of petty jealousy has his entire cast and crew up in arms, but he keeps a straight face while explaining it away as “artistic license.” Wassinski’s demands and Reichenbach’s actions are equally unhinged in large part due to the atonal juxtapositions van Warmerdam presents (the priest always eating and watching track-and-field competitions when Innocence arrives to talk serious business and his man-on-the-ground taking an order of “don’t get recognized” to extreme lengths). That dry humor keeps us invested while also lulling us to sleep before genial smiles inevitably turn into cold-blooded smirks. And it culminates with a finale as satisfyingly cathartic as it is diabolically open-ended, thanks to Günther’s unyielding naivete.