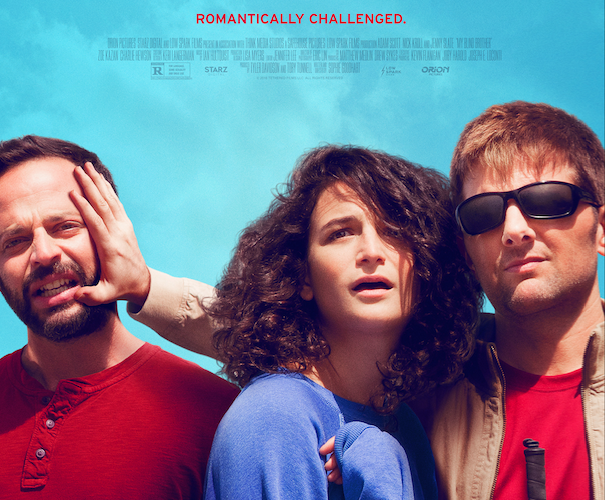 Sophie Goodhart’s charming, low-key debut My Blind Brother is a deceptively emotional experience. It’s the story of a love triangle between a deluded megalomaniac, his unappreciated brother, and a young woman who believes that she’s being punished by the universe for her recent actions, but as cartoony as that potential scenario sounds, it’s very grounded.

The two brothers in this case are Bill (Nick Kroll) and Robbie (Adam Scott). Since becoming blind at an early age, Robbie’s life has become a series of athletic feats. As we begin, Robbie has just finished running a marathon, and hours later, he’s already planning to swim the length of a local river. He’s accompanied on all of these endeavors by Bill, his brother whose life has become defined by his need to be Robbie’s sighted guide.

Their life is significantly complicated by Rose (Jenny Slate), a well-intentioned young woman who’s struggling with guilt related to an incident that she blames herself for, and finds herself forced into a relationship that she’s not invested in with Robbie. This is absolutely the type of film that’s defined by the chemistry of its cast, and Slate, Kroll, and Scott all lock together here.

Scott’s role harkens back to his infamous role as Derek in Step Brothers, but it’s far more off-kilter in its moves between sleazeball theatrics, earnest delusion, and an antagonistic lack of empathy for other people. Kroll, as well, is a far way from his expansive but niche alt-comedy routine. As Bill, he’s a rudderless stoner, but he avoids the cliches that usually plague this type of character, who’s become so familiar in the independent comedies. He’s self-pitying, but others aren’t afraid to say withering things to him about his lack of ambition, and he’s just as aware of his own shtick.

And Slate’s positively restrained here, nailing an airy, reaction-based comedy that’s closer to her film break-out, Obvious Child, than the hyperactive motormouths of Parks and Recreation’s Mona Lisa or Bob’s Burgers’ Tammy. Rose is well-intentioned, but she’s constantly just digging herself further into this unwanted relationship through mixed signals and a sense of guilt.

The interactions between these three characters is by and large predictable, but the dialogue approaches these situations with a bruising honesty and empathy. And this is the rare comedy that avoids the tonal pratfalls of dealing with a character with disabilities by fully acknowledging the character’s patronizing nature. Even her foul-mouthed roommate, Francie (Zoe Kazan) picks up on the patronizing language Rose uses to describe her relationship. “He’s not a baby elephant,” she sharply retorts after another pitying story from Rose.

Goodhart’s direction doesn’t opt for much movement, but she shows an easy faculty with her performers and an ability to illustrate how characters feel involved and uninvolved in scenes. That sounds simple enough, but there’s little pieces of direction, whether it’s a character who’s just out of earshot or the placement of furniture that amplifies the sense of loneliness in a given scene while maintaining the comedic equilibrium that comes with the context of the scene.

As much as individual scenes feel well-constructed though, My Blind Brother feels a bit programmatic in the big picture ways it hits the beats of the romantic comedy. It’s far more honest than your average romantic comedy, but it’s hard to shake that the charm of the script sometimes reads as slightness more than any intended atmosphere. And by the end, there’s a strange sense that the film is been both elongated and rushed in the way that it ends a few arcs, but it’s also an unusually sensitive romance that doubles as a showcase of three of our most talented modern comedic actors.

My Blind Brother is now in limited release and available on VOD.