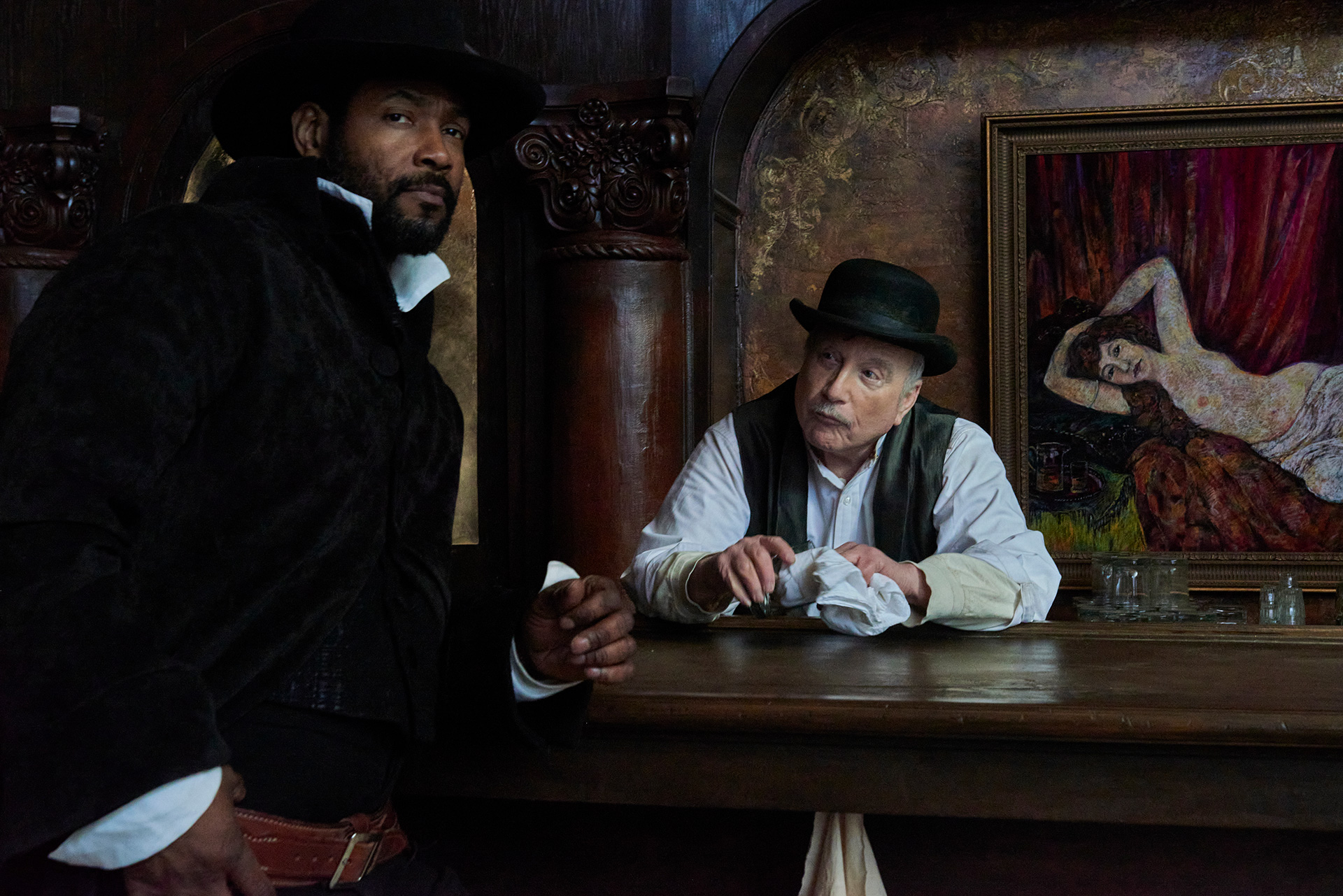 Nobody in the Montana Territory circa 1881 watches a former slave like Cicero (Isaiah Mustafa) walk into town without keen interest. That goes for friends and foes alike. Luckily for him, Yellowstone City is a progressive settlement in many ways. It has its fair share of racists and bigots to be sure, but you can’t help feeling heartened as far as seeing a saloon owned by a gay couple (Richard Dreyfuss’ Edgar and John Ales’ Mickey) who act as fathers to wayward souls like the young Dakota native working the stables (Tanaya Beatty’s Violet) or the Latina den mother of their brothel (Aimee Garcia’s Isabel). If anyone is willing to open their doors to Cicero, these are the folks. But they’re not the only ones drinking today.

Director Richard Gray and screenwriter Eric Belgau’s Murder at Yellowstone City takes pains to ensure everyone is at attention this Sunday. Sheriff Ambrose (Gabriel Byrne) is present to collect his son (Nat Wolff’s Jim) from cardsharp Harding’s (Lew Temple) table and escort him to Thaddeus (Thomas Jane) and Alice’s (Anna Camp) church while Edgar welcomes Cicero’s fellow Shakespeare lover to his bar. And as that sermon continues, local prospector Dunnigan (Zach McGowan) is running home to tell his wife (Scottie Thompson’s Emma) that he’s struck gold before riding to town for celebrations (and comfort from Isabel’s bed). It’s the type of excitement that guarantees most people forget Cicero is even there; a new mine means paying jobs and future prosperity. Everything changes once Dunnigan turns up dead.

Where most murder mysteries would proceed towards an investigation, Ambrose is quick to judge and stick with those convictions. Rather than round everyone up into the saloon to question, corroborate, and process, he takes his deputies (Jim and Danny Bohnen’s O’Sullivan) straight to Cicero’s room. There they find Dunnigan’s purse of nuggets—all evidence needed to close the case in their mind. And despite our knowing it can’t be that simple, who here will care enough to dig deeper? Those with dark pasts of their own, of course. Those who know what it is to witness horrors and escape them with a newfound lease towards what it means to be accused and / or persecuted. First it’s Violet. Then it’s Thaddeus. They’ll still have to convince the sheriff.

Gray’s film goes beyond the two-hour mark, so don’t expect things to run smoothly. The killer is smart enough to know any subsequent murders must be undertaken in such a way that Cicero can still be accused. So when another body falls it’s no coincidence that a stranger lurking in the shadows also frees him from his cell. And as Ambrose is quick to remind those who question his authority, justice in Yellowstone is about more than just truth. It’s about comfort and safety. It’s about accountability, regardless of whether the target of that retribution is guilty. To him, stringing up an outsider is the best-case scenario—it keeps the locals calm. He doesn’t upset the apple cart by lobbing accusations. He simply closes the book.

And the town mostly agrees. They all have their own secrets and ambitions. As long as the murders stop, they’ll be happy to continue moving forward. Count Thaddeus among them too. His past is slowly revealed as time goes on, but the last thing he needs is to acquire more attention than is necessary as a minister of God’s word. At a certain point, however, he can’t ignore the facts. And when presenting those facts gets nowhere with the one person who has the authority to do something (Ambrose), he’ll have to choose a side. I won’t lie: I didn’t expect what started as a slow-paced drama to devolve into an all-out gunfight. The path’s convoluted, but not entirely unwelcome; zero sequel aspirations means everyone turns expendable.

Belgau does well to keep us in the dark as far as the killer’s identity until well past the midway point. By doing so we’re able to keep guessing from the numerous possibilities. Whether a guy like Harding, seemingly the likeliest candidate due to greed and a surly disposition, or Emma—herself seeking revenge against an adulterous husband who scorned her—the gold hardly has to play a role. Heck, if enough bodies fall Ambrose might not even wait for a trial. Put a bullet between Cicero’s eyes, see if the murders stop, and make your own conclusion. It’s more reason to hope Thaddeus and Alice don’t give up on their gut instincts. How can they say God is with them if they won’t at least try?

With a sprawling cast of familiar faces, Murder at Yellowstone City reveals itself as character-driven from the start. Where an opening explosion and smoke effects leave much to be desired, the town itself does not. That’s where the budget was spent. Gray says it took almost two years (courtesy COVID) to build this Paradise Valley locale from scratch, and it’s not simply façades when the action moves from one place to another. The saloon, stables, jailhouse, and church are fully formed for sneak attacks, fugitive harboring, and whatever theatrics might be necessary to advance the growing sense of unease amongst residents. All bets are off once the shooting starts—nobody can afford to be a bystander.

That includes young Josephine (Isabella Ruby), perhaps the only true innocent. She’s the heart and soul of the whole, and there’s a lot of complexity surrounding her: a keen sense of character for placing her allegiances when chaos breaks loose. Those who should be the town’s protectors (the law) are firing against a man of God. The men riding with them are hurting those she calls family. When everyone else is shooting for their own survival, she’s looking to save those she loves. Ambrose thinks he is too. He’s simply been clouded by grief and rage—a good man corrupted. Thaddeus is the opposite—a bad man saved. The script isn’t without its messiness, but that dynamic remains clear as day.