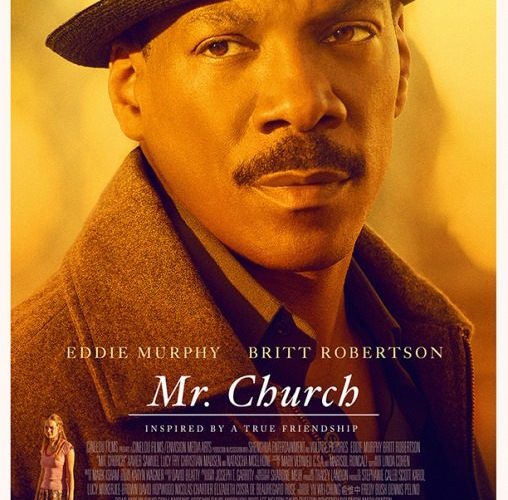 If you didn’t know what you were getting into upon sitting down for Bruce Beresford‘s Mr. Church, you will following this onscreen text: “Inspired by a True Friendship.” The vagueness of this statement notwithstanding, the words ooze enough schmaltz to prepare you for the melodrama of death and miracles screenwriter Susan McMartin has concocted. Maybe she based it on a friendship she had with an adult male who become her father figure in a time of need or perhaps the entire premise is a purely fictional construct surrounding feelings experienced within a relationship devoid of similarities besides being between two people. All I know for certain is that those involved didn’t just want to make any old tearjerker; they sought to squeeze their audience dry like a sponge. Despite the plot dealing with the cook (Eddie Murphy‘s Henry Joseph Church) a married dead man hired in his will to care for his lover (Natascha McElhone‘s Marie Brody) during the six months she has left to live (breast cancer), the heartstrings aren’t pulled as sharply in the first half as they will in the second. I was actually invested for six years of this fifteen-year relationship because young Charlotte “Charlie” Brody (Natalie Coughlin) acknowledged the situation’s absurdity. Little Miss Sassy Pants goes so far as refusing the grits this stranger who appeared in their kitchen without warning made because she wants Apple Jacks. She tells her mother to fire him because they’ve been fine without anyone else before. But — shocker — she doesn’t know her mother is dying.

The film’s narrated by an older Charlie as played by Britt Robertson, constantly remarking in hindsight about details for which she was left in the dark. Six months to live stretches into six years, Marie’s health ever-worsening (I guess not telling her didn’t matter considering the discovery of Mom with IV tubes sticking out of her arm at home arrives without fanfare) despite her enduring spirit to see Charlie go to prom. It’s a sweetly told journey of familial love and compassion, Mr. Church brightening up their days with gourmet food and good literature. He becomes caretaker and father, seemingly asking for nothing in return besides a moratorium on inquiring about what he does at home. This trio’s bond is authentic despite its near-fairy tale delivery. And then things fall apart. Tragic revelations and unfortunate mistakes come to the fore with Robertson relaying details in anger or frustration. Does any of it unfold, though? Of course not. Why go into dramatic depth with stuff that matters when it can be swept under the rug with a smile and the words, “It never happened again.” Finally we start to see glimpses of Mr. Church’s private life, but they’re ignored beyond coloring his compassionate soul by day with darkness by night. Finally we see how well-adjusted Charlie turned out because of his influence — despite the reason she comes back before finishing college — opposite best friend Poppy’s (Lucy Fry) tumultuous high-life masking a deep-seeded personal resentment, but platitudes save the day. There’s always a “bright side.”

This mantra cultivated by McMartin’s script gets infuriating because that’s not how it always was. Pain was expressed at the beginning — an emotionally charged blow-up between McElhone and Robertson in the bathroom proves a major highlight for the film. The same goes for Murphy’s portrayal of Mr. Church as a kind-hearted sweet man when not questioned about his identity removed from these women’s sight. Being in the Brodys’ home allows him to be something he never believed he could become because of the demons haunting his soul. But without Marie to give him and Charlie purpose, they both fall back into potentially dangerous patterns of isolation. Mr. Church and Charlie need to care for someone, but letting the other fill that role never quite seems to be enough. So as one life dies (Marie), another is born (McKenna Grace‘s Izzy) to take her place. And no matter how effective Murphy (great in his first film role in four years) or Robertson is, the fact they are driven by external forces rather than internal can’t be ignored. Fate intervenes way too often with a mawkishness that sours any goodwill the film earned in its first forty-five minutes. Everyone on the periphery whether Fry’s Poppy, Xavier Samuel‘s Owen, or Christian Madsen‘s Larson ultimately reappear carrying a lesson for Charlie to learn and pass onto Mr. Church through newfound empathy. These unlikely friends watch as their trajectory comes full circle from sure-handed cook and hurt girl to broken man and loving daughter. Love flows freely without a shut-off valve.

There’s definitely a place for this type of film and I think its target demographic will love it for hitting all the right notes necessary for a good up-lifting cry. But don’t expect anything more. The characters are less complex than the premise with its destiny-driven machinations steeped in coincidence and good fortune. Death looms, but only as far as giving the filmmakers reason to inject an abundance of hope. The poor charity case daughter of a single mother and the introverted son of a father he never satisfied cross paths to discover they’re the luckiest human beings on earth. Does that earn an “Aww”? Stay away if not. While having someone supply you purpose to change is pure at heart, how it unfolds here is pure cliché.