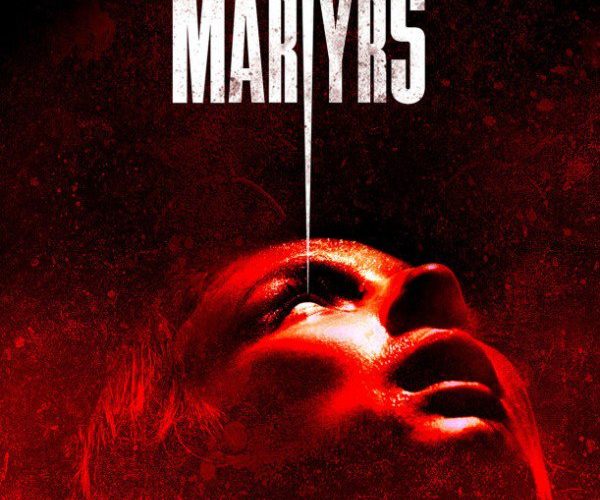 Directed by Kevin and Michael Goetz (Scenic Route), and based on a script by Mark L. Smith (who, as the co-writer of The Revenant, knows a thing or two about grueling violence), the new Martyrs begins much like its predecessor: with a little girl named Lucie (Ever Prishkulnik) escaping an anonymous warehouse where she was kept prisoner and tortured by mysterious individuals. She then lands in a Catholic orphanage, where she’s befriended by young Anna (Elyse Cole), who seeks to protect Lucie even as she questions the damaged girl’s horrific encounters with a possibly imagined monster. Cut to ten years later, and Anna (Bailey Noble) has to clean up a very real mess when Lucie (Troian Bellisario) calls on her after gunning down an entire family in their stately home, insisting that the thing haunting her pointed them out as her captors. As the two women work to hide the bodies, Anna soon discovers the truth behind Lucie’s terrible past and present visions, and the secret society responsible for them.

Whereas Laugier’s creation forces the viewer to endure and consider every punch, kick, slap, and slice inflicted upon the female protagonists, the Goetz version prefers to shy away from or downplay the brutality, which results in the rare case of a film suffering from gore deficiency. The neutering and sterilizing of the vicious key elements doesn’t end there, as Lucie acts far too calm for someone in the throes of vengeful rage (a quality that could be attributed to Bellisario’s lackluster performance), and every bruise and cut are strategically placed so as not to diminish the comely actresses’ sex appeal. Even the villains lack bite, especially when compared to the more chillingly ambiguous ones revealed in the original film. (I won’t spoil it, but think of Rosemary’s Baby.)

Most disappointing, however, is the apparent unwillingness to explore themes that would have added relevance to an otherwise gratuitous concept. For one, much of the original film’s power came from featuring two young women of color — Mylène Jampanoï and Morjana Alaoui, who are half-Chinese and half-Moroccan, respectively — and the disturbing political and cultural implications of their being preyed upon. That the new version eschews any such possible weighty or controversial statements by starring two white women, one of whom dresses like she just came from Bible study, makes this no more than another dumbed-down, Americanized take on a foreign hit that, at the very least, tried to say something.

Martyrs is now playing in select theaters and hits VOD on February 2.