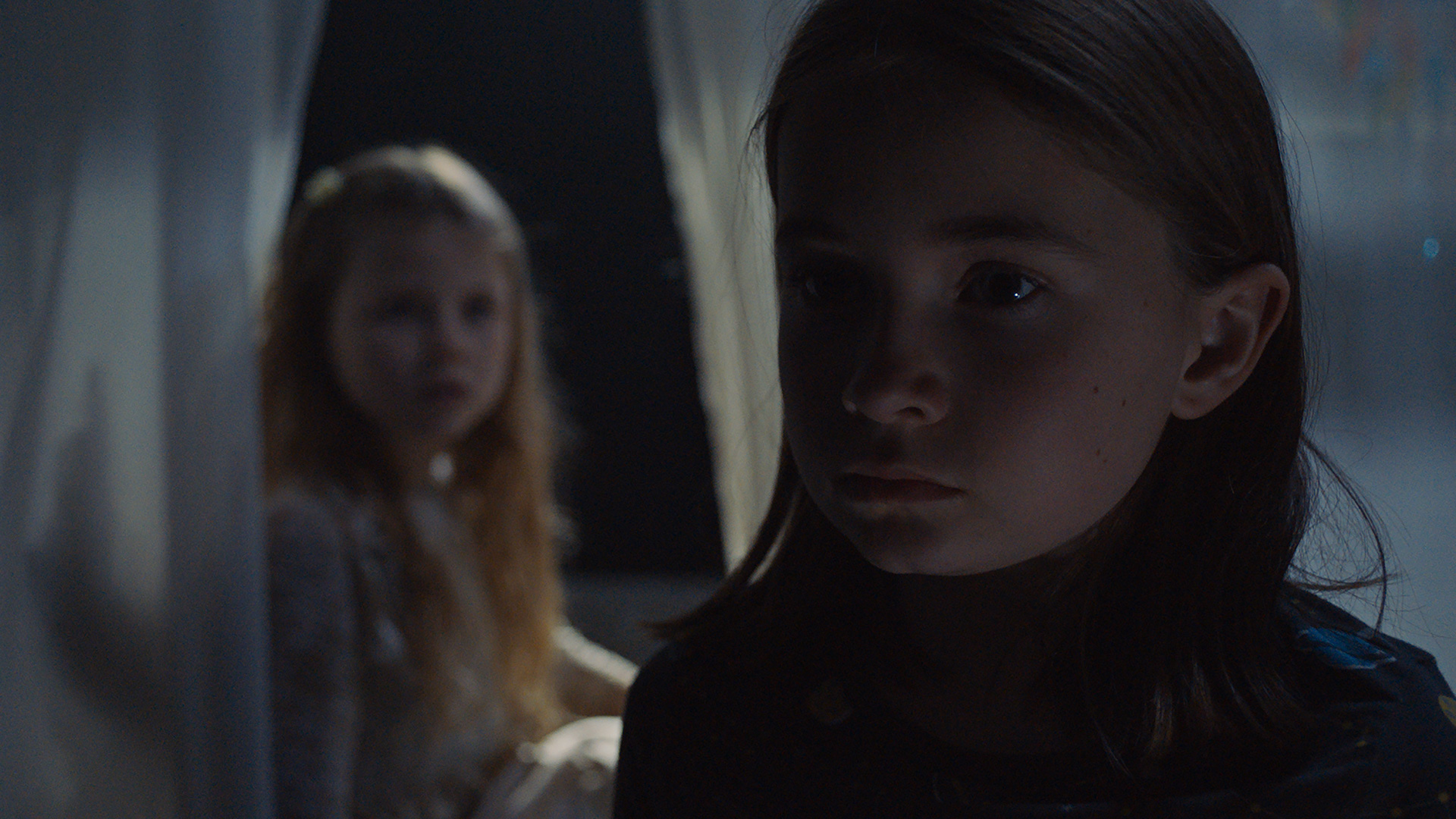 Ten-year-old Leah (Kiera Thompson) is caught watching her family like an outsider looking in. Her much older sister (Hannah Rae’s Bex) is about to leave for college and the milestone has seemingly thrown a wrench into their otherwise simple lives. While their father Thomas (Steven Cree) treats it like a celebration, thanks to his faith as the pastor of their local church, their mother Sarah (Denise Gough) appears distracted and perhaps even angry. She begins having nightmares, retreats from others, and becomes lost in a past Leah knows nothing about. Whether coincidence or fate drives the young girl to unearth the answer from within the locket Sarah wears around her neck is up to you to decide. Once it’s out, however, there’s no putting it back.

How it arrives is in the form of a girl (Sienna Sayer) just about Leah’s age. She has no recollection of her name and believes herself an angel yet to grow her wings. While tensions mount in the aftermath of taking the lock of hair Sarah had been keeping safe, a friend—secretive or not—proves exactly what Leah needs. Bex is always bullying her. Thomas is always blessing the neighbors. And Sarah is even more reclusive than before. The chance to play a game of “two truths, one lie” becomes a nice distraction each night, even if the stranger’s lies keep sending her on an unwitting scavenger hunt that leads to memories long since buried and ever more damaging to Sarah’s increasingly fragile psyche.

While it’s hardly difficult to discern who Sayer’s character is to this family, writer-director Ruth Platt makes certain to shroud the circumstances behind her absence in enough mystery to keep us invested. The result can feel slow-moving, but no part of Martyrs Lane is without specific purpose. Each night’s “lie” takes Leah to a new place on the property she’s never thought to play with, each discovery adding a little more clarity to an emotionally heavy truth that’s never been fully confronted (let alone accepted). And the juxtapositions born from each aftermath cut deep too. Look no further than the moment Sarah realizes the hair is missing. Leah is receiving her First Communion, yet her mother is compelled to loudly leave in search of ghosts.

What, then, is this specter’s motives for visiting? Is she Leah’s guardian angel like she says, trying to illuminate that which her family has kept in the shadows? Or is she a force of chaos seeking to use Leah as a weapon against Sarah, knowing that everything the girl says holds dual meanings: one to entertain and one to provoke? As the nights progress, so too does young Sayer’s appearance. The pristine white dress becomes dirtier, her cherubic face grows whiter, and eventually blood can’t help flowing from her nose and other newly manifested wounds. Platt expertly positions her as good and evil, hope and despair. By making her presence known to expose her omission, Sarah and Leah’s strained relationship can either heal itself or be irrevocably broken.

The psychological import of that is quite profound. Why does this stranger have no name? Because those who remember it refuse to speak it aloud. They have all but erased her from existence, to the point where Leah lived ten years without even a whiff. So of course she opens her window when the smiling girl knocks, instinctively hiding her under the sheets when they hear footsteps outside her door. But she also isn’t dumb. Leah sees the impact of parroting her friend’s jokes and being found where she never used to go. She understands the changing atmosphere and the coldness directed at a neighbor who had always been so kind (Anastasia Hille’s Lillian). To dare tell her visitor to leave, however, only raises the stakes.

I think Gough’s performance is easy to discount because she’s often seen in the background, but she delivers an unforgettable descent into anguish and grief. Sometimes Platt shows her on the fringes or shields her from view until the moment of reaction, but she’s always there to hear and see every object or word that’s been planted in Leah’s possession to incite her. And that means the job of carrying the film falls to Thompson. She’s the one we follow, the one left to experience Sarah’s pain while trying to process what it means and her role in causing it. Sayer has thus far received the accolades (most recently with a special jury mention from the Fantasia International Film Festival), but Thompson shoulders the more difficult role.

That’s not to say Sayer isn’t great. She must juggle angelic innocence and demonic rage in a way kids her age shouldn’t naturally need to, but her character is the agitator. She’s the one asked to go big so everyone else is forced to dig inside and face their fears. It’s why I personally recall less of her theatrics during the climax than I do Gough and Thompson’s struggle to survive a no-win scenario that paints Platt into a corner to choose the happy ending or the bittersweet tragedy that ultimately makes the most sense. To her credit, the filmmaker finds a narrative loophole to maintain her balance while providing a bit of both. Rather than a cop-out, however, its choice to remember feels right.