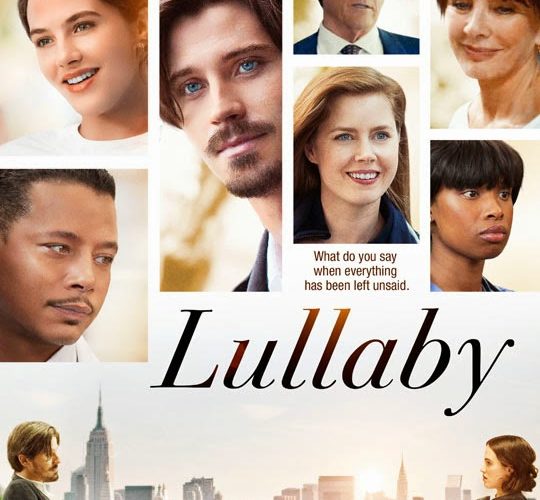 Lullaby is the kind of film that’s best described as a having been cobbled together from an indie scrapyard. Written and directed by first-time filmmaker Andrew Levitas, it’s a film with little to say in spite of a few compelling plot turns, all of which failure to materialize into anything that’s interesting. Here you’ll notice recognize scraps of Garden State, Igby Goes Down, and Once all combined without the intended effect. The film is, sadly, as entitled as its lead Jonathan Lowenstein (played by a moping Garrett Hedlund), a rich kid who forgoes NYU (of course!) for a music career in LA. We first meet Jonathan as he smokes in a bathroom on New York-bound plane, flirting with the flight attendant he saves himself from the wrath of an air marshal and arrest — oh, to be rich and white.

Told partly in flashbacks, we learn early on his father Robert (Richard Jenkins) was a moderately successful businessman who made sly financial deals. We suspect he never built a factory in Iowa with his bare hands, despite claiming to come from modest means. His kids can’t say the same, although they’re about to get a rude awakening upon the arrival of his daughter Karen (Jessica Brown Findlay). Robert tells his kids upon his impending death the family fortune is going to be donated to charity and Jonathan won’t get to record his demo after all; I suppose he’ll have to get a job as a barista. A motif of filmmakers of a certain generation, it would appear, is to tell stories about entitled, spoiled even kids dealing with parental death (see also: the recent DOA VOD release The Big Ask). The trope is awfully uninteresting and Levitas covers ground, even with a great cast, which has been explored endlessly before. When Emily, Jonathan’s ex whom he stalks later in the first act, tells Jonathan he’s cold and lacks a heart, he tells her that assessment is a cliché. Apparently Jonathan is unaware his whole life is one big New York indie trope right down to Emily, played brilliantly, as usual, by Amy Adams.

The film’s unique turn comes late in the second act as law student Karen is forced to make her case to Robert why he shouldn’t essentially commit suicide with the assistance of his attending physician, played by Terrence Howard. Jonathan, tasked by his father with some Jewish responsibilities (here the film is actually unique in its exploration of faith, even if its by no means a faith-based film of substance), is rather ambivalent, telling us in a voice-over early on that his father has been dying for 10 years.

Lullaby clunks along with little substance, despite the presence of top talent, including Jenkins, Howard, Adams and Anne Archer as mother Rachel. Hedlund, a gifted actor whose had more challenging roles, isn’t given much to do here in a script that’s too thin and often just not dramatically exciting. Perhaps the idea for a great film was present — it certainly attracted top-tier talent. In spite of the ensemble, this film is premiering right where it belongs: on VOD with a contractual release at the Quad Cinema in New York. Unfortunately that theatrical release just adds fuel to Manohla Dargis’ pre-Sundance commentary; here’s a film with nothing new to say despite a couple of scenes that individually work. In other words, this is an indie as delusional and entitled as Jonathan.

Lullaby is now playing in New York at the Quad Cinema available on VOD.