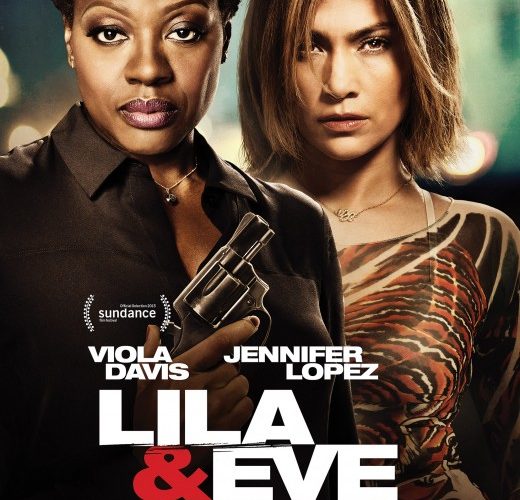 A movie isn’t necessarily ruined because its so-called twist is easily deciphered, especially when the reveal is less for shock value than depicting the psychological struggle of grief. For Lila Walcott (Viola Davis), the loss of her son Stephon (Aml Ameen) as an innocent bystander to a drive-by shooting has drowned her in exactly that emotion. It’s pushed her to the brink of sanity, acceptance, and quite possibly redemption right into the arms of a like-minded individual languishing in almost identical circumstances. Lila befriends Eve (Jennifer Lopez) at a support group for mothers whose children were murdered and while the rest wish to hold their fallen sons and daughters in their arms one more time, these two covet vengeance. The former continues to hope the police will find answers, but the latter readies to pull the trigger herself. Lila & Eve could have easily found itself amongst the Lifetime stable of content and yet Pat Gilfillan‘s script has almost implausibly made its way to the big screen thanks to the clout of star and executive producer Davis. The question still remained, however, whether the end product would own its over-the-top plotting of a single mother going vigilante on the gang responsible for her son’s death or if it would hold true to the self-constructed notion it had something important to say. I assumed the former considering director Charles Stone III of Drumline and Mr. 3000 was at the helm, but the opposite proved true. Lifetime’s sensibility for the severely dramatic won.

Would the other direction have been better? Perhaps. There’s something endearing about a film embracing its audience’s desire to laugh alongside it rather than at. While Gilfillan’s story does ultimately devolve into sentimentality for a blatant play at heartstrings and a win for mothers the world over, what happens beforehand is serious enough to prevent you from laughing—even ironically. Trust me, I wanted to and yet everything onscreen forced me to hold it in because Lila and Eve always end up with gun drawn and remorse absent. It’s not about enjoying absurdity when the filmmakers actually supply cold-blooded, systematic payback of the characters’ fantasy. Even when Lopez’s Eve pushes too hard—impossibly hard to the point you’re wondering whether she’s a rival kingpin using Lila as a patsy to erase the competition—chuckling still felt verboten. Lila & Eve exists in a sort of purgatory as a result. You want it to be “so bad it’s funny” and yet it refuses to bend to that label. Davis’ performance is a big reason for this because she is giving her all and running the gamut of emotions to portray the crippling sense of loss she feels. It’s not like she’s out for blood from the start. She tries to leave things in the hands of Holliston (Shea Whigham) and Skaketti’s (Andre Royo) task force, but they have no leads and no traction with superiors to find some until a white boy is killed in connection with the case. Considering Lila and Eve are responsible for said collateral damage, one could say they are helping the police by giving them the resources justice won’t provide.

But she also begins to replace what soul she had left with an empty pit of rage. Because while it’s Eve who initially takes point—pushing her new friend forward to do what she couldn’t when her daughter was killed—Lila’s soon the woman threatening hardened criminals. She becomes so wrapped up in the case and Eve’s infectious confidence that she unwittingly neglects her living son (Ron Caldwell‘s Justin) and prospective love interest (Julius Tennon‘s Ben) to deal with her warped catharsis alone. Add the fact that Holliston really does want to find the killer—ultimately pitting him against the Lila with the law caught between them—and you’ll see the film as the steady stream of clichés it is. Everything comes down to empowerment and watching these fictional characters do what we never could. This is why a more tongue-in-cheek approach would have served it well. Lopez wants to take it there with her perpetually stoic, badass expression and contented smile after each body falls, but the rest of the cast is trying to keep things “real”. Both Davis and Whigham shine in this respect because you do believe their internal conflicts and motivations, knowing one will come up empty-handed by the conclusion. Michole Briana White and Yolonda Ross bring some authenticity with their own grieving mothers clinging to sanity as Davis loses the grip on hers and Ameen delivers some much needed heart in flashbacks as the son who pushed against his mother’s love and worry like most eighteen-year olds do. However, the more overwrought and convenient these little injections of optimism and hope, the more you wish things went crazier.

Crazy in the infrastructure of the bad guys, in Davis going all Al Pacino from Scarface on everyone, or in watching more people she loves dying as a result of her actions. But alas, none of this occurs. The ones responsible for Stephon’s death form a domino set of hierarchy, Lila always shows remorse alongside her relief after shooting someone, and she adjusts when things get tougher for her family so they’re kept safe. The plot eventually takes a very distant backseat to hers and Eve’s goals as what they do becomes inconsequential in the wake of why they’re doing it. And this is where that “twist” comes back in because it’s actually more main conceit than surprise. Lila & Eve embraces its psychological thrills rather than action, but it never fully commits to what that decision entails.

Lila & Eve is now in limited release and on VOD.