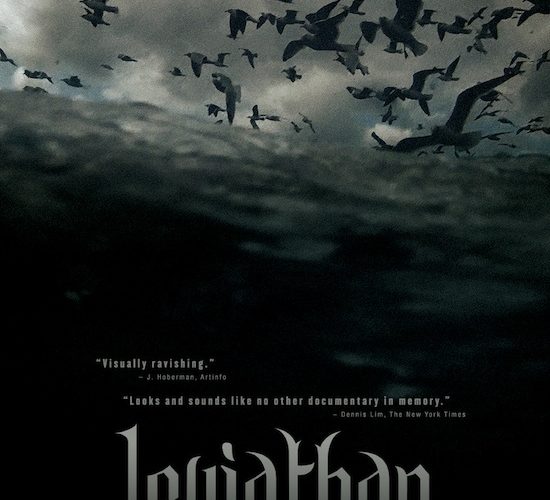 To say that Leviathan is not for everyone is to, put it simply, too simple. Even those who hear that something “isn’t for everyone” and take it as a challenge to their intellect and adventurousness may find that Leviathan is not for them, as the film attempts nothing less than to purify documentary cinema as a whole. Directed by Lucien Castaing-Taylor (Sweetgrass) and Verena Paravel (Foreign Parts), if at any point during the experience it occurs to you that the film is directed by people, it means the illusion is not working. The filmmakers shot with a fly-on-the-wall aesthetic that is roughly one-part neorealism and two parts found-footage monster movie.

It’s an exclusively digital effect, achieved by mounting tiny cameras in every crevice of the ship, in plastic bags that are then tossed into the sea, and anywhere else that borders on the edge of implausibility for all but the smallest cameras. Most takes run on for minutes, often depicting nothing more eventful than a camera bouncing along the water; if Leviathan wanted to be a display of the advantages of digital cinema, it easily could be. But the illusion that Castaing-Taylor and Paravel are going for is much grander. They wish to suggest that nature itself made the film, as if the selective inclusion/exclusion of documentary film is a system that needs to be deconstructed and rebuilt from the ground up, in a way that completely removes authorship from our idea of non-fiction cinema. Of course, despite the directors’ intentions, they are of course making the film. It sounds obvious, but if Leviathan is working on you, it won’t be; there is one instance where somebody looks at the camera a bit too knowingly, but otherwise, you have to be paying attention if you want to break the spell. Editing is almost invisible, save for a couple of time lapses, and even graphic matches seem like the work of Mother Nature, not a God-hand behind the camera. Very, very little happens. It’s a day or two of commercial fishermen at work, reeling in nets full of bycatch that are then dropped all over the ship; fish and other sea creatures are beheaded or otherwise mutilated quickly and emotionlessly and the camera will stay at the bottom of a pile as if to remind you what the still-living fish at the bottom is going through.

Other times the camera will sit helplessly on the floor as the fish flop around in a couple inches of water and force us to watch them for a couple minutes. Nature is trying to tell us that it is helpless and what we are doing is wrong, all it can do is show us reality and expect us to understand. It’s fair to say that, to re-appropriate a famous Francis Ford Coppola quote, Leviathan is commercial fishing. For all it has to say about documentary, there’s plenty to say about the industry, too, and that means it will linger on gruesome details for an almost frustratingly long amount of time. Occasionally, those details are gross, but more often they are disturbing—a trapped bird trying to escape, for example. You might go a day or two before you eat seafood again.

Much of this effect is achieved through harsh, distorted sound. The sound of metals rubbing together or waves knocking against the boat’s hull is the film’s only score. It’s wonderfully mixed, engulfing the viewer and very often times forcing you to recoil merely because of how raw it is; with the visual aesthetic and the title “Leviathan,” you could almost be forgiven if you thought this was a monster/disaster movie. Imagine you are trying to sleep in a noisy environment devoid of rhythm or consistency but always loud. It’s impossible to tune out, and so all you can do is listen to it, hoping to find something a bit less grating. Leviathan’s sound mix never stops grating, but that’s precisely why it works so effectively. When you see these fishermen apathetically skewering and dumping fish and crustaceans all over, the ugly noise influences how we think of them; man is vilified, nature is revered, and we don’t even realize that two people have created that illusion. There is a little bit of dialogue in Leviathan, but it’s never anything we can understand; the only time we can understand something clearly is in the film’s penultimate scene, a self-reflexive shot that very obviously edits sound in after the fact in the form of Deadliest Catch and commercial soundbites and draws enormous attention to how constructed the film is despite its previous attempts to dispel such a notion. It’s an illusion-shattering effect, one that calls the social discourse into question but draws further attention to Leviathan’s documentarian innovation. It’s also a move that seeks to protect itself from criticism.

Like any other film, this was made by a motivated artist, and trying to hide that just makes the whole thing even more suspicious. This scene, however, shows an acute awareness of precisely that, and although it’s a step ahead of its audience, it also makes Leviathan feel more experimental and less confident than the assured determination of all that came before. How can we walk out convinced of the evils of commercial fishing if the filmmakers give themselves away? And does this make the documentary a comment on documentary and the impossibility of removing authorship and bias, or should we still herald the innovative style that it presents? It’s a sudden introduction to self-reflexivity in a film that runs purely on the power of cinematic illusion; it goes without saying that your mileage may vary, but if you are still on board when that scene arrives, it’s doubtful that anything will make you ask these questions so intently.

It’s that moment and a few less ostentatious ones like it that make it clear that, bold as Leviathan is, there really is nothing else like it, and it can be frustrating in bad ways, too. It can be redundant or obvious, and it can also wander aimlessly, but not in a way that it is devoid of narrative or drive, but in the sense that its commentary vanishes. In particular, the final shot and its continuance over the credits bores us with more of the same, and some might find the finer details such as a beer can caught with the fish or the aforementioned bird as being insultingly heavy-handed, again breaking the spell of nature-as-documentarian that Leviathan is hinged on. But largely, it’s shocking, innovative stuff, a visual-feast intertwined with social commentary, a comprehensive and ambitious statement on documentary cinema, and an audacious display of the power of sound as one equaling the power of images. Many will feel condescended or lied to and endlessly frustrated. Many may have their outlook on documentary film altered altogether. It’s a thought-provoking work of the avant-garde worthy of every ounce of a devoted cinephiles attention no matter which verdict they reach.