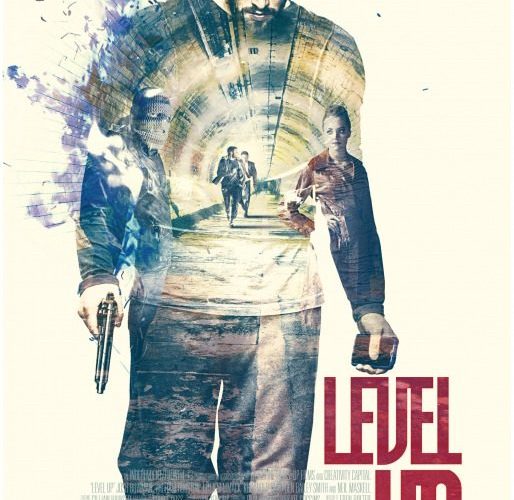 You watch enough hero-backed-into-a-corner action films like Crank, Taken, or The Equalizer and you start to find your mind drifting away from the sheer monotony of their progression. Their characters are built to survive these situations no matter how dire because people want to see the good guy win. They want to see him risk everything, travel in the murky areas of morality, and be the badass society doesn’t allow them to be, but that ultimate victory is key because escapism only works when your surrogate onscreen walks away. How else could there be a sequel? But what happens when a Joe Schmo is thrust into proving his mettle through the same type of scenario? What would those films look like through a Shaun of the Dead filter?

The answer arrives in the form of Adam Randall‘s Level Up, a high-concept thriller wherein slacker Matt (Josh Bowman) is torn from his videogame existence to engage in a nightmarish game of blackmailed carnage. Co-written by Gary Young — the man behind Michael Caine’s revenger Harry Brown — the film’s full of darkly humorous moments due to its star being unable to flip that “killing machine” switch. With girlfriend Anna (Leila Mimmack) kidnapped by the same rainbow colored ski-mask-wearing brutes who outfitted him with a lockbox vest carrying a package for the enigmatic Dmitri (Neil Maskell), Matt has no choice but to follow the instructions they supply. This means surviving unnamed assailants (William Houston‘s Businessman), having sex with strangers in lingerie (Christina Wolfe‘s Kya), and being tasked with murder. Randall and Young utilize the usual tropes, tipping them on end with an everyman protagonist more scared than full of adrenaline-fueled rage. Matt’s confused and out of his element. He does what he can to survive in the moment unable to think about how current actions impact the future. If he stabs an enemy in the shoulder with a chair leg, he can escape. There’s no stone-faced calm to kick his victim unconscious or slit his throat. If anything, the sheer fact he got away and drew blood is enough to keep him reeling beyond comprehension. And he’s not a ladies’ man ready and willing to sleep with an attractive woman throwing herself at him either. Matt’s awkward, in pain, and lost inside a game with actual stakes.

Level Up feels familiar without boring us because we’re unsure how Matt will get out of his next predicament devoid of the skillset necessary to fight his way through. It’s not about watching him mow down extras with quick cuts and synth beats; it’s him getting pummeled until his assailant accidentally knocks himself out or someone comes to the rescue. It’s Matt puffing out his chest with bluffs to extricate himself from a dangerous swarm of criminals, his heart sinking when what appears to be a success potentially gets foiled by his inability to ride the vehicles or use the weapons he’s so proficient with on his Playstation. There are no spawn points if he gets killed, but is that enough to force him to pull the trigger? The action (or inaction thanks to Matt’s inexperience in the Britain’s underworld) calls to mind countless memories of friends playing games or watching YouTube clips with rapturous applause. You think about the “Boom! Headshot!” meme and that sense of pure machismo at cold-blooded murder knowing Matt’s the kind of guy to scream those words when moving through a first-person shooter. Players love to live vicariously through games to release their rage on pixels rather than flesh and blood, many creating personas light years removed from their true selves to fit in the Gamergate mold of chauvinistic cretinism. How many of them would do the same in real life if a gun were placed in their hands? Taking a life — no matter the justification — isn’t something to take lightly.

And Matt’s no exception. He’s literally vibrating with fear throughout this ordeal because he doesn’t know who to trust or believe. The choice to kill a drug dealer (Leon Annor‘s Keon) or know that Anna would never be seen alive again isn’t binary. He doesn’t know if the person on the other end of his phone will hold up his end of the bargain or if killing Keon won’t kill him considering Calvin (Cameron Jack) and his boys are outside the door with bad attitudes and guns. No choice is simple, not even the one forcing him to decide what kind of man he is. Matt can be his gamer persona, shutting off his brain to the extinguishment of lives, or the sweet if listless man Anna loves. This is the film’s appeal: a sense of humanity its brethren generally strives to ignore. The question isn’t whether Matt survives physically, but if his mind and soul stay whole in the process. Such an angle allows for out-of-the-box thinking and maneuvering both for the character and the genre since he’s trying to run away from danger rather than deescalate it. Bowman never becoming menacing is key because he must resonate for us to project ourselves on him without idealized fantasy. The camera moving back to expose an intricately pervasive web at the control of what’s happening adds a voyeuristic notion that isn’t quite fleshed out as more than an “a-ha” detail (think Nerve without audience participation), but it does infer upon Matt’s decisions in an authentic way.

We gradually learn more about what’s happening — how Matt’s enemies are more like him than he realizes — until the whole thing blows open, his attitude and confidence evolving. Unfortunately, some of Level Up‘s deeper motivations feel tacked on as a twist with Randall and Young moving too far beyond Matt to introduce a larger scale epidemic than interest craves. We care about Matt and Anna’s wellbeing, the rest is concept coloring that sparks his actions despite our not understanding the full picture until his story completes. Because certain revelations don’t alter the journey experienced, though, their existence after that completion is somewhat superfluous. Matt’s our focus, the rest cool for cool’s sake. I would have enjoyed fewer answers setting up sequel potential because his trajectory succeeds through mystery.

Level Up opens in limited release on August 26 and hits VOD September 26.